Team from HMCS Charlottetown lacing up for annual Run 4 Wishes 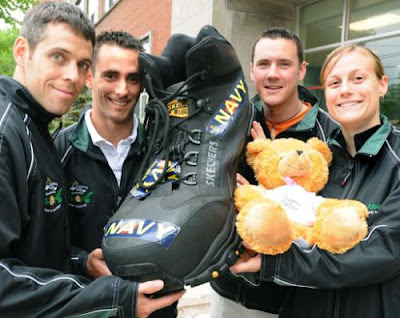 A team of military runners is lacing up its boots to help grant wishes to children.
Run 4 Wishes is an annual event hosted by HMCS Charlottetown for the ship’s charity, the Children’s Wish Foundation. This is the sixth year for the event.
The group of seamen participating in the event will run a total of 364 kilometres over five days in August, travelling from North Cape to East Point and many places in between.
Leading Seaman Michael Murphy has been involved with the event since it began in 2003.
He said it has received a lot of support since the first year when they raised $3,000 for the charity. During last year’s run, they raised $32,000.
“You can see it has gained a great deal of momentum,” he said in an interview.
The number of runners has also increased from four to 25.
Murphy said it helps that they’re running for such a heart-warming cause.
“It’s for the kids so it’s an easy sell.”
So far, they’ve been able to grant wishes to six children, and want to grant several more with the $40,000 they hope to raise at this year’s event.
“The key focus is we’d like to grant four wishes this year,” he said.
The event’s symbol is a large sneaker the team picked up while in New York City in 2004 during Fleet Week.
Murphy said they saw two large sneakers there, and after some persuasion were able to take one home. While it was originally for one of the crew member’s sons, they decided to use it for the run instead.
The boot will also travel with the runners to several locations, but it won’t be on foot.
“There’s going to be a military truck carrying the boot around,” he said.
The run will take place Aug. 5-9, with runners travelling an average of 73 kilometres a day.
At the end of each day, they’ll stop their run at various Sobeys locations in the province, where a barbecue and bouncy house will be open to the public and donations will be accepted.
Anyone who wants to make a donation can also stop in at the Children’s Wish Foundation office, located at 22 Allen St. in Charlottetown.
During the run, the boot is scheduled to stop at several locations for donations pickups as well.
Posted by jypsy at 7:44 AM