The Freeze Your Gizzard Half-Marathon 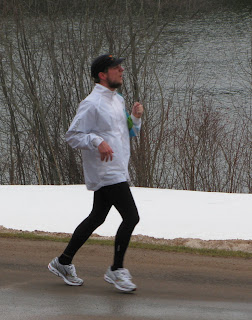 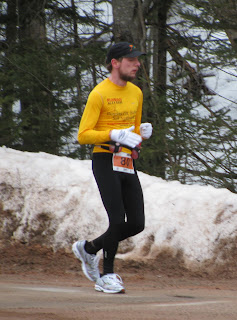 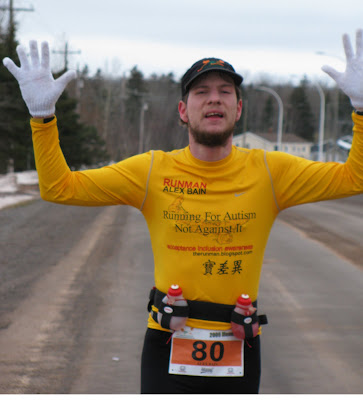 It was cloudy and 1 degrees and windy. The Freeze Your Gizzard Half-Marathon and 10km at Atlantic Fitness Centre in Montague.

The course in Montague and country side double loop.

I wore a new shoes. I ran the first loop was slow down at 6km big hill in second loop I wore gloves and jacket off to warm enough.

This Friday I will attend PEI Roadrunners Award Banquet. I made a slideshow. 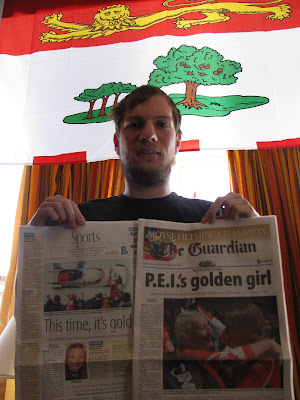 http://www.theguardian.pe.ca/index.cfm?sid=329653&sc=98
Whistler, B.C. — Kaillie Humphries considered defecting to the British bobsled team after she was benched by Canada at the 2006 Winter Olympics in Turin, Italy.
Good thing she didn’t.
On Wednesday night, the Calgary pilot and brakeman Heather Moyse of Summerside, P.E.I., led a Canadian charge at the Whistler Sliding Centre, winning the gold medal in women’s bobsled at the Vancouver Winter Games.
With a four-run combined time of three minutes 32.28 seconds, Humphries and Moyse edged Canadian teammates Helen Upperton of Calgary and Shelley-Ann Brown of Pickering, Ont., who captured the silver medal in 3:33.13.
Erin Pac and Elana Meyers, of the U.S., finished third in a time of 3:33:40.
“I don’t think I can put it into words yet,” Humphries said with a faraway look in her eyes. “We did our job, you know.’’
With a Maple Leaf tattooed to her left cheek, Humphries, 24, seemed dazed in her post-race news conference more than 30 minutes after she crossed the finish line.
“I know it’s happened,” she said, looking as if the exact opposite were true. “It just hasn’t quite sunk in yet.”
Canada might not own the podium at these Olympics, but they certainly rented the prime spots for Wednesday’s flower ceremony.
The bobsled performance marks the first time Canada has won multiple medals in a single Olympic event since Duff Gibson of Vaughn, Ont., won gold and Jeff Pain of Calgary captured silver in men’s skeleton at the Turin Games in 2006.
Considered an inexperienced pilot with just three years of driving experience, Humphries won the bobsled equivalent of the Indianapolis 500 with a learner’s permit.
And she did it with Moyse — a powerful fullback with the national rugby team — pushing the Canada-1 sled.
Moyse, 31, just happens to be the woman who bumped Humphries out of a job as a brakeman for Upperton in Turin.
Upperton and Moyse went on to finish fourth by an agonizing 5/100ths of a second.
All is forgotten now.
“Kaillie was saying it hasn’t quite set in yet,” Moyse said. “When it does, I’ll be bawling.”
“Five-100ths away from the podium is what made me come back to bobsledding. I guess I’ve got to be thankful for that five-100ths because a gold in my home country with Kaillie is better than a bronze would have been in Torino.”
The four Canadians linked arms in triumph and shared the glory of winning Olympic gold and silver on the same night.
“It feels like such a long four years,” Upperton said. “I’ve actually had more tough times in the sport than good times. But for some reason, you only remember the good times.
“The last Olympics, it wasn’t really a great memory. I was so intimidated by the whole experience.”
Not this time
“It can’t be better than this,” Upperton said. “This is the best. Doesn’t get any better. One-two at home.”
And to think Humphries figured she was done in terms of Team Canada after the 2006 Winter Olympics.
Her future husband, Dan, represented Britain as a brakeman in Turin. They wanted to be together and she wanted to compete at the Games. So she seriously considered moving across the pond and trading in the Maple Leaf for the Union Jack.
“It was the worst time,’’ she said. “To be at an Olympic Games and be so close and not be able to compete? That’s extremely hard. It was heartbreaking. It was devastating, and it definitely took me a very long time to recover.’’
She took the first step toward recovery a month after the closing ceremony by enrolling in bobsled driving school.
And amends were made last year when Humphries hooked up with Moyse in spite of the hurt feelings and acrimony of Turin.
“It was a weight off my shoulders,” Moyse said. “I didn’t realize how much guilt I was holding from four years ago, even though that’s all about the sport and everything.
“It’s good for me to be on the podium, but it’s an awesome feeling to know I helped Kaillie get to the top.”
Posted by jypsy at 7:49 AM 1 comment:

Freeze Your Gizzard 10K and Half Marathon