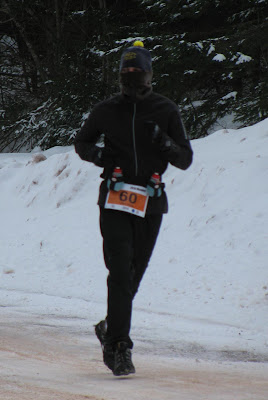 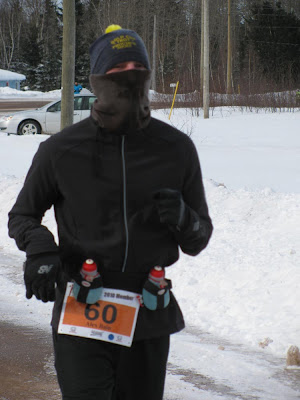 At 5Km and halfway point 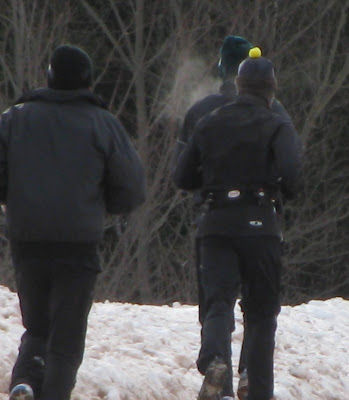 Mom can see my yellow pom-pom 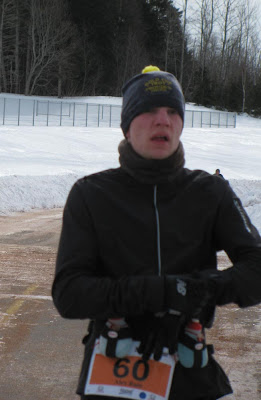 Billy MacDonald won the half marathon and Erin Poirier for top female. 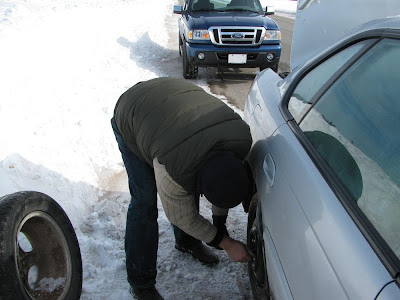 I had a flat tire on the way home, just past Poole's Corner. When jumping on the tire iron still failed to budge any of the wheel nuts, I called Debby's cell (I had gotten her number before I headed out on the course in case any of the runners had trouble. Little did I know it would be me calling that number later in the day, thinking maybe I could borrow her husband.....) As it turned out George answered and came to my rescue. By then I had done enough jumping on the tire iron to finally loosen the nuts and George had me back on the road in no time. Thank you so much George! - janet

Running For Autism
Not Against It
acceptance, inclusion, awareness
Posted by Alex Bain at 5:25 PM No comments:


This is what Alex's run home looked like the last two days. We've had winds gusting from 40-70Km/hr causing whiteouts and giving us wind warnings:

I took these pictures this morning around 9am, it didn't get any better by the time he ran home at 1pm.

Here's where his run home starts with the first (and worst) whiteout in sight: 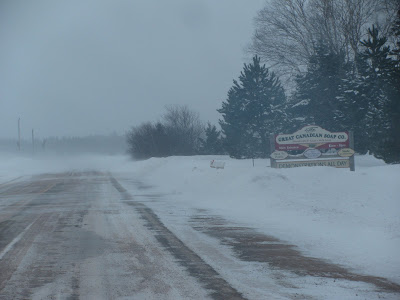 The approach to that first whiteout: 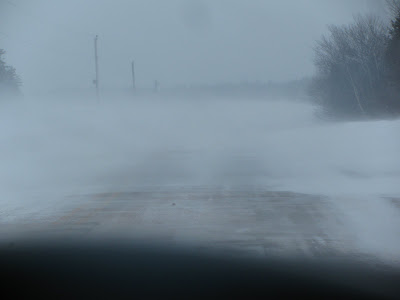 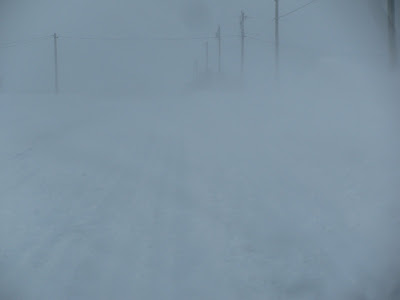 The Crooked Creek in sight, less than 1Km to go: 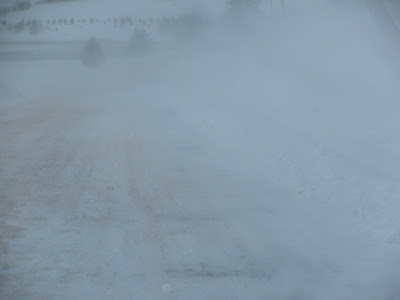 Home to the shelter of the yard: 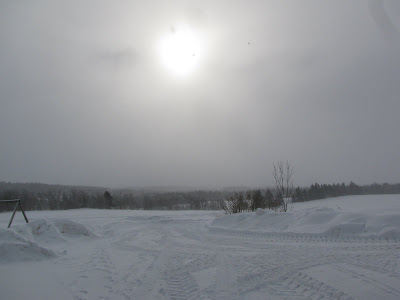 Looking at the Forecast

Friday: Periods of snow. Low minus 7. High plus 2.

it's a good thing the Freeze Your Gizzard is Sunday and not Saturday. Alex may freeze his gizzard in the colder temperatures but at least he might actually get there.

In 2005 we were getting snow and high winds and it took 45 minutes to get less than 4km from home, having driven through countless snowdrifts and under a downed power line. We realized even if we made it to Montague, a one hour trip on a good day, we'd never make it by race time. We turned around and came home (Alex was not impressed!) but 15 Half-Marathoners and 28 10K'ers braved the elements, got to Montague and ran the race (and by the looks of things likely froze their gizzards in the process!). 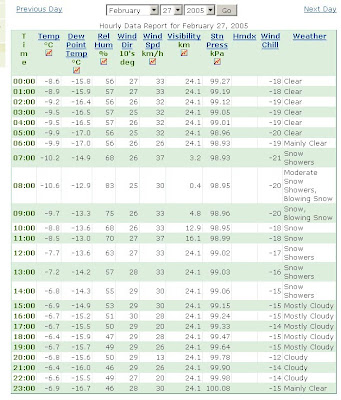 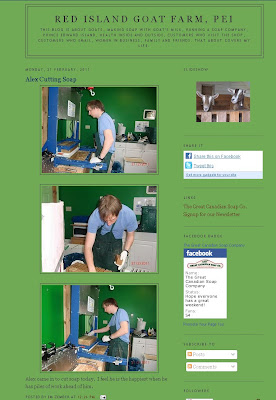 Today is Islander Day. I went to work to make up time I missed on Storm Days. I really like cutting soap with the air powered soap cutter. Em blog me today.
After work now I running home. It is 5km. 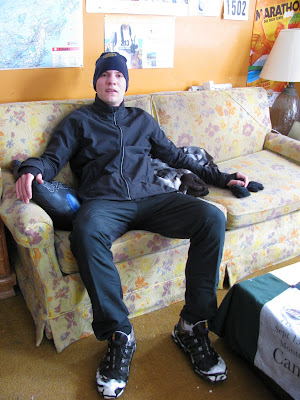 I buy a new Salomon running jacket and Sugoi pants from Sporting Intentions for winter running. I have YakTrax on my shoes.

The Freeze Your Gizzard Half Marathon Run is Sunday February 27.
Posted by Alex Bain at 3:18 PM No comments: 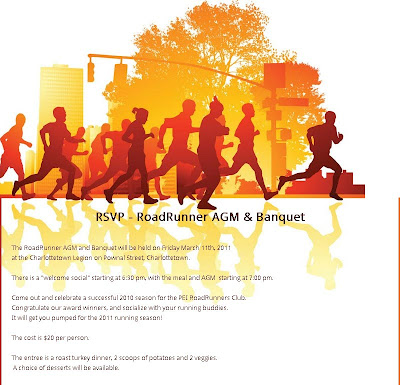 BOSTON – The Boston Athletic Association (B.A.A.) announced today a change in its registration process for the Boston Marathon, allowing the fastest qualifiers to enter the earliest and with a rolling admission system while also offering all eligible runners an increased registration period. The changes in registration are a response by the B.A.A. to greater than ever demand by runners to gain entry into the Boston Marathon and culminate more than three months of analysis, including input from the running industry. Rather than accepting runners who have met the qualifying standards on a first come, first served approach, a more systematic, performance-based process will be employed.

For the 2012 Boston Marathon, registration will extend for two weeks, beginning on Monday, September 12, 2011 and continuing until Friday, September 23, 2011. The qualifying times for the 2012 Boston Marathon will not change from recent past years since the standards had been previously announced and have been in effect since last September. However, the new registration process addresses the increased demand among qualified runners to participate in the Boston Marathon and will accommodate those who are the fastest qualifiers first.

If the field size is not reached after the first week and additional space remains, then registration will open to all qualifiers at the beginning of Week Two (September 19) and those who have met the qualifying standards by any amount of time will be able to apply for entry. The application process will remain open for the entire week, closing on September 23. At the conclusion of Week Two, those who are the fastest among the pool of applicants in their age and gender will be accepted. Accepted athletes will be notified on September 28.

If space remains available after this two week process, registration will remain open to any qualifier on a first come, first served basis until the maximum field size is reached.

The field size for the 2012 Boston Marathon will not represent a significant increase from the most recent years.

Registration Process for the 2012 Boston Marathon

If the field is not filled at the conclusion of the two weeks, then registration will remain open and qualifiers will be accepted on a first come, first served basis until the maximum field size is reached.

For the 2013 Boston Marathon, in addition to the new “rolling admission” process for registration which will be in effect for the 2012 Boston Marathon, the B.A.A. will adjust the qualifying times by lowering them by five minutes from the times which have been in effect in recent past years. The adjusted qualifying times will go into effect on September 24, 2011, and are as follows:

“As the number of qualified runners has increased combined with greater demand to run the Boston Marathon, our new registration process enables those who qualify by the greatest amount of time to have the longest period to enter,” said Tom Grilk, B.A.A. Executive Director. “Our new registration process takes into consideration the many comments we received from runners this past fall and winter, most of whom urged the B.A.A. to institute a system which recognizes athletic performance above all else.”

The 2011 Boston Marathon reached its maximum field size of qualifiers faster than any previous year when qualifiers rushed to fill the race and the qualified field closed in eight hours, three minutes.

"People born in the year of the rabbit are the luckiest among "the twelve animals." The rabbit is a symbol for mercy, elegance, amiability and worship of beauty. People born in this year are kind, speak gently, peaceful, quiet and loving persons. They like to live easy lives. They are reserved persons, love arts and have a strong sense of justice. Whatever they do, they will start well and end well..."
http://www.chinavoc.com/zodiac/rabbit/person.asp