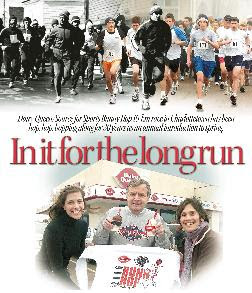 LIFESTYLES
Last updated at 12:39 AM on 31/03/07
In it for the long run
Dairy Queen/Source for Sports Bunny Hop 10 K race in Charlottetown has been hop, hop, bopping along for 30 years as an annual introduction to spring.


Some see signs of spring in the arrival of daffodils, the return of robins or the first green blade of grass.

But chances are if you're a runner in this province, the first true symbol that winter has finally been kicked to the back of the boot closet is when the annual Dairy Queen/Source for Sports Bunny Hop run comes hop, hop, bopping along.

For the past 30 years, this P.E.I. Road Runners Club 10-km race in Charlottetown on Easter Saturday has been a sneaker-donning staple for runners of all ages.

“This is a real rite of spring, you know?” says Tara Costello-Ledwell, volunteer co-race director for the 2007 bunny hop, which gets underway at the Dairy Queen on University Avenue at 10 a.m. on April 7.

“It’s always a really great feeling the morning of the race, ‘OK, spring is here!’ ”

“It’s an Easter tradition in Charlottetown in the running community, for sure,” adds fellow co-race director Ellen Sherren, who expects this year’s race turnout will top 200 for this fund- and awareness-raising project for the Kidney Foundation of P.E.I.

The idea of forming a road- running club on P.E.I. originated during a Moncton to Charlottetown run in June 1977, says Parker Lund of Dartmouth, N.S. who was on this fundraising run.

The chit-chat that ensued during the multi-day run prompted talk of forming a running club, the main purpose of which would be to promote fitness and participation through jogging and running. The club’s first meeting was on Sept. 27, 1977.

The running community was still in its infancy on P.E.I. at the time.

“You were almost a freak if you were a runner, there were so few,” jokes Lund, who was the club’s first president.

It was the tight-knit community that provided the incentive to get out and run.

“I think one of the things that was good about it is we ran every day,” remembers avid runner Ewen Stewart.

“And on a dirty day, everybody would get out because they’d say, ‘Oh so and so is out so I’d better get out and keep him company.’ ”

The first projects undertaken by the club were fun runs, social runs and a newsletter. One of the runs was a loosely formatted Dairy Queen-sponsored race in 1977. For that race, runners followed a plotted six-and-a-half mile course that was changed in later years to avoid traffic issues.

“We all knew each other. Some of the faster guys were real fast and some of us were real slow, but at the end we all just had fun,” says Al Stewart, manager of the Charlottetown Dairy Queen for 40 years who was also a runner at the time.

“Every year we got more runners so it didn’t take long to catch on.”

Stewart says no records were kept from the inaugural run in 1977, but the first formal trophy run for the bunny hop was in 1978. It attracted 32 male entrants in four age categories. The winner that year was Gary Andrus.

The first female bunny hop winner was Sherry McKenna in 1979.

When Pam Power McKenna returned from Alberta in the mid-1980s, the bunny hop was one of the first ready-set-go stops on the list for this avid runner.

“Even in the ’80s, we had very few women runners, like there’d be five of us maybe in many of the runs, and then when it got to 10 that was big,” she remembers. “And now we get more women than men. Percentage wise it’s probably about 51 per cent. So it’s really getting big.”

Power McKenna’s first bunny hop win in her division was in 1989. She went on to place first seven more times, the most recent of which was in 2003, putting her in the bunny hop record books as the most prolific winner.

“(The bunny hop) is the first of the year, it gets you motivated for the summer and it’s become a lot of fun and a community thing. (It’s) something to talk about; ‘are you going to the bunny hop?” ­ that sort of thing,” she says.

Of the P.E.I. Road Runners Club’s offering of almost 30 races, the bunny hop is probably the most popular.

“It is certainly the largest,” says Sherren. “And it’s a 10-km distance, which is the most popular distance in the race listing, and it’s the first competitive race of the season . . . . And a lot of people have been training all winter, they want to get outside.”

The excitement of bunny hop race day is difficult to describe, Costello-Ledwell says.

“I really think that these kind of community runs and community events are a great way to promote the active living side of things,” she adds.

“It’s wonderful to see people coming together and the camaraderie. There’s a lot of fun and people seem to really enjoy the race. Thirty years is a long time.”

The weather was Cloudly, furries, windy and cold. -3 degrees windchill of -10 degrees. Alex Coffin come from Saint John, NB and won the race. He only wearing shorts.
He brought information about his races. See www.alexroadraces.com. He said 84 runners from NB are going to Boston Marathon. 18 runners from PEI are going to Boston Marathon.
I wore yellow shoes for normal feet and my jacket to keep warm. I had great race faster than last year by six minutes. Single loop around Bedeque without water. Not too many runners because of cold. The north wind pushes south.


Running For Autism
Not Against It
acceptance not cure
Posted by Alex Bain at 1:27 PM No comments:

This post has nothing to do with running but there is an Alex connection. I think this blog is a good place to allow for these little "detours" from the running path and so in future, if we post any such unrelated things, they'll be marked as such.

Actually there is a bit of a running connection here - I've commented to a few of his fellow runners lately that lately Alex has turned into a "weekend warrior" with his only weekday running being his morning 400 yard run down to the road to get the newspaper from the mailbox and back again as he likes to start his day by reading The Guardian. I've even threatened to let the subscription go when it expires so he'll have to run to the corner store every morning, a 4Km round trip, to get the paper. That would surely inspire him to train regularly like he used to.

Anyway.... the first night at Run UPEI, the first thing he did, upon walking in the door, was to grab a copy of the UPEI newspaper, The Cadre. I read it as he ran, we brought it home where he read it later. The latest issue has an article that caught my eye and, as always happens when I see or hear her name, made me smile - "Ashley Clark's Year to Remember".

Ashley Clark is having a year to remember but she is very much a part of "Alex Bain's Year to Remember". Ashley is the girl who, in Grade 1, taught (inspired?) Alex to talk. Ashley is the girl who befriended him (along with many others), played with him, hung out with him, helped him..... They were Mary & Joseph in the Christmas concert and had a close relationship in the classroom & school yard too. In February of Grade 1, Alex began to talk for her. (I have some really cool VHS video tucked away taken a day or 2 later that shows how it all came about, someday I hope to get it copied to DVD.) Once he began to talk for Ashley, to repeat anything she said, he talked for all of us, repeating anything any of us said and reading aloud everything that, until then, he'd been reading to himself.

Anyone who knows Alex today knows he has difficulty with articulation and knows he can be hard to understand sometimes. But, Ashley and Alex's classmates up until that February day, knew Alex as the kid who couldn't talk. I didn't think Alex was ever going to talk quite frankly. Although we worked on speech and he'd been in speech therapy since he was 2, his inability to speak wasn't a big concern for me, my focus was more on communication than speech. A report from his Speech Language Pathologist at the time states "With the consistent and enthusiastic support of Alex's teacher assistant and parents, Alex entered Grade 1 at Gulf Shore in September 1993, with the ability to use all of the following means of communication -- sign language, gestures, Canon Communicator, picture communication symbols, infrequent vocalizations and an immerging ability to print words".

Ashley moved away at the end of Grade 1 and did not return to PEI until they were in High School. I didn't see her again until the night of the athletic banquet in Grade 12 when she gave the blessing (and Alex won the Boys X-Country Award of Distinction ).

Thank you again Ashley. I have no doubt that you not only taught but learned from Alex. What you may not know is how many professionals learned a very important lesson from a very little girl about teaching and educating autistic children. As you continue on your travels around the world, we wish you all the very best.

I'll end with this piece from Alex I found recently. It's an English assignment he did in High School, in relation to Tony O'Brien's article "My search for the friend I left behind" about O'Brien's return to Afghanistan after having been imprisoned there in 1989. 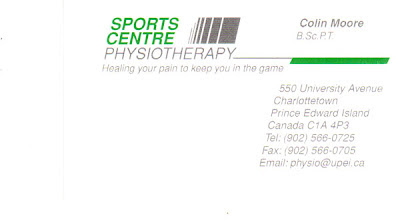 Colin Moore gave a presentation on choosing the proper shoe. There three kinds of feet.
He look feet and I have a normal feet.

Running For Autism
Not Against It
acceptance not cure
Posted by Alex Bain at 8:32 AM No comments: 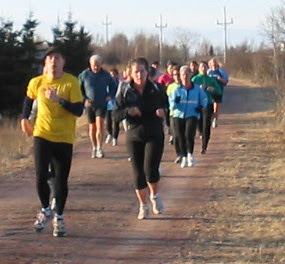 I joined Run UPEI last Tuesday. Run UPEI is a running group with Stanley Chaisson at the University of Prince Edward Island. 11 weeks, 21 sessions of running and learning and have fun. I joined to keep fit, running the fast pace. My goals are get better times than last year, train more, have fun. We run on the indoor track and on the trail behind UPEI. Mostly new people but some roadrunners I know and I know Stan. (posted by Alex)

Stan's Run UPEI Intermediate Group between out & backs on the trail
Running For Autism
Not Against It
acceptance not cure
Posted by jypsy at 8:35 AM 3 comments: 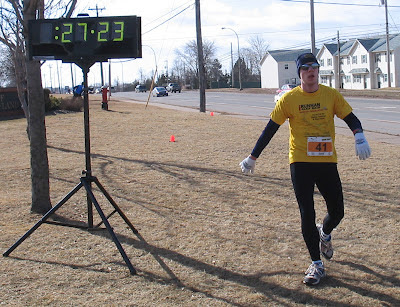 Running For Autism
Not Against It
acceptance not cure
Posted by jypsy at 4:11 PM No comments: 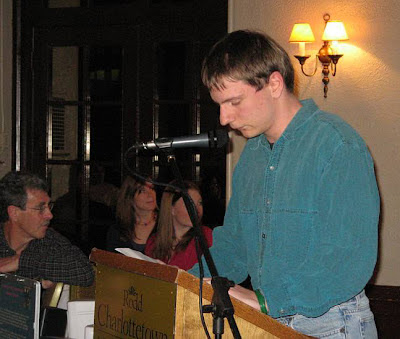 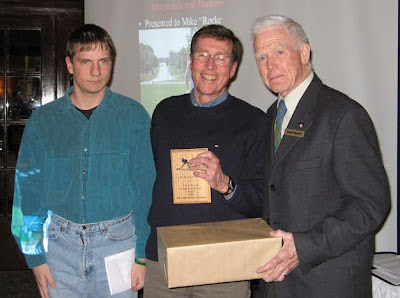 Running For Autism
Not Against It
acceptance not cure
Posted by jypsy at 3:27 PM No comments: 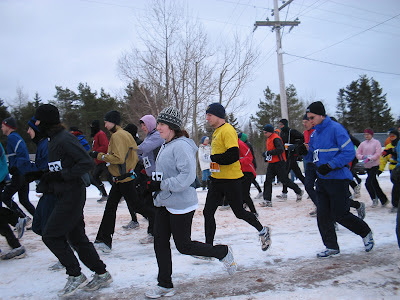 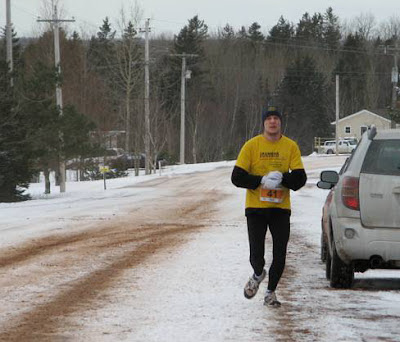 Running For Autism
Not Against It
acceptance not cure
Posted by jypsy at 2:51 PM No comments: 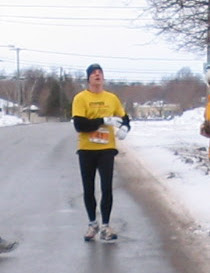 Running For Autism
Not Against It
acceptance not cure
Posted by jypsy at 2:32 PM No comments: