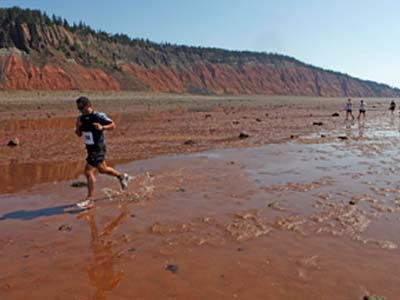 By Erin Sheard
In the September 2011 issue of iRun magazine, Tim Irvin wrote Surging Growth about the increasing popularity of running. He notes that there are now approximately 2,500 running events held across Canada each year. We are lucky to be running in a decade when a race can be run nearly anytime we want, but the choice can be a little daunting. Ultimately it comes down to the features you want in a race, but of the 2,500 possibilities here are 15 races you may have never heard of that offer something unique for the discerning runner.

Can you imagine running on the bottom of the magnificent Bay of Fundy while the world record tides are out? The Not Since Moses 5K and 10K in Five Islands, NS takes you out onto the exposed seabed next to the breathtaking cliffs that are normally only visible by boat. You will get wet, you will get muddy, but will you beat the tides back to shore?

Fitness enthusiasts flock to the glorious Great Lakes – the largest freshwater system in the world – every summer to engage in any number of water-themed activities. For 60 years a small race in Wiarton, Ontario, has embraced the province’s waters. The 13K Shore to Shore race takes runners from the beaches of Lake Huron, an area famous for its spectacular sunsets, along a sleepy country road, until steeply dipping down the rugged cliffs of the Niagara Escarpment to the waiting shores of the storied Georgian Bay.

Billed as “the toughest race in eastern North America” the Cape to Cabot 20K in St. John’s, NL, promises this race will be one of your most memorable athletic achievements. A race starting in the oldest city in North America lives up to its claim to fame with a route that runs from Cape Spear National Historic Site, passes along the historic St. John’s waterfront, and ends with a mile long climb up Signal Hill to Cabot Tower. Only 3K of this gruelling course is flat; hardy runners tackle a hilly course with four major climbs with grades greater than 10%. The reward is spectacular scenery and bragging rights!

The Oktoberfest Brewskidaddle 5K in Vancouver, BC, adds a bit of running to the sauerkraut, beer and polka mix. Beer mugs are provided with every entry and the real test of endurance begins with the post-race party. There is no shortage of prizes featuring not only individual, stroller, family, team and kid divisions, but a unique “beer belly” divisions for men over 210 pounds and women over 160 pounds (although it’s not clear if that includes the weight of your lederhosen).

Trail running may be the fastest growing type of running race in Canada, but many runners are nervous about moving from the comfort of the road to the unknown terrain of the trail. The Winnipeg, MB,Try a Trail series encourages nervous first-timers to run their first trail race on less technical 3-metre wide mixed use trails with grass, gravel, and sandy terrain – plus a mucky bog and a few surprise hills to add challenge. You won’t get lost in the wildness as there are lots of directional signs, kilometre markers, flagging barriers and a pre-race briefing to keep you on course.

Rarely does a runner have the opportunity to cross two provinces off their cross-Canada checklist by running one race. The 10K Cross-Border Challenge start line is in Aulac, NB, and the finish line is in Amherst, NS, the geographic centre of the Maritimes. The route takes runners across the world famous Tantramar Marsh, the place where land and tide meet in a national wildlife area joinng Nova Scotia to New Brunswick and mainland Canada.

On or near the longest day of the year the Midnight Sun Fun Run 5K, 10K and Half-Marathon is held in Inuvik, Northwest Territories. Within the Arctic Circle, Inuvik is the end of the line, literally, as the most northerly town accessible by public road in North America. With approximately 56 days of continuous sunlight in the summer, runners are drawn in by the unparalleled experience of running beneath the midnight summer solstice sun.

For a Canadian runner, a Canada Day Race is a must do, but with the humidex high and the BBQ calling, a July 1st run can quickly become something to do “next year.” The Canada Day Moose Jawg Charity Road Race in Moose Jaw, SK’s beautiful Wakamow Valley is more than just an awesome race name on a t-shirt. Word is out and this little race keeps growing every year. The temperate July 1st temperatures are not only PB-perfect in mid-summer, but ideal for visiting a quintessential Canadian city.

Snowshoe running is still a fringe sport in most of Canada, but Quebecers have been embracing the sport for years. The Atlas Mad Trapper 5K and 10K Snowshoe Series takes advantage of the early December snow with a flat season opener to warm up the legs. Later in the season the more challenging “up, up, up, and finally down course” runs the best of the hilly, rugged, single-track Gatineau Hills wilderness. Cool down from your tough workout beside a roaring bonfire.

The Earth Day Climb and Run for Wilderness in Calgary, AB tests a runner’s speed and strength. The race begins with a 1K dash around the base of the Calgary Tower followed by a 160 vertical-metre sprint up 802 stairs to the finish line at the top of the tower. Suddenly some of those other race course hills won’t seem so steep.

Sometimes it seems like the only people who win a race prize finish 1, 2 or 3. In the Great Canadian Goat Run 5K & 10K road race in Brackley Beach, PE special prizes go to the Oldest Goat, to the runners who return with a rubber chicken caught on the course, and gift certificates are presented to anyone running their very first race or a personal best time. Every runner receives a T-Shirt with a special Goat Haiku written by the Company Goats and, of course, there is lots of ‘kidding’ around.

The Totem to Totem Marathon (with half marathon and 10K options) held annually in Haida Gwaii, BC ("Islands of the People", formerly the Queen Charlotte Islands) is the most westerly place in Canada you can go. The certified and simple out and back course starts and ends in front of the six totems representing six of the southern villages of the Haida people. You begin your race along the scenic shoreline of the Haida lands with majestic eagles soaring overhead, but the best is yet to come.

The annual 5K River Valley Rave Run in Grand Bay-Westfield, NB is touted as the fastest 5K course in New Brunswick. Indeed, this “flat, fast and furious” race is so quick that the race director promises a personal best or your money back (note: some restrictions apply)! The Rave Run is also host to the provincial championships, so regular runners can rub shoulders with the fastest in the province.
The Polar Bear Marathon in Churchill, MB is organized by extreme runner Albert Martens and is limited to just twenty runners who will stay together for the duration of the run in a tight pack in case of the very real possibility of running into polar bears. Support vehicles will accompany you on this epic adventure in Canada’s Polar Bear capital.
To be determined
This list wouldn’t be complete without mention of the Canadian Death Race in AB. This killer challenge is not for the running masses. But for the few fit brave souls daring enough to test their strength, against the Canadian Rocky Mountains, this race offers all for the glory of finishing one of the world’s toughest and most unique adventure races.
Posted by jypsy at 7:32 PM No comments:

Jennie Orr’s determination and the encouragement of a friend helped her finish her first marathon.

“The first half was, I wouldn’t say easy, but comfortable,” she explained. “The second half was really hard. It got warmer and I got to the point where I was just like ‘are we done yet?’ ”

The 20-year-old Mayfield resident credits Michael Gaudet with helping her reach the finish line in Halifax during the Bluenose Marathon in May.

Gaudet encouraged her to keep going during the last five kilometres.

“If it hadn’t been for him, I think I’d still be sitting there at the water station,” she said with a laugh Tuesday.

Marathon-Photos.com
Islander Jennie Orr, right, credits Michael Gaudet, left, for helping her complete her first marathon. The two ran the Bluenose Marathon together in Halifax in May.


It is that kind of camaraderie that draws many people to the sport.

And it was her clubmate’s encouragement that gave Orr, who been running seriously for about eight months, the reassurance to enter the 42.195-kilometre race.

Her previous longest run was 39 kilometres.

“I run with the P.E.I. RoadRunners here in town and they kind of convinced me I was ready to run a full marathon,” Orr said. “They were all there to support me, so that was nice.”

She didn’t believe organizers when they told her she was the second woman to finish the race in three hours, 34 minutes. 44.6 seconds.

She won her category (females between the ages of 20 and 29) and was the 32nd person to complete the race.

Orr was proud of her accomplishment and is already looking ahead to her next big run, the P.E.I. Marathon, in October.

Her advice to others considering running a marathon: “It’s all about determination.

“Honestly, if you set your mind that you’re going to do this, you can.”
Posted by jypsy at 7:25 PM No comments:

Alex Coffin from Saint John won the race and Melanie McKenna for the top female. I finished in 18:31 and came in 7th out of 246 runners.

Running For Autism
Not Against It
acceptance, inclusion, awareness
Posted by Alex Bain at 7:40 PM No comments:

The College of Piping Run to Scotland 2012

It was sun and few clouds and 13 degrees.

Evan Rogers won the 5km race and Carolyn Rome-Turner for the top female.

Running For Autism
Not Against It
acceptance, inclusion, awareness
Posted by Alex Bain at 7:33 PM No comments:

The PEI Parks Trail Run in Milton. The out and back course on Confederation Trail.

Scott Clark won the race and Jennie Orr for the top female. I finished in 40:23 and came in 5th out of 72 runners.

Running For Autism
Not Against It
acceptance, inclusion, awareness
Posted by Alex Bain at 7:25 PM No comments: