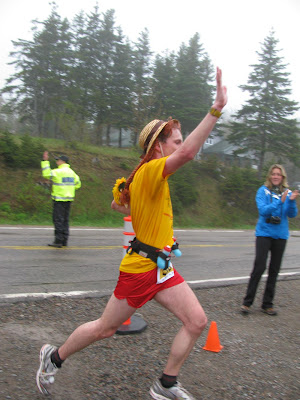 #2.
My Mom Female RoadRunner of the Year 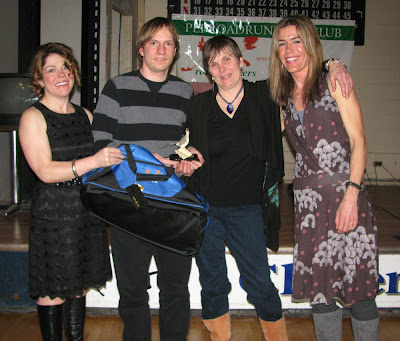 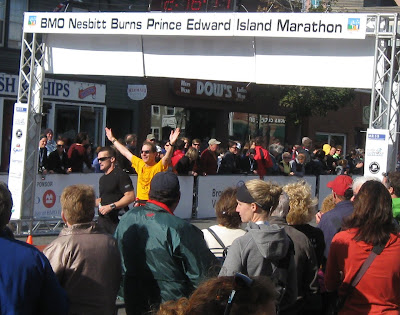 STRATFORD - A new waterfront road will bear the name Michael Thomas Way in honour of the famous Stratford resident.

The new road has been constructed as part of the waterfront development now underway just south of the Hillsborough bridge approaches.

The Great Michael Thomas, as some Halifax newspapers at the turn of the last century called him, had an international reputation for long distance running. He was born on Lennox Island in 1885 but set up a fishing business in what was then called Southport.

Thomas first came to prominence when he won the Charlottetown Patriot newspaper's 10mile race in 1909. Thomas would go on to win the same race three years in a row plus other races in the Maritimes.

He became known as the Island Longboat, a name derived from a world- famous long distance runner at the time, Tom Longboat.

Thomas was the first Islander to run in the Boston Marathon, placing 26. He was inducted posthumously into the PEI Sports Hall of Fame in 1980.

In the late 1920s Thomas moved his family to Southport to give them better opportunities.

"His family home was situated near the water at the approach to the Hillsborough Bridge," said Stratford councillor Diane Griffin as she recently presented the street naming resolution to town council.

"He lived in what was then Southport and remained a champion of aboriginal rights," said Griffin. "He retained the respect of the community for his accomplishment and convictions."

iRunNation, we challenged you to tell us why your Running Group was the best in the country and we promised to share our favourite stories. Congratulations to The Island Girls, our number 1 Running Group.

What started as a 10-week learn to run 5K program in Kensington, P.E.I. quickly became The Island Girls Running Group, thanks to Lynn Anne Hogan and Ronda Bellefontaine who began sharing their new love of running with members of their community in 2007. The Island Girls trained and ran in many PEI Roadrunner 5K and 10K events but it was during a trip to Halifax, NS to run the 10K at the Bluenose Marathon in 2009 that the girls decided to set a new goal: to run the half marathon during the 2009 PEI Marathon weekend.

“I could not have achieved my running success without the support of the Island Girls. I never considered myself athletic, so the feeling I had when I crossed the finish line at the half marathon was really indescribable. If it wasn’t for this group, I would not be running today. I joined the program to get some exercise but I have found a group of fun, supportive, encouraging women,” says Shelly Saulier who has completed numerous 5K, 10K and half marathon events.

It’s an amazing feeling when you realize that you’ve layed a part in helping others lead a more active and healthy life. In 2010-2011, we not only added five new members to our Club but we have also seen an increase in the number of husbands taking up the sport. We all love inspiring people to start running by telling them that we started by walking three minutes and running 30 seconds, and that they can too. Not only has the group been learning to run together for almost four years, we have also organized and delivered the Halloween Hustle 5K Fun Run held each year in Kensington for the past four years, an event that raises funds for local charities and attracts many new runners and walkers, including many families.

2010-11 was a very busy year for the Island Girls. Many secured PBs in 5K and 10K Roadrunner events. Others completed their first half marathon and four Island Girls completed their first full marathons right here in PEI. We are very proud of our accomplishments. Four years ago we would never have thought that we could run more than 5K and look at us now. We enjoy supporting not only each other but also other new runners that we meet during the many PEI Roadrunner events that we participate in. This is exactly the outcome that Lynn Anne and Ronda were hoping for when they brought their love of running to the town of Kensington.

Biathlon and bagpipe world titles in sight for teen

Biathlon and bagpipe world titles in sight for teen

'I like to win,' says Carsen Campbell of P.E.I.

A 17-year-old from P.E.I. is on his way to two world championships this year: a youth biathlon competition later this month, and a piping event in August.

Carsen Campbell of Bedeque, east of Summerside, earned a spot on Canada's young biathlon team last weekend in Quebec. That would make a successful year for any 17-year-old, but in addition to travelling to Kontiolahti, Finland, for the world youth biathlon, Campbell is going to Glasgow for the world piping championship. He is a part the band that is the reigning North American champion.

Firing a gun over a cross country ski course and playing bagpipes may seem like entirely different activities, but Campbell sees some similarities.

"You have to keep relaxed and calm and in control."

Carsen Campbell will compete in biathlon in Finland later this month. (CBC)

Campbell's proud parents say some credit for Carsen's big year can go to the fact he's home schooled, which gives him more time to train. But they say the main ingredient is sheer determination.

"He trains three or four hours a day for his biathlon, and he plays the pipes constantly," said Robert Campbell.

"Carsen's always been a highly motivated kid. Ever since he was little he's been very tenacious. Whatever he set his mind to he'd just go after and wouldn't let go of. It seems to be paying off for him now."

Carsen Campbell said the turn of events that has him going to two world championship in one year seems as strange to him as it does to anyone else.

"I don't really know how that happened. It's rather strange, but it's just the way it worked out," he said.

"I'm very competitive. I like to win. I like to beat the guys from the provinces with 10 million people."

After attending two world championships in a year at age 17, Campbell said about the only thing that could top this year is an appearance at the Olympics: either competing for a medal, or piping in the athletes at a medal ceremony. 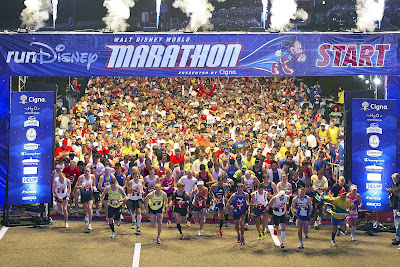 The Walt Disney World Marathon in Lake Buena Vista, Florida. The course on Epcot, Magic Kingdom, Animal Kingdom and Hollywood Studios. The 10 days vacation begins with my mom and PEI Roadrunners on January 5. We arrived Orlando for the first time. I spend a week in Disney's Pop Century Resorts, resignation at Disney Marathon Expo in ESPN World Wide of Sports and I rode rollercoasters and attractions. I run the first corral at 5:35am of 7 corrals. Fredison Costa from Brazil won the full marathon and Renne High from Virginia Beach, Virginia for the top female. It was sunny and 17 degrees. I run 4 Disney Parks with meet Disney characters and attractions on park areas. I finished the full marathonin 3:40:21 and came in 875th out of 13,500+ runners. It was the first run on American soil and I made in top 1000 runners. The last two days at Universal Studios Florida and returning home on January 14. Thank You to all runners, volunteers and followers to supports me at Walt Disney World Marathon! 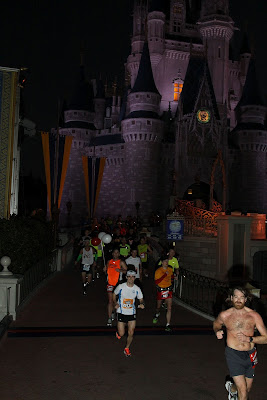 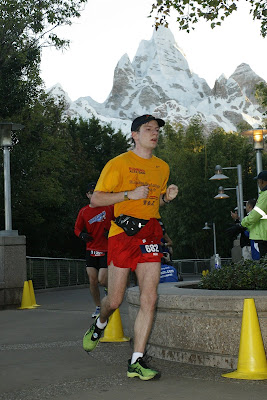 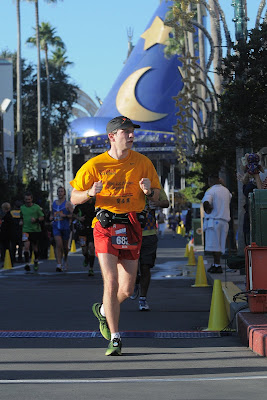 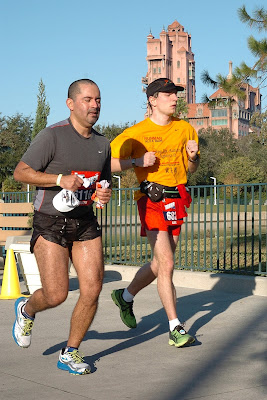 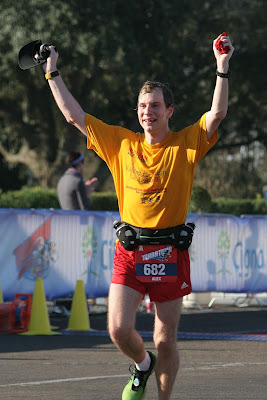 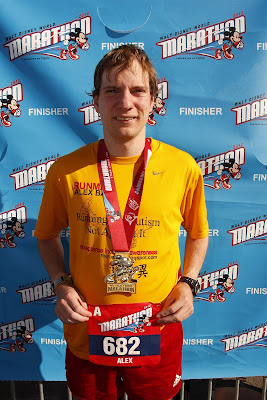 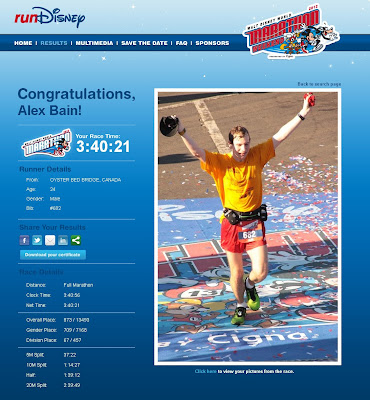