It was sunny and 7 degrees.

Connor McGuire won the 10Km race and Rebecca Pike for the top female.

Rick Lehman won the 5Km race and Hannah Walker for the top female. 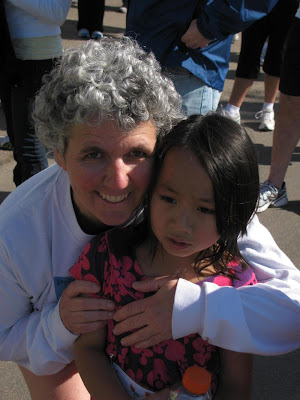 A hill by any other name is still a hill

There is a hill just west of the Queens Arms corner on the Trans Canada Highway in Charlottetown that has been the near downfall of many runners over the years. It was known simply as the Wandlyn Hill to runners as far back as the 1970s when an motel of the same name was located part way up the hill. That motel is gone, but to many runners of a certain age the hill is still the Wandlyn Hill and Saturday during the Source for Sports Spring Bunny Hop the hill once again played havoc with some runners. The event, with is the unofficial start of the spring road run season, attracted more than 200 runners for the 10 kilometre and five kilometre run.

~*~
Running For Autism
Not Against It
acceptance, inclusion, awareness
Posted by jypsy at 12:54 PM