Islanders on the Run - The Fredericton Marathon


Congrats All!
Posted by jypsy at 1:24 PM No comments:

It was cloud and windy and 9 degrees.

Stanley Chaisson won the 10km race and Jocelyn Peterson for the top female. I finished in 46:16 and came in 4th out of 12 runners.

Chad Lewis won the 5km race and Sophie Peterson for the top female.

By Luke Arbuckle
luke@peicanada.com
Despite wind and rain, over 50 participants showed up to participate in the 2014 Morell Fun Run on Saturday morning.
The race was divided into three parts, a 1k walk, a 5k run, and a 10k run. Proceeds from the event are being donated to wards the traveling costs for a grade 10 Morell High School student who was diagnosed with Granulomatosis with Polyangiitis, a rare disease that causes blood vessels and other tissue to become inflames, limiting blood flow to the body.
Organizer Tyler Read worked with the school’s leadership class and the PEI Roadrunner’s Association to make the event a success.
“This is our first year doing this race, but I hope it will become an annual event,” Mr Read said.
“We’ve got a great turnout, no one should get overheated while running and it’s all for a great cause.”
Number 75, 44-year-old Chad Lewis of Marshfield was the first 5k racer to cross the finish line with a time of 21:28. He said it was the first race he’s done in two years, but was happy with his performance.
Number 801, 17-year-old Mackenzie Turnbull of Elgin, Ontario was the next across the line with a time of 21:53.
Number 803, 16-year-old Ian Sly of Elgin, Ontario place third with a time of 23:09. Both Mr Turnbull and Mr Sly are exchange students from Ontario currently attending Morell High.
Number 279, 10-year-old Sophie Peterson of Charlottetown was the first female to complete the 5k event with a time of 23:51.
In the 10k race, number 802, 31-year-old Stanley Chaisson of Bear River took first place with a time of 35:31.
Number 837, 23-year-old Mitchell Visser of Orwell placed second with a time of 42:04.
Number 13, 55-year-old Gary Simmonds of Morell finished third with a time of 42:27.
Number 281, 36-year-old Jocelyn Peters of Charlottetown was the first female to complete the 10k run with a time of 52:16. Her 9 month old daughter Alice completed the race with her mother and never even needed to open her eyes.
A breakfast and gathering was held at the school once the race had finished. Participants were treated to door prizes and all the liquid they could drink.
See attached video to watch some of the runners


Running For Autism
Not Against It
acceptance, inclusion, awareness
Posted by jypsy at 6:02 PM No comments:

It was sun and 9 degrees.

The Proudes`s Shoes 5K at Sherwood. It was 10 years since join the club for the first run. The course on Ellis Rd, Maple Ave, Ash Dr, Gamwell Ave and Conamore Dr.

Kris Taylor won the race and Natalie Dallaire for the top female. I finished in 20:17 and came in 16th out of 83 runners.


After the race we headed to Hashem's to exchange the shoes
Alex won at the Banquet for winning the Points Championship with Scott Clark
Mr. Hashem went right for these guys! Nice fit...
-j 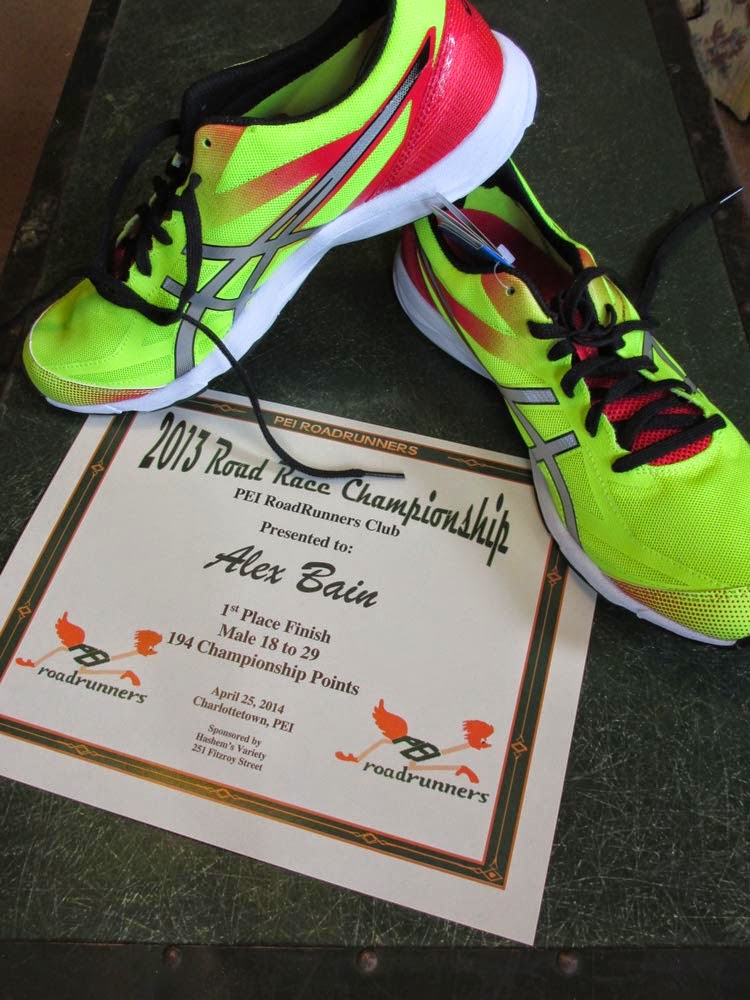 It was sun and cloud and 4 degrees.

Gaetan Dallaire won the 10km race and Jolene Willis for the top female. I finished in 42:30 and came in 8th out of 33 runners.

Rob MacKenzie won the 5km race and Natalie Dallaire for the top female.

Running For Autism
Not Against It
acceptance, inclusion, awareness
Posted by jypsy at 9:23 AM No comments: