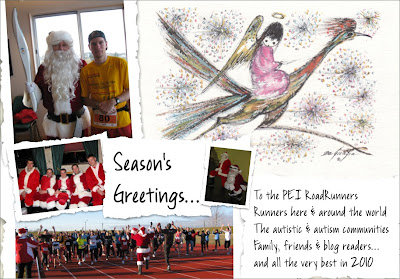 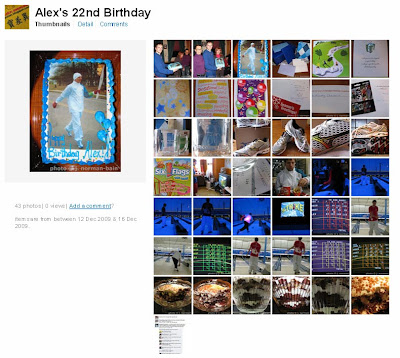 I turned 22 on Tuesday. Dianne and Elaine get me a cake at the Roadrunner Party. They give me a gift card from Source For Sports and Rose give me a year of Canadian Running magazine.

On the birthday I got a Wii game, new shoes, Olympic mug and $250.
Tuesday night I went Wendys for supper, running group and bowling and then Death By Chocolate cake.

Thank You for the gifts and all the "happy birthday" on Facebook and the TDISC blog. 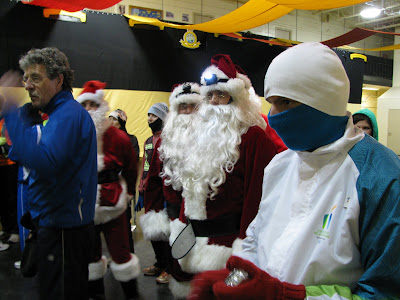 The Road Runner Christmas Party and 5km run at Queen Charlotte Armories. The biggest turn out ever for the Christmas party and join by Tdisc 5 Santas raising money for Charlottetown families for Christmas. It was cold and windy and -9 degrees and wind chill of -20 degrees. The figure 8 course on Victoria Park and Old Charlottetown with Christmas lights along the way and back to the Armories for chili, and snacks. 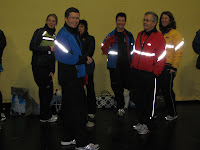 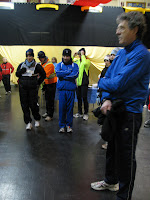 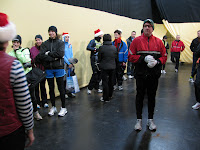 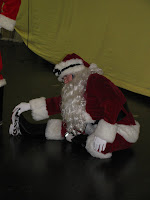 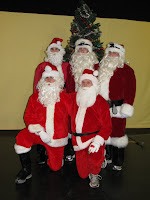 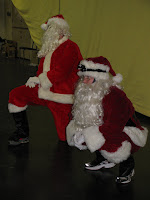 "On December 12, all five members of Tdisc will participate in the
“Ole Charlottetown 5k Christmas Run.”
Each member will be dressed in a full Santa Claus costume (beard and all).
In doing this, Tdisc will seek pledges/ donations that will go towards gift packages for local families. All of the proceeds raised will go towards these gift packages."
http://bloggingwithtdisc.blogspot.com/ 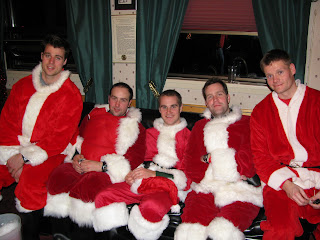 Dianne and Elaine surprises me with a birthday cake with my torch picture. 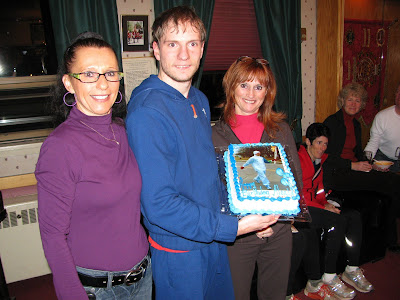 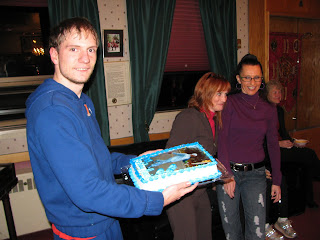 Thank You for the cake and the presents
Dianne, Elaine and Rose! 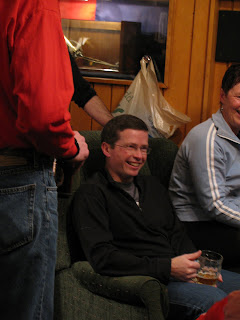 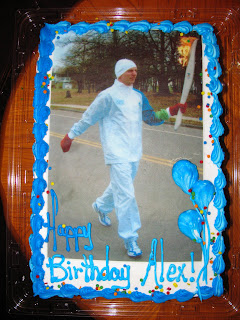 My birthday on Tuesday I'll be 22 years old.

I had a very good year!

Running For Autism
Not Against It
acceptance, inclusion, awareness
Posted by Alex Bain at 10:14 PM 2 comments:

Our deepest sympathies go out to
James Delorey's family, friends and community 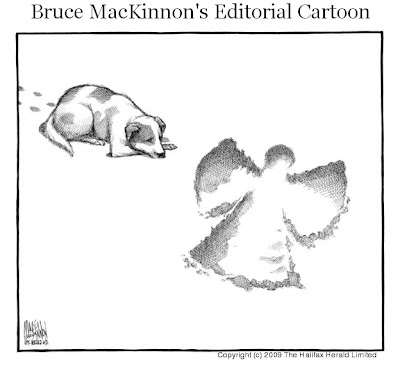 CBC contacted me the morning of December 8th, after James had been found in thick brush and snow, two days and nights after following his dog Chance into the woods near his home in Cape Breton. James had been airlifted to the IWK Children's Hospital in Halifax in critical condition suffering from extreme hypothermia. They wanted to do a story on "the challenges or strategies that could be involved in searching for a lost person with autism" and because Alex and I had given a training session to PEI's Ground Search and Rescue volunteers in January, they hoped I could provide that information.

Moments before the interview began, Kerry Campbell got a call informing him that James had died. He relayed that information to me. As soon as he left I sent him the following email, part of which he shares in the TV News interview.

Just so you know..... I could acknowledge the news of James' death or do that interview but not both. I wish I could have expressed my sympathies at the time but then you wouldn't have your interview.

It's good that parents of Island autistics will know that PEI's Search & Rescue members have autism specific training. Especially now. Thank you Phil for inviting me. Thank you Dennis for supporting & advising me and for sending me your yet-to-be-released First Responder video to show, and getting it here, just in the nick of time. Thank you Brian for your moral support and wise contributions. Thanks too to the SAR guys who took care of the technical end of things for me today. And to all the volunteers who make up PEI's Search and Rescue - thank you for today's great discussion and your kind words of feedback afterwards. Thanks especially for the work that you do and the work that you are prepaired to do. I hope you learned some valuable things today but I also hope you'll never have to put any of that knowledge to use in a rescue and/or emergency situation.

Thank you for helping us make PEI a better, safer, place for all autistics.

Since it will be dark when we run,
a flashlight/glowstick & plenty of reflective clothing
are suggested 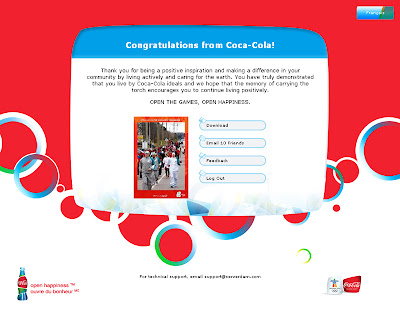 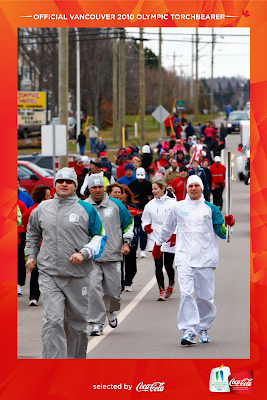 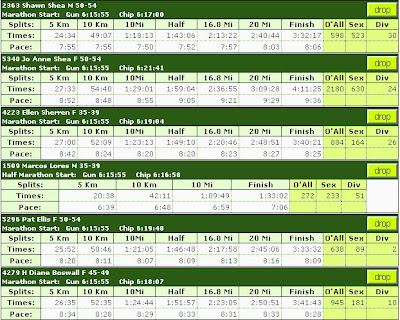 Congrats!
Posted by jypsy at 3:26 PM No comments: 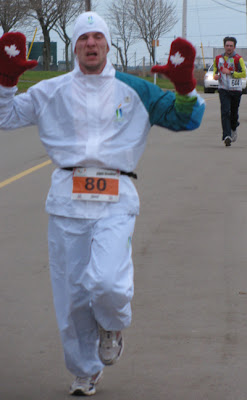 It was cloud and 6 degrees.

The figure 8 course on parade route and along waterfront.

Mark and Kelly McCosham were top male and female.

Next week The Jingle Bell Run at Roadrunner Christmas Party last run of 2009.

Running For Autism
Not Against It
acceptance, inclusion, awareness
Posted by Alex Bain at 6:31 PM No comments: 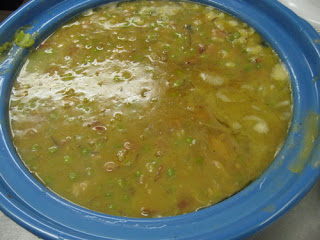 Wrap-up social with munchies and prizes at the Bluefin at 2:30 featuring Chef Michael Smith's Pea Soup.

SOURIS — The longest-running Christmas Parade on P.E.I. will celebrate a 29th anniversary here this Saturday when the town’s citizen of the year joins Santa as a guest of honour.
“It continues to shine year after year,” says Chrissy Conohan, one of the organizers of the Dec. 5 event.
“The weather seems to be with us, although two years ago it went ahead in a blinding blizzard.”
This Saturday is calling for a mix of sun and cloud but plus-degree temperatures should guarantee no blinding blizzards when the parade gets underway at 1:30 p.m.
Those attending the parade are encouraged to bring a donation for the food bank and the
P.E.I. Humane Society and items will be collected along the parade route.
Souris is in full seasonal gear with Christmas activities planned for both today and Friday as well.
Along with Santa Claus, handling the guest of honour duties will be Harvey Carter, who was named Souris 2009 Citizen of the Year and is designated parade marshal.
Carter, who works at MacIntyre House, is one of the most well-known faces in the eastern port town and is always up and down Main Street helping out and running errands for local business.
“A day doesn’t go by with Harvey stopping in to say hello,” says Conohan.
Over 100 floats are expected in the parade including antique cars and tractors, horses and other animals, mascots, the Christmas penguins coming from Mount Stewart, and six marching bands, including one from Moncton.
“We get folks coming from across the Island and as far as Tignish.”
The parade concludes with a free barbecue at the Sportsplex for the parade participants and an open canteen for the public.
Today, there will be interactive story and craft night from 6 to 8 p.m. at St. Mary’s Hall with a small admission to cover materials and a Christmas Present Bingo at the Eastern Kings Sportsplex.
The booklet bingo (bring your dabbers) starts at 7:30 p.m. and is a fundraiser for the rink operations.
The Christmas craft and gift fair goes Friday from noon till 9 p.m. and Saturday from 9 a.m. till 5 p.m. at the Matthew M. MacLean building.