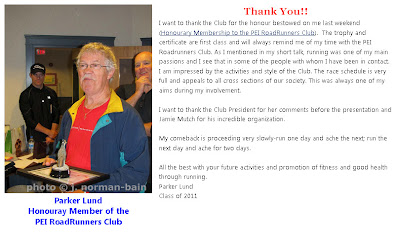 Congratulations Parker Lund!
Posted by jypsy at 8:00 AM No comments:

Islanders on the Run -Last Weekend in Lake Placid

SUMMERSIDE - Two local athletes had strong showings at the gruelling Ford Ironman event in Lake Placid, N.Y., on Sunday.Scott Clark of Linkletter and Dave Clark of Summerside competed in the 45-to-49 age category. Scott finished with a total time of 10 hours 52 minutes 44 seconds (10:52:44) while Dave checked in at 12:37:20.

"They claim it's the second toughest Ironman on the circuit because there is close to 9,000 feet of elevation through the biking and running courses," commented Scott, who competed in his third Ironman event.

It was Dave's second Ironman. His first one was in Florida in November 2010.

"I loved it," Dave said. "The course was beautiful, and I absolutely want to do it again at some point."

The participants started the race with a 3.8-kilometre lake swim.

The participants then changed into their gear for a 180-kilometre bike ride. A full marathon (42.2 kilometres) concluded the Ironman. The time between events is referred to as transition time.

Scott's run time of 3:28:59 was the second-fastest in his division.

"My goal in the run was I did not want to let anyone pass me, and I succeeded," he said.

Participants also had to deal with warm temperatures in the high 20s (Celsius).

"That was doable," said Scott. "We trained in the heat leading up to it."

The Clarks, no relation, did considerable hill training in the New London and Park Corner areas.

"If you do not do the training, you are going to pay the price out there," Scott added.

"They claim it's the second toughest Ironman on the circuit because there is close to 9,000 feet of elevation through the biking and running courses."- Scott Clark

"I had a good swim and a good bike, but the run got to me a bit" he offered. "The heat got to me and I had to walk a bit. But, overall, I was pleased with my time."

When asked what he learned from the Lake Placid experience that will help him in future Ironmans, Dave commented: "For me, the nutrition part, especially on the run. I need to add more salt or salt tablets to my running. . ."

The Ironman concluded at the outdoor skating oval next to the Herb Brooks Arena. Both facilities were venues for the 1980 Winter Olympics.

"It's just amazing scenery down in Lake Placid," said Scott. "It's quite a site as the runners are coming in. They announce your name and have you up on a big screen as you run half the oval to the finish line."

"The Atlantic Ocean in Banjul, The Gambia, after training for this moment for 7 months and running towards it for 424km with my team by my side. This is pure joy. Love you team." 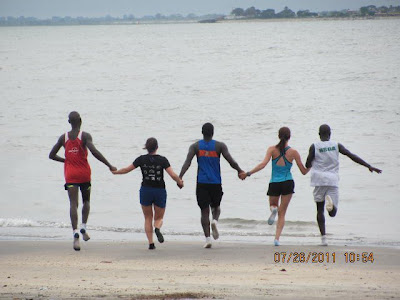 It was cloud and fog and 16 degrees.

Leo McCosham won the 8km race and Jillian Greene for the top female.

Nolan McKenna won the 4km race and Kelly Clements for the top female.

Running For Autism
Not Against It
acceptance, inclusion, awareness
Posted by Alex Bain at 6:14 PM No comments:

It was cloudy and 15 degrees.

Kris Taylor won the 10km race and Natalie Dallaire for the top female.

Carson Campbell won the 5km race and Madeleine Crowell for the top female.

Running For Autism
Not Against It
acceptance, inclusion, awareness
Posted by Alex Bain at 5:15 PM No comments:

A Message from Erin on her Cross Gambia Run

If you haven't been following Erin Poirier's Love4Gambia Blog as she runs 430Km across Gambia, now would be a good time to start. Today is Erin's 31st Birthday and here's a brief quote from her most recent blog post

Thursday July 14 is my birthday. We will be running 31km for my age, 31 years. Internet time is really limited and I can’t read many facebook messages. But if you would like to wish me happy birthday, I would love for you to donate $31 to Love4Gambia. Or $310. Just click on the “donate now” button on the homepage.

Go read the whole thing, I love the bit about the old ladies:

"running in the spot, 70 year old arms swinging back and forth, buckets perched gracefully on their old heads."

At least wish her well and wish her a very Happy Birthday! Read about the conditions she's running under and why she's doing it.

It was sun and clouds and 16 degrees.

Scott Clark won the race and Jennifer Pizio-Perry for the top female. 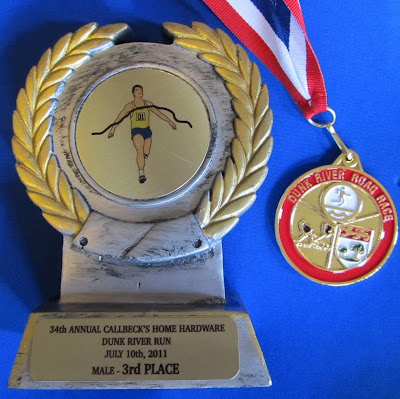 It was cloudy and 18 degrees.

The Hustle For Hoops at UPEI. The loop course on campus and Confederation trail.

Cal DeWolfe from Nova Scotia won the race and Jennifer Egan for the top female.

Running For Autism
Not Against It
acceptance, inclusion, awareness
Posted by Alex Bain at 12:45 PM No comments:

It was sun and cloud and 16 degrees.

The Boardwalk Boogie 6K at Shipyard Market. The out and back course on Summerside Boardwalk.

Connor McGuire won the race and Jennifer Pizio-Perry for the top female.

I won the Male 30 and under first place medal. 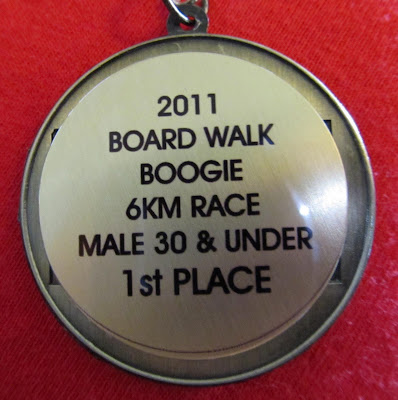 More Photos
Running For Autism
Not Against It
acceptance, inclusion, awareness
Posted by Alex Bain at 3:15 PM No comments:

Please Watch, Share, Donate - Erin Poirier is about to take on Gambia

Erin is about to take on Gambia