P.E.I. Olympic sprinter Jared Connaughton will be running for Canada at the world track and field championships.

He will be joining the 4x100 relay team in Berlin in August. The team qualified for the world championships over the weekend at a competition in Philadelphia.

Last summer, he competed at the Summer Olympics in Beijing in both the 4x100 relay and the 200 sprint.

We are very excited to announce our new website, please check us out at www.princeedwardislandmarathon.com

Registration for 2009 is now open with early bird pricing in effect(posted on the registration page). We have added a new category for 2009 the Ben's Smart 5K Run & Walk. To register for any of our events click here.

PEI Marathon co-chair Cheryl Paynter is working hard to increase the number of pace bunnies for our October 18th Marathon. Cheryl met Jack Heely in his capacity as a pace bunny in May of 2008 at the New Jersey Marathon and they have remained friends ever since. Jack has most graciously agreed to head north to pace in the BMO Nesbitt Burns Prince Edward Island Marathon Weekend and to offer his support and services to those training for this great weekend. Coach Heely will be available to answer your training questions and is also writing articles that will be posted on the site. To learn more or ask Coach Heely a question click here.

If you are interested in becoming a pace bunny for any of the 2009 categories please email alicia@eventsinc.ca

Bonus Registration Initiative:Â Anyone who registers for any of the PEI Marathon categories by May 30th, 2009 will be eligible to win a Marathon Prize basket of goodies valued at $200.

The 2009 Marathon Weekend has something to offer the whole family.
~ Your Race...Your Pace! ~
Posted by jypsy at 12:29 PM No comments:

Islanders on the Run - The Clarks at Big Sur

5k
Congrats you two!
Some Poetic Tributes to Scott
Posted by jypsy at 8:29 PM No comments:

Readers of this blog come mostly from the autism/autistic and running communities (and some, like us, with a foot in each). Traffic here is pretty constant but a few days every year there's a spike in readership. The day of the Boston Marathon is one of those days: 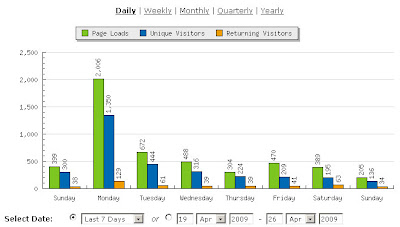 Chances are, some of those readers who just discovered this blog on Monday will return, maybe regularly, maybe next April....

Hello & welcome to all our readers
new & old, Islanders & foreigners, regulars & infrequent visitors.
We appreciate the comments we get here, in our email boxes and to our faces.

Islanders on the Run - Today in Grande-Digue

Today at the Grande-Digue 15K
275 Runners
Full Results
Photos
Photos of the Kids Race
Posted by jypsy at 2:03 PM No comments: 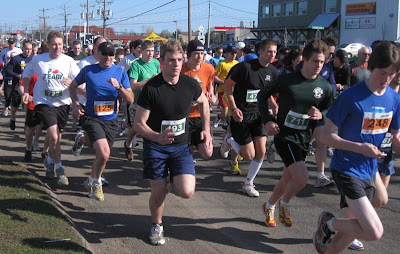 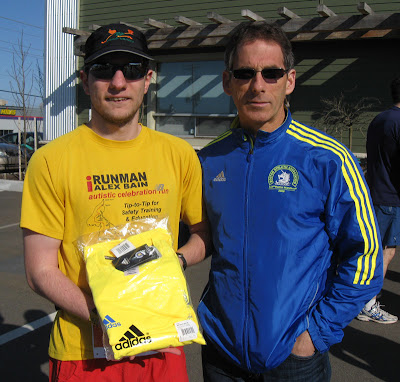 Running For Autism
Not Against It
acceptance not cure
Posted by Alex Bain at 4:19 PM No comments:

Photos of Islanders Running in Boston

I've looked through hundreds (thousands?) of photos and have found these: 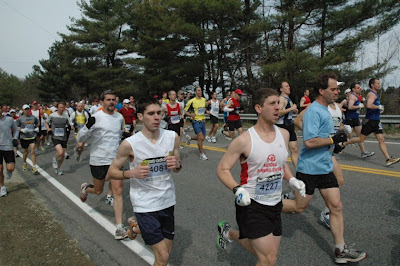 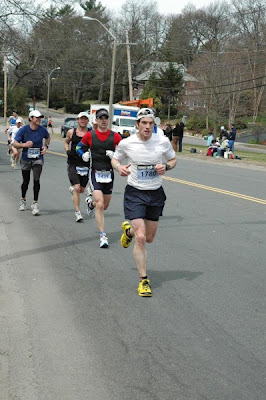 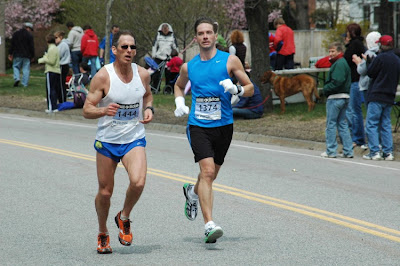 Unlike last year when I could look through all these photos and pick out the PEI Shirts, this year I had only faces, bodies and sometimes bib numbers to help. Those who know of my faceblindness issues will appreciate what an accomplishment it was to find the photos I did find. I'm sure I missed quite a few. If you have any or know of any, send the links to me or leave the links in the comments here.

It was very easy to pick out the guy wearing the PEI Marathon shirt (see him here, here and here and I spotted him in others as well), that's Charles Mandel of Bedford NS.

Maybe next year you might want to make my search easier by wearing your own PEI Marathon shirt. Other things that could make it easier for me to spot you - You could dye your hair or wear a wig. Dress up or just go with the top hat & tails. Be a superhero or a superheroine, or find a costume that suits you. You could also wear a bright hat or wave at the cameras.....

If you are going to use any of these photos,

Please feel free to re-post any photo with the condition that you give credit to the photographer with a link to Coolrunning.com on your site.
Example link:
photo by Ted Tyler from Coolrunning


Volunteers for the 2009 Canada Games will be wearing a Columbia two-piece golf shirt and jacket combination.
The new uniform, only one of the benefits volunteers with the Games will realize, is valued at $99.98 and was unveiled Wednesday.
Supporters, volunteers, sponsor partners and media were on hand for the debut of the gold golf shirt and red rain jacket emblazoned with the 2009 Canada Games Island-shaped logo and the Atlantic Lottery Corporation logo. Atlantic Lottery Corporation is the presenting sponsor of the Games’ volunteer program.
“Our $1.1-million contribution has allowed us to not only support and build the spirit of the Games since 1976, but to also support Team Atlantic and every Canada Games volunteer, through the volunteer services program,”?Joel Irvine, vice-president of sales and customer service with ALC, said.
A green zip jacket, a part of the familiar 1991 uniform jacket, was retired during the ceremony.
Joseph Spriet, president of the 2009 Host Society, said the Games still need volunteers. They are looking for 6,000 volunteers.
“We are in the unique position of being a provincewide Games, so we need volunteers from tip to tip to sign up,” he said.
“When volunteers apply, not only can they request a specific type of volunteer assignment, but they can specify which area of the province they would like to work in.” 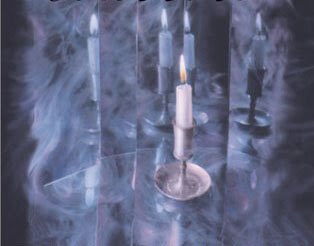 Andy Bryant, 27, crossed the finish line at yesterday’s Boston Marathon in a time of 3 hrs 5 minutes and 19 seconds good enough to place him in the top 6% of the 20,000 runners in the race. That’s a great accomplishment in itself, but when you take into consideration that fact that Andy is severely autistic its actually pretty amazing. Lacking the understanding of how to pace himself, Andy usually just takes off as quick as he can and relies on sheer will and determination to maintain it for as long as possible; which in this case happened to be 26 miles!

Bryant plans to continue running marathons for many years to come and with continued training hopes to eventually break 3 hour mark. Judging from his determination, anything is possible.

Andy Bryant, the autistic runner profiled in The Seattle Times on Sunday, ran a personal-best time of 3 hours, 5 minutes, 19 seconds in the Boston Marathon on Monday.

Bryant, 27, had hoped to finish in less than three hours, but he became tired late in the race and fell off his pace over the final three miles. Still, after spending most of 2008 recovering from a broken foot, Bryant was happy to run so well.

Because he ran a time better than 3:10, Bryant qualified for the 2010 Boston Marathon.

"For some reason, Andy does his best times at Boston, even though it's so tough," said his mother, Colleen Engle. "At the end, he said he just didn't have any more gas in his car. But he's going in the right direction. He'll break three hours someday." 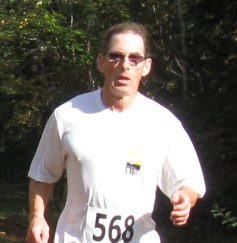 Leo McCosham
is scheduled to be on CBC Radio, Island Morning,
tomorrow (Tuesday, April 23rd) morning around 7:50am.

More added as we find them

Cheruiyot Pulls Out Of Boston Marathon

Andrew Bryant
Katie Sytniak
Aaron Pratt
Congratulations to All of You!