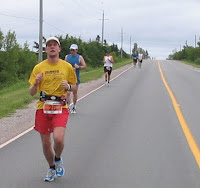 It was cloudy and 14 degrees.

The 2nd Fulton Campbell Half Marathon on the countryside, hills and Main Street Montague.

Mike MacKinnon won the race and Linda MacIsaac-Gallant for the top female.

Mark McCosham and Carla Murphy both won the 5km race. 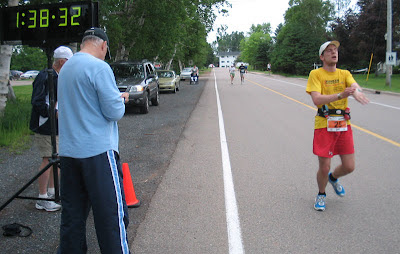 MONTAGUE — Mike MacKinnon of Miscouche captured the half-marathon portion of the Fulton Campbell Memorial Run here Saturday.
MacKinnon, 35, had a time of one hour, 17 minutes and 25 seconds in the 93-runner field at the 21.1-kilometre event. Scott Clark (1:19:50), Shawn McCardle (1:21:36), Evan Pemberton (1:22:48) and Leo McCosham (1:23:00) rounded out the top-five in the RoadRunner Championship Points Series race.
Linda MacIsaac-Gallant was the female winner of the half marathon. Her time of 1:34:30 was good for 20th overall. Corena Hughes, 29th overall, was the second female to finish in 1:38:38 and Bev Walsh, who was 36th overall, was the third female to cross the finish line in 1:42:10. A total of 93 runners participated in the half marathon.
Posted by Alex Bain at 3:01 PM

Congratulations on another personal best! Those blue shoes must be pretty good.

Awesome! Thanks for sharing, Alex!