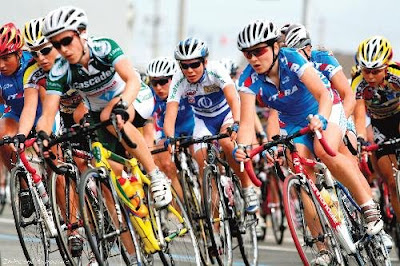 SUMMERSIDE
NANCY MACPHEE
The Journal Pioneer
With more than 100 world-class female cyclists taking to Island roads Sunday, traffic restrictions and delays will be a given.
With the five-day, five-stage Tour de P.E.I., organizers are looking for the best ways to stage a worry-free event and handle the inevitable disruptions.
Traffic restrictions in Summerside Sunday during Stage 1 of the Tour are among the most extensive.
“The course itself is fully closed,” explained Tour de P.E.I. logistics co-ordinator Mark Fisher. “There are about 50 different crossroads in Summerside. It’s actually our busiest day in regards to course stuff. It’s such a big course in such a small, little town. It really does suck up the whole city.”
At 8 a.m., Harbour Drive between Granville Street Extension and Water Street, at the Waterfront Mall entrance, will be closed. This is to accommodate the start/finish line for the race. At 8:30 p.m., this area will re-open to through traffic.
Although the first leg doesn’t begin until 3:30 p.m., the full course closure will be in effect at 2 p.m.
The first stage of the Tour de P.E.I. is expected to take two and a half hours, with most traffic restrictions lifted within 30 minutes of its conclusion.
Summerside police deputy Chief David Griffin said the details, such as the number of officers needed for the event, are being finalized.
“We are going to be covering at least 14 intersections,” Griffin said Wednesday. “We’ll have extra men on and we’ll be using our school crossing guards.”
There will be restricted access at the Granville Street/Ryan Street intersection, and at Pope Road and Greenwood Drive.
“When the tour passes and the police deem it safe, they let a few cars go,” said Fisher. “They have about 12 minutes between laps and they can let go as many cars as they want.”
When the lead police car, which travels about a kilometre ahead of the tour, passes, the road will be closed off.
Signage will be erected at Summerside’s main entrances advising the public on the restrictions and road closures.

Stage 1: Sunday
The start/finish line for Sunday’s leg of the Tour de P.E.I. in Summerside will be at the Loyalist Lakeview Resort on Harbour Drive. Cyclists will travel west on Harbour Drive, turning onto Water Street continuing along South Drive to Pope Road. At Pope Road, they’ll turn onto Central Street then a quick right onto Pope Road Extension then onto Ryan Street Extension. Cyclists will continue along Ryan west onto Water, ending up at the Loyalist.
The 9.9-km circuit will be repeated 10 times before cyclists cross the finish.

Stage 2: Monday
Bridge closed four hours Monday
By Nancy MacPhee
Journal Pioneer
BORDEN-CARLETON – Those planning to cross Confederation Bridge Monday may want to explore other options.
Stage 2 of the 403-km Tour de P.E.I. takes to the bridge Monday, resulting in closure to all traffic between 10 a.m. and 2 p.m.
It’s only the fourth time the Confederation Bridge has been closed to all vehicles.
“We’re doing a lot of PSAs so that people everywhere, by now, know that the bridge will be closed and they can make alternate arrangements,” said Michel Le Chasseur, general manager of the Confederation Bridge, the Tour’s major sponsor.
The cyclists begin the 14.54-kilometre leg of the race at 11 a.m. from the Cape Jourimain Nature Centre on the New Brunswick side. Racers will leave one by one to cross the Northumberland Strait in the time trial.
That stage of the Tour is expected to be complete by 1:30 p.m.
Speeds are expected to reach 60 km/h.
In the case of an emergency – such as an ambulance needing to cross – the race could be stopped, said Le Chasseur.
“Public safety and security comes first,” he added.

In the latter stages of the Tour de P.E.I., which are largely rural routes, residents in these areas have been notified about possible traffic interruptions and when cyclists should be in their area.
“There’s what we call a six-kilometre rolling road closure,” explained tour logistics co-ordinator Mark Fisher.
RCMP travels ahead of the tour in these areas, closing down sections of road until the cyclists pass.
The biggest concern in rural areas is animals, particularly dogs.
“One of the major things about going along the countryside is to make sure that dogs are inside the house or tied up,” said Le Chasseur. “If a dogs gets into the (cyclists), then it’s chaos.

Stage 3: Tuesday
Stage 3 is Tuesday, beginning at 2 p.m. and ending around 5:45 p.m. Said to be the more challenging legs, cyclists begin in Kensington and continue on Route 20 through Park Corner, along Route 2 through Freetown, Kinkora and North York and Rustico. Stage 3 is 120 km.

Stage 4: Wednesday
Stage 4 begins at 2 p.m. Wednesday. Cyclists leave from the National Park on a 119-km tour through Tracadie, Mount Stewart and into Montague. They continue through Orwell, Cherry Valley and Pownall, ending in Stratford.

Stage 5: Thursday
The final stage, 49.25 km, begins at 5:30 p.m. on Thursday, June 12, winding its way through downtown Charlottetown, with full course closure. The awards ceremony follows at 7 p.m., after which there is a free concert on the steps of the Confederation Centre of the Arts.
Photo courtesy of Full Frame Media

http://www.journalpioneer.com/index.cfm?sid=140902&sc=120
It’s the cycle of life for P.E.I.
EDITORIALS
The Journal Pioneer

For the second year in a row, P.E.I. will be thrown into the international spotlight, thanks to more than 100 spandex-clad cyclists.
In 2007, the inaugural Tour de P.E.I. was introduced. Although it had its growing pains the event was deemed a huge success, attracting the cream of the crop in women’s cycling from across the world and thousands of spectators.
The Tour de P.E.I. was later televised, showcasing our isle to an even wider audience. More than 600,000 North Americans tuned in to see P.E.I. and its Tour. Media coverage reached more than one million households.
The buzz surrounding the inaugural event only increased as the Island’s burgeoning reputation as a cycling destination got a boost when the event received the accolade of Road Event Organizer of the Year by the Canadian Cycling Association.
Soon, our Island’s picturesque harbours, rolling hills and historic landmarks will once again provide the backdrop for the five-day, five-stage world-class cycling event.
It’s expected the number of spectators – those cheering on cyclists along Island roadways during the event, as well as those at home watching telecasts after the fact – will far surpass that of last year.
More networks will carry the telecast, which will include a behind-the-scenes making of the Tour de P.E.I.
And Sunday is expected to be the largest draw for spectators. That’s when the 100 top-ranked cyclists will kick off the five-day event in Summerside – a region, according to a recent study released by UPEI’s Tourism Research Centre, that ranks close to the bottom in length of overnight stays by both tourists and travel parties.
Who knows, maybe the Tour will even give Summerside tourism a boost.
Yes, there may be inconveniences associated with the event, such as the four-hour closure of the Confederation Bridge and traffic delays in P.E.I.’s two cities and along various rural routes. But the exposure and publicity this province will receive thanks to the event more than make up for the traffic tie-ups.
The event, likened to the Tour de France for women, promotes not only the sport of cycling, but the Island as a destination for amateur cyclists looking for a place to vacation.
In this day and age, when tourism numbers are on a steady decline across the country, introducing an eco-friendly event that can open the doors to a new brand of visitor should be applauded.
Tour de P.E.I. is more than a bike race; it’s smart business.

Next week, the Provincial Department of Transportation and Public Works will be working hand-in-hand with organizers of the Tour de P.E.I. International Women’s Cycling Event to help ensure the safety of road users and cyclists.

The event takes place June 8 to 12 with races each day.

June 9-11 will be of particular interest to the travelling public because several Island roads will be interrupted temporarily as the cyclists and their caravans pass by.

Motorists are urged to obey all traffic control personnel and drive with care in affected areas as several roads will be closed temporarily. RCMP will be asking drivers to pull over to the side of the road when the caravans approach and remain there until the last police vehicle passes by.

On Monday riders will take part in the Confederation Bridge Time Trial. Due to the nature of this event, the bridge will be closed from 10 a.m. until 2 p.m.

On Tuesday riders will race from Kensington to North Rustico starting at 2 p.m. Routes affected include Route 20 from Kensington to New London, Route 8 from New London to Freetown, Route 109 from Freetown to Kinkora, Route 225 from Kinkora to Warren Grove, Route 248 from Warren Grove to Milton, Route 224 from Milton to New Glasgow, Route 13 from New Glasgow to Cavendish, and Route 6 from Cavendish to North Rustico. Route 2 will also be affected during portions of this stage, as riders must cross in two locations -- Route 8 in Summerfield and from Route 248 to Route 7 in Milton.

On Wednesday 11 riders will race from Dalvay to Stratford via Montague starting at 2 p.m. Routes affected include Route 6 from Dalvay to Mill Cove, Route 219 from Mill Cove to Route 218 and onto Route 2, Route 2 east from 218 to Mount Stewart, Route 22 from Mount Stewart to Davey’s Corner, Route 5 from Davey’s Corner to Cardigan, Route 4 from Cardigan to Alliston, Route 324 from Alliston to Glenwilliam, Route 24 from Glenwilliam to Kinross, Route 210 from Kinross to Orwell, Route 1 from Orwell to Pownal, Route 26 from Pownal to the Crossroads intersection and down Stratford Road to the finish line at the new CGI building at Glen Stewart Drive.

On June 9 and 12, races will occur within the city limits of Summerside and Charlottetown. For details on those and the above listed routes consult the Tour de PEI website at www.tourdepei.com.

~*~
On Tuesday, Alex and I will be going up the road a couple of Kms to Wheatley River
to watch the ladies zip by (on "Route 224 from Milton to New Glasgow").
Posted by jypsy at 9:03 AM