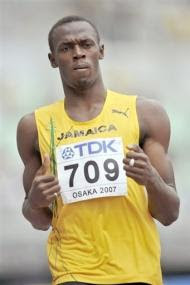 Bolt, the 200m world championships silver medallist, had signalled his arrival on the 100m scene in this Olympic year in early May, when he clocked 9.76 - then the second-fastest time in history - at a meeting in Jamaica.

Bolt's performance on a night disrupted by thunderstorms and lightning, jolted a crowd of 6,490 that included a big Jamaican contingent.

Bolt had already set the athletics world buzzing on May 3, when he clocked 9.76 - second fastest in history - at a meeting in Kingston.

Even after that, the lanky Jamaican, runner-up to Gay in the 200m at last year's world championships, had said he thought the longer sprint was for him.

China's superstar hurdler Liu Xiang opted not to defend his 110m title, pulling out of the race complaining of a tight hamstring.

The world record holder, Olympic and world champion still made an appearance on the track, standing next to an announcer as he explained to the crowd Liu's decision not to risk the defense of his Olympic title in Beijing in August.

Liu then addressed the large Chinese contingent in the stands in his native language.

After a false start, Campbell powered to victory in 10.91sec, fastest in the world this year.

"I'm running good," said Campbell, who improved on the 10.93 posted by American Allyson Felix in Doha on May 9. "My object is to run faster than I did last year. I accomplished that and I'm happy.

"I'm so happy to come in and execute the race as planned."

Wallace Spearmon won the 200m with a time of 20.07, second-fastest of the year behind Gay.