BORDEN-CARLETON-- American cyclist Kori Kelley Seehafer (Menikini-Selle Italia-Masters Colours) wears the yellow jersey after today’s race across the Confederation Bridge. An elated Seehafer celebrated with one hundred local students who came out to show their support for the athletes.

The Tour de P.E.I. presented by Scotiabank, is a five stage International women’s cycling event which runs from June 8-12, 2008. Stage 3 will see the women racing 120.2 km through the hills of P.E.I. from Kensington to North Rustico. 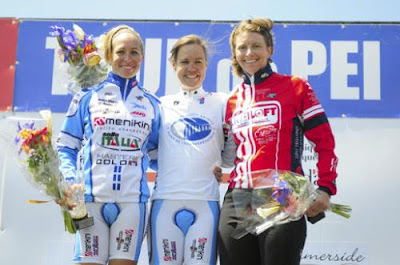 Team Menikini-Selle Italia continued to dominate Tour de P.E.I. with two of its riders on the podium Monday. Kori Seehafer, centre, of the United States won Monday’s time trial, receiving the yellow jersey, while teammate Nathalie Bates, right, of Australia was second. Team NEBC Cycle Loft/Devonshire Dental’s Sally Annis of the United States was third. The time trial took place on the Confederation Bridge.
For more, log on to www.tourdepei.com. Transcontinental Media photo
BORDEN-CARLETON — An Italian team continued its dominance of the Tour de P.E.I. during Monday’s time trials on Confederation Bridge.
American Kori Seehafer, who rides with the Italian team Menikini-Selle Italia/Master Color, won the individual 14.5-kilometre time trial with a time of 26:26 to capture the yellow jersey as overall race leader.
Strong headwinds during the ride from Cape Jourimain to Prince Edward Island provided the main challenge facing the riders, but the Italian team stuck to their strategy to win the stage, said Seehafer.
“We have a very strong team here and we want to make sure that we have the numbers and we’re winning stages, and we want to win the overall (event),” said Seehafer. “Say you only have five tokens to spend and the team chooses to spend them at the wrong time, you lose the race. So we have to be smart and not use all our tokens at one time.”
Seehafer said she’s a strong time-trialist but she didn’t expect to win the stage.
“I really wanted to stay next to the railing and stay as low as possible, so the railing was above my head,” she said. “I almost ran into the railing because of (the wind).”
Calgary native Jenny Trew went into the second stage wearing the blue jersey as the top Canadian in the field after finishing fourth Sunday.
The sprint specialist and member of the Moncton-based Atlantic Cycling Centre team said time trials are tough going for her but she did her best, finishing in 32:21.
“I went out, gave it everything I could, enjoyed it and it was pretty special to have the Canadian leader’s jersey on today and just enjoy it while I was out there,” she said.
Trew had to relinquish her blue jersey to 17-year-old Denise Ramsden of Kingston, Ont., who rides with the Ottawa-based Ultralink team. Ramsden finished fourth in time trails in 26:49.
She finished well back in the pack Sunday after she was involved in a crash that sent two Ukrainian riders to hospital.
“I had no idea that I was (the top Canadian),” said Ramsden. “I had some motivation from yesterday and I wanted to try and move up.
“I knew it was going to be hard with the wind.”
Race officials said the two Ukrainian cyclists were released from hospital, one with minor bruises and the other with a dislocated shoulder.