ST. LOUIS — Twenty-six crewmembers of the naval ship HMCS Charlottetown will be running across Prince Edward Island in August to raise money for the Children’s Wish Foundation.
For Leading Seaman Michael Murphy, this will be the sixth time he takes part in the Run 4 Wishes.
The “4” is pretty
significant: the crew is
hoping to raise enough
money to grant the wishes of four children living with
life-threatening illness.
So far, the crew, through on-ship fundraising activities, has raised $10,000, enough to grant one wish.
“This is an event the whole ship is behind,” said Murphy, speaking to students and staff at St. Louis Elementary School. There will be more crewmembers than ever before participating in the r 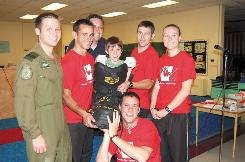 elay, and they are hoping to involve more P.E.I. businesses and individuals in the fundraising than ever before.
At St. Louis Elementary, they enlisted the help of student Dillan Allan. Dillan and his father Randy have run with the team the past three years, and they will be doing so again.
He has collected sponsorships in the past, but this year the HMCS crew provided him the means to involve the entire school. Any student wishing to support the cause was given a collection carton to take home. Dillan will be representing the school in the Run 4 Wishes this year, and all monies students turn in for the cause will be counted on his sponsor sheet.
Run 4 Wishes team members from the naval ship HMCS Charlottetown,
give St. Louis Elementary School student Dillan Allain a lift in an oversized shoe.
Allain will run with the team in August when they conducted their run across
P.E.I. in support of the Children’s Wish Foundation. Giving a helping hand,
background, is Jason MacLean, fundraising coordinator for Children’s Wish. Team
members include, from left, Cpt. Michael Jordan, L.S. Michael Murphy,
M.Seaman Joey DeWolfe, Sub. Lieutenant Marcie Dean and, in front, Sub. Lt. Joe MacDonald
Posted by jypsy at 8:50 PM