Some Boston Marathon Basics for those of us watching back home 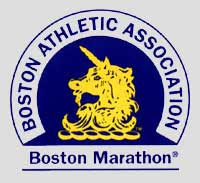 The B.A.A. will broadcast every 5Km split to its web site and family and friends can track your progress by logging in and entering your name or bib number. The "face" of the Boston Marathon web site will change on race day and the process on how to enter the search will be clear.

Boston is considered one of the more difficult courses in marathoning, because of the infamous Newton Hills which reach their peak at Heartbreak Hill.

The historic course begins on Main Street in Hopkinton, a town 26 miles southwest of Boston.

The course continues on Route 16 through Newton Lower Falls, and turns right at the Newton Fire Station, onto Commonwealth Avenue.

Runners trek along Commonwealth Ave, through the infamous Newton Hills, up Heartbreak Hill, and past Boston College before turning onto Chestnut Hill Ave. towards Cleveland Circle.

The course then turns left onto Beacon Street and into Kenmore Square where runners once again follow Commonwealth Avenue.

In the homestretch, the course turns right onto Hereford Street and then left onto Boylston, finishing in Copley Square.