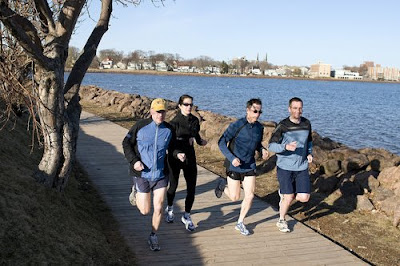 Approximately 20 runners from Prince Edward Island will be travelling to Boston to run the historic
Boston Marathon Monday. Some of them were running on the Victoria Park boardwalk recently.
From left are Greg Arsenault, Stratford; Allie Keedwell, Charlottetown; Leo McCosham,
Charlottetown and Paul Baglole of Meadowbank. Guardian photo by Brian McInnis 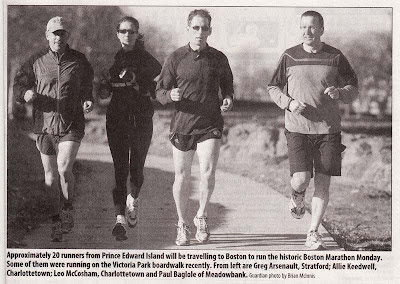 In the running
PEGGY REVELL
The Guardian

After training through a rough winter, 18 Islanders will become the largest group from P.E.I. to ever run in the Boston Marathon on April 21.
“It’s sort of a dream come true," said Jennifer Nicholson of Cornwall, who will be running for the first time in the world’s oldest annual marathon. “I’m very excited, super excited.”
“Having been there before, I know it’s a fantastic event,” said Paul Baglole of Meadow Bank, who will be running for the fourth time along the 26 miles and 385 yards that make up the race.
With over half a million people watching from the sidelines, the Boston Marathon is the largest single day sporting event next to the Super Bowl.
Part of its importance comes from the runners having to qualify in advance at other certified marathons, said Baglole.
“It’s a recognition that you’ve made it to a world-class event,” he said. “It’s something for a runner to strive for.”
The Boston Marathon is kind of the marathon of all marathons, said Nicholson.
It’s been 19 years since Richard and Judy West of Charlottetown first ran the Boston Marathon together, but this year they’re finally heading back for a second turn.
“We just decided we’d like to do it again,” said Richard West. The couple run in marathons around the world, the most recent one being in Italy three weeks ago. With over 20,000 participants running in the Boston Marathon this year, West is looking forward to seeing how it has changed after 19 years when he ran with around 8,000 people.
If training for a marathon wasn’t already hard enough, the Islanders were trying to do it through an unpredictable and long winter.
“Every weekend there would be a new weather challenge,” said Baglole. “Sometimes good, and mostly bad.”
It’s been a difficult winter, said Alexandra Keedwell of Charlottetown, who will be running the Boston Marathon for her second time. Training sometimes included running 18 kilometres through snow on freezing cold, windy days.
But enduring the Island’s winter ended up helping her out, she said, since much of marathon running is about being challenged mentally.
“Our winter probably prepared us better than any other place,” she said.
What also helped was the support of so many other runners on the Island.
“I don’t think I could have done it by myself,” said Nicholson, who was out running with Keedwell on some of the coldest days. The running community on the Island is great, said Nicholson, helping so many people get ready for Boston.
Posted by jypsy at 7:13 AM