Captain Adwin Gallant at the Sand Marathon in Morocco 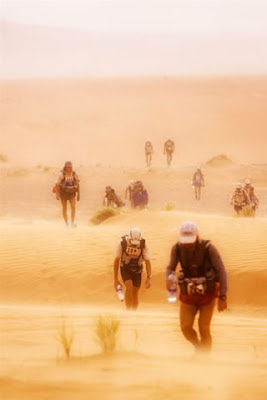 Just caught the end of a story on Island Morning (CBC Radio) this morning, that I assume was also on Mainstreet as it was Matt Rainnie doing the interview. Matt talked to Captain Adwin Gallant, formerly of Souris, who completed the 240Km Sand Marathon (Marathon des Sables) near Ouarzazate in Morocco.

The race includes a full marathon on one day, and a 50-mile stage, as well as others of varying length and terrain. Competitors must carry all their equipment on their backs. Only a carefully rationed nine litres of water and open-sided local tents are provided daily by the organizers.

The route for 2008 is 245.3 Km long, making it the longest ever in the history of the MARATHON DES SABLES.
The race will be challenging from day one - and continue that way - offering all the variety of the Sahara. The course will take runners over ergs (dune zones), seriously steep jebels (up to 25% slope factor) and rocky plateaus. They’ll have to cross hard as iron salt-flats and the driest of wadis. The backdrop to all of this is the most beautiful of landscapes with vistas accessible only to those on foot. The desert has its secret gardens and competitors on MDS will be lucky enough

In its 22-year history since it was set up in 1986, the Marathon des Sables has brought together near-on 10,000 competitors in the south Moroccan Sahara.
Whether running individually or in teams, competitors are self-sufficient in food and must carry all their own equipment (food and compulsory kit) during the entire race.
Marathon runners and trail runners worldwide consider the race to be the “Grail” of footraces. It’s one of the most difficult in the world: around 230km, freestyle, run in 6 stages varying from 20 to 70km, taking in all the different terrain in this particularly beautiful part of Morocco.
With average speeds going from a minimum of 3 Km/h to maximum 14 Km/h, the Marathon des Sables is an extraordinary course, characterised by its spirit of conviviality and solidarity.
For this 23rd edition, organised by AOI under the aegis of the Moroccan Ministry of Tourism, around 850 competitors will be setting off to conquer the Moroccan sands on March 30th. 30% are French, the other 70% made up of more than 32 nationalities, with a strong Anglo-Saxon presence

Sportsmanship, solidarity, conviviality and respect for the environment: these are the organisation’s key words.

Here's how Captain Gallant did: 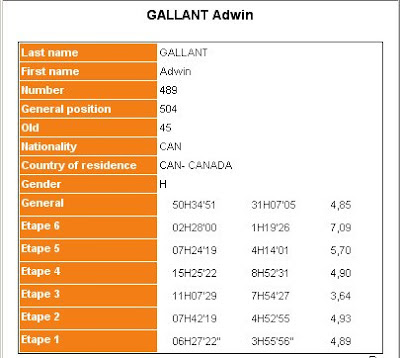 I found the following article on Captain Gallant and his fellow officer, Capt Meagan McGrath, who also went the distance at the Sand Marathon. Captain McGrath placed 287. :

Two CF members to cross the Sahara in 2008 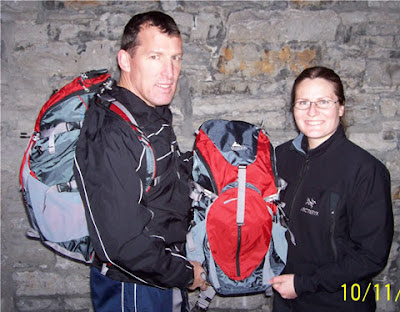 Some will tell you that Canadians are used to extreme weather conditions. From the suffocating heat of a Montréal summer to the Siberian cold of the Prairies—a temperature range of over 80°C—Canadians have seen it all, right? So you could say that living in Canada is good preparation for the two CF members getting ready to confront the harsh climate of the Moroccan desert.

Captain Adwin Gallant and Capt Meagan McGrath, both from Ottawa, are currently preparing for the Sand Marathon, to be held in Morocco from March 28 to April 7, 2008. It’s a seven-day endurance race during which some 700 participants will be running more than 240 kilometres in one of the most inhospitable climates on the planet.

You might wonder why anyone would even want to attempt such a thing. The two CF members say it’s the physical and psychological challenge of the race that motivates them. Capt McGrath, who recently scaled Mount Everest, thrives on this type of adventure. When she told her colleague and friend, Capt Gallant, another outdoor enthusiast, she wanted to run this marathon, he jumped at the chance of joining her. So started the long process of making this adventure possible.

The two adventurers divided up the work that needed to be done to co-ordinate the event preparation. Capt Gallant put together a sponsor solicitation kit explaining in detail what the Sand Marathon is and the costs and benefits for any sponsor associated with the event. His work paid off handsomely: not only, did he raise funds, he assembled the outdoor and sports equipment they needed to tackle this long journey across the Sahara Desert. “This project is very important to us, and we are preparing for it entirely outside of our military duties. This means balancing the investment of time and financial resources with our respective job demands,” explains Capt Gallant, an aerospace engineer with the military helicopter project office. After more than 27 years in the CF, Capt Gallant, who is getting ready to retire, says, “It’s the right time for me to take on this challenge; I have to do it while my health and physical condition permit.”

Nothing is being left to chance. The two adventurers have planned all the equipment needed right down to the smallest detail— everything from a suction pump to extract snake venom, to a water purification kit, sunscreen, compass, food and an iPod, all packed in a backpack, which should ideally not weigh more than nine kilos. As for food, though the organizers require that each participant consume at least 2 000 calories a day or 12 000 calories for the entire marathon, the two Canadians are planning to up their caloric intake slightly. Most of the meals are freeze-dried to reduce the weight, but they’ll also be carrying nuts, dried fruit, power bars and chocolate. Participants also consume, on average six to seven litres of water a day, which is provided to the runners at the various relay points at each stage of the event.

Logistical preparation might be crucial, but so is the physical training. Marathon runners talk about “getting kilometres under their feet”, an expression which indicates how important it is to accumulate long hours of walking and running, and unfortunately, there’s no substitute. Capt McGrath is taking advantage of the fact her home lies 20-some kilometres from her workplace. “For me, it’s an opportunity to get in those precious hours of walking and running, and get my body used to the long days we can expect in Morocco. It’s also the best way to avoid injuries and blisters that can cut our adventure short,” she explained, who is an experimentation planner with the Canadian Forces Aerospace Warfare Centre.

It’s a good thing that the two CF members are outdoor enthusiasts, because there is nothing cushy about the down time either. The temporary bivouacs provided by Sand Marathon organizers are far from the five-star category: a mat on the ground and an ultra-light sleeping bag is as good as it gets. You have to develop extraordinary recovery abilities in order to make it through the tough days in the desert, and this is exactly what Capt Gallant and Capt McGrath intend to do.