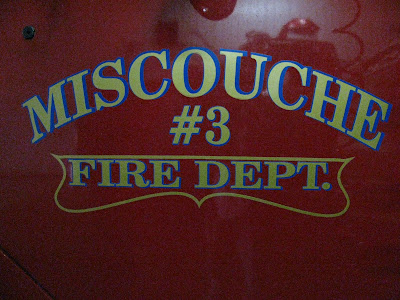 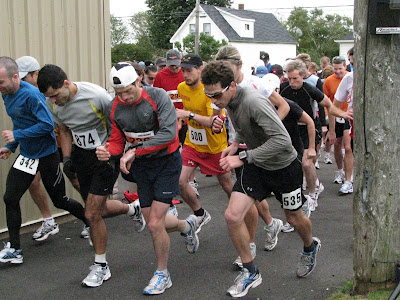 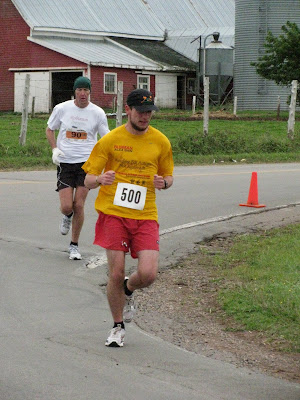 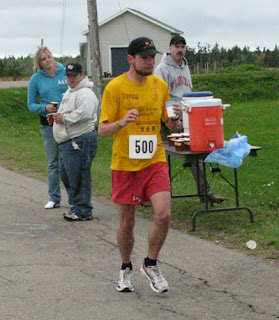 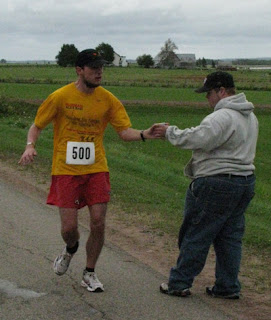 It was cloud and windy and 9 degrees.

The out and back course from the firehouse and out on Belmont.

Stanley Chaisson won the race and set a course record at 56:22 and Jen Nicholson also beat the course record for the top female in 1:02:25.

Tomorrow I run the AIDS Run For Life at Confederation Centre.

More Photos (There were a bunch of photos missing from this set that are now there.... sorry!)

Scott bought me a poster and sticker from Ironman Lake Placid. Thank You Scott! 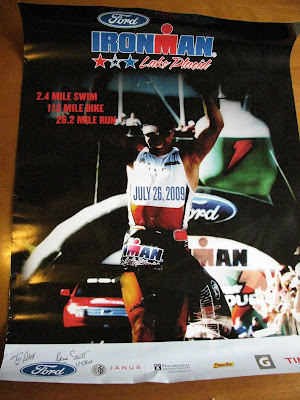 Twenty-seven-year-old Bear River native Stanley Chaisson, who now resides in Charlottetown, was the overall winner in 56 minutes 22 seconds (56:22). Jen Nicholson, 40, of Cornwall knocked almost 10 minutes off the previous-best female time. She stopped the clock in 1:02:25.

MISCOUCHE -- It was a record-setting day at the Miscouche Firefighters 10-Mile Run on Saturday morning.
Bear River native Stanley Chaisson, who now resides in Charlottetown, and Jen Nicholson of Cornwall established new course records. Chaisson's time was 56 minutes 22 seconds (56:22), breaking Paul Thibideau's 57:40 standard set in 2003.
"I was pleased with my time and it was the first time I've done the course," said Chaisson. "I felt good."
Meanwhile, Nicholson, 40, knocked almost 10 minutes off the female record en route to finishing sixth overall. Her time of 1:02:25 shattered the previous mark of 1:12:16, which was set by Elaine Burkholder in 2006.
"We (Nicholson family) have a lot going on today (Saturday) and I woke up this morning and kind of decided at the last minute that I'd run it," said Nicholson. "I wasn't really planning on it, which was good because I didn't get too worked up or too nervous about it."
Nicholson said the wind didn't bother her too bad and the temperature was perfect for running.
"Someone said the wind is always a factor and they were calling for wind today," she said. "There were certain places it was a little gusty, but certainly not the whole race and I didn't feel it slowed me down or anything."
Personal bests
Overall, 15 personal records were achieved and awards were presented to the male and female runners with the most improved times.
John VanErkis, with an improvement of 11:57, took the male award and Lisa Doiron, who improved her time by 13:27, took the female honour. VanErkis finished 18th overall in 1:10:23 and Doiron was 30th in 1:18:48.
The 56-runner field didn't waste any time getting away.
"Mike MacKinnon led the way for the few K (kilometres) and it was a really fast start," said Chaisson. "It's a very deceiving course.
"It looks flat, but once you get out there it's rolling hills and the wind was tough today. It made it even more challenging."
The race started and finished at the fire department in Miscouche and featured an out-and-back course on Lady Slipper Drive and Belmont Road.
"It was a fun run," said Nicholson. "It wasn't too hilly and was kind of rolling, which is what I like."
With the Prince Edward Island Marathon on Oct. 18, this run served as a tune-up.
"What my training partner (Rob MacKenzie) and I did today was we built this race into our long run," explained Chaisson. "We did a few kilometres beforehand and now we're going to do a few kilometres after.
"It's perfect because it's a month away from the marathon and this race is a great way to gauge where you're at."