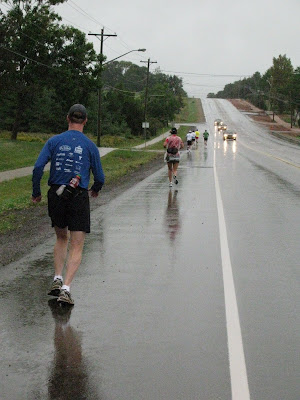 It was cloud and rain and 16 degrees. The long run for PEI Marathon. 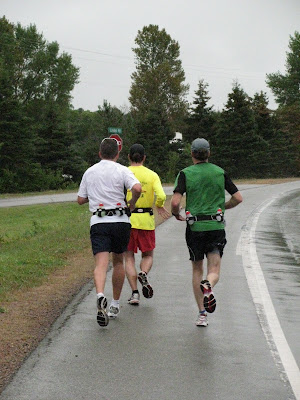 The route on Sherwood to Highway 2 to Bedford and back on Confederation trail like end of marathon.
I ran with Gary Simmons, mom ride a bike. 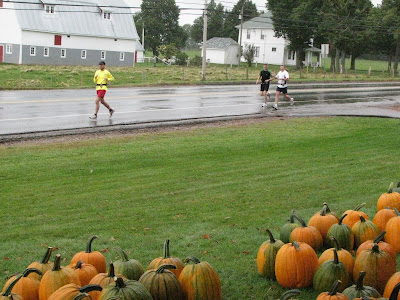 After the long run I went back home to dry and change for Terry Fox Run. 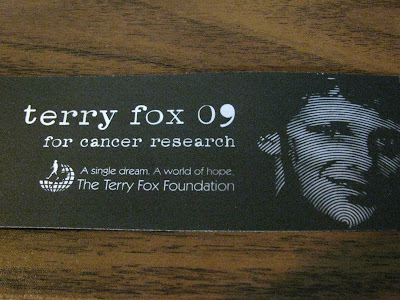 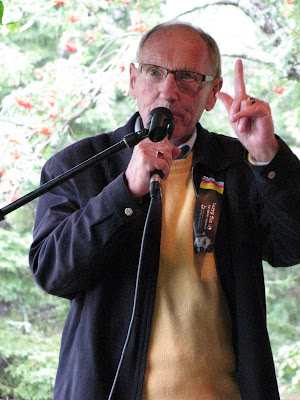 It was still raining and recovery run from long run this morning. 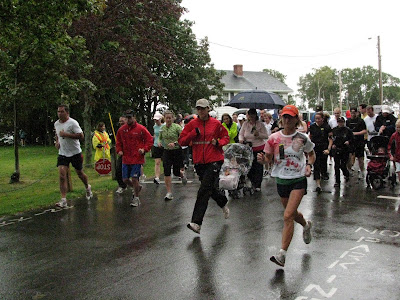 I ran 2 laps of 5km in Victoria Park and Brighton. 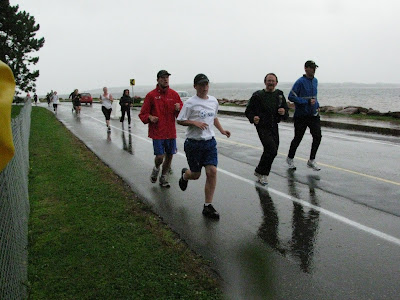 When I finished I ran 46km today. Most ever in one day. 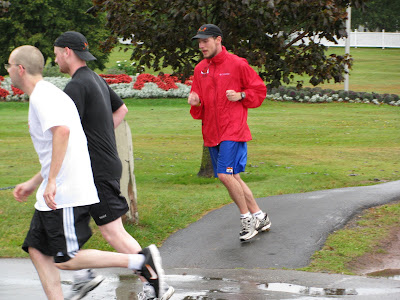 Thank You to everyone who donated! I raised $145. 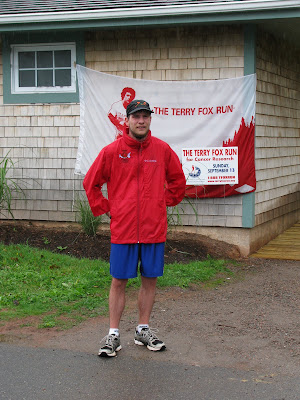 Next year I run the out and back on Confederation Bridge for 30th Anniversary Run.

The Guardian
Eric MacEwen takes the microphone to begin his address to people huddled under the tennis clubhouse veranda at Victoria Park just prior to the start of the annual Terry Fox Run in Charlottetown.


Organizers for the 29th annual Terry Fox Run were pleased with the turnout for the event yesterday at Victoria Park in Charlottetown.
Athena Doyle, Charlottetown Terry Fox Run organizer, said the rain did play a factor in the number of participants for the event but she was impressed with the dedication shown by the over 100 people who took part.
"Our numbers were down because of the rain. The people that showed up to brave the rain are brave souls."
The event raised about $5,000 for Cancer research with more donations coming from those who could not make the event today.
As hard as it was with the weather, everyone who helped out and participated are much appreciated, Doyle said.
"They made the day worthwhile."
The proceedings started with a speech from Eric MacEwen, host of the Eric MacEwen Show on CFCY radio.
His words contributed greatly to the event and inspired those who attended, Doyle said.
"We really enjoyed him. He had a lot of positive words for us."
The 2010 Terry Fox Run, which is also the 30th anniversary of the event, is scheduled to take place on the Confederation Bridge.

Terry Fox run goes in city through efforts of one woman


SUMMERSIDE – The legacy left by Terry Fox to find a cure for cancer wasn’t allowed to die this year in Summerside thanks to efforts of one woman and the support from within the community to keep that dream alive.
Linda A took on the challenge or organizing the Terry Fox run in Summerside after reading two weeks ago that no one was planning to stage the event this year. Fast footwork and with the support of local businesses such as Waterfront Mall, Sobey’s, Price Choppers, Superstore, the chief of police and dedicated volunteers, A was able to pull the event off. The numbers were far below those of past Terry Fox runs but given the time frame the response and the money raised made the event a success.
“The turnout I think, considering it was cancelled has been excellent,” A said prior to the start of Sunday’s run. “There’s been a good response. I’d like to see more numbers here right now but, considering the last minute notice, I’m really pleased.”
A said one of the volunteers and participants is nine-year-old Thomas Haslam from Springbrooke. Haslam collected $167 in pledges and was the first to donate his money to the Terry Fox Run.
Grace Haslam, Thomas’ mother, said participating in the Terry Fox Run has been a dream her son has had since he was four years old.
“This is a dream come true for him to participate in the Terry Fox Run,” she said. “He’s been waiting for five years.”
A said thirteen volunteers answered the call to help get the event organized and up and running.
“Everybody has been really supportive,” she said. “There haven’t been any negative comments at all. Business has supported us. I’ve got water that’s been donated by Sobey’s Price Chopper’s and the SuperStore. The chief of police (Dave Poirier) has been amazing. He’s been a great help. He’s got or (run) maps done for use, he’s taken care of the crossing guards.”
A was encouraged by the level of support that jumped on board in such a short time and she intends to keep the terry Fox Marathon for Hope alive until a cure for cancer is found.
“It’s the Terry Fox Marathon of Hope and the only time I want to see it as the last Terry Fox Marathon of Hope is when the cure is out there,” she said.
Posted by Alex Bain at 4:41 PM