TORONTO — Sprinter Jared Connaughton of New Haven missed gold by a whisker Sunday at the Canadian track and field championships on the weekend.
Connaughton, the defending champion, was beaten by .07 seconds in the 200-metre final.
The silver medal was added to the bronze he won Saturday in the 200 metre.
Another Islander is also bringing home a medal.
Souris native Kurt McCormack claimed a bronze in the triple jump Sunday.
Brian Barnett of Edmonton won both the 100- and 200-metre titles, making him the first male to win both sprints since Nicholas Macrozonaris in 2003.
Barnett won the 200 metres in 20.71 seconds on the wet track at Varsity Stadium, leaning in at the finish to edge Connaughton.
Sam Effah of Calgary was third in 21.02.
Connaughton won the event last year with a championship record and personal best time of 20.34.
In the qualifying races, Connaughton finished first in 20.95, while Effah was second in 21.03 and Barnett was fourth in 21.20.
McCormack also ran in the 200-metre qualifying, finishing 23rd overall in 22.85.
Gerry MacAdam of Charlottetown finished 27th with a clocking of 23.24.
In the triple jump, McCormack had a best jump of 15.02 metres to finish in third place.
He also had other jumps of 14.55, 14.26 and 15.01.
The top-two finishers were Jacob Zorzella (15.14) and Sean Jestadt (15.09).
In the qualifying jumps, McCormack was fourth with a 14.81, behind David St. Bernard (15.29), Jason Goetz (14.88) and Jestadt (14.82).
Saturday, Connaughton finished third in the 100-metre final in 10.462, just edging out Effah for the bronze, who was timed in 10.469.
Barnett won with a time of 10.28 while Hank Palmer of Montreal was second in 10.40.
Connaughton was also third in his semifinal heat in a time of 10.41, finishing behind Palmer (10.33) and Barnett (10.39).
The Islander had Canada’s best 100-metre time of 10.15 last year.
Barnett, Connaughton, Effah, Palmer and Anson Henry are all members of the Canadian 4x100 relay that finished sixth at the Beijing Olympics.
The championships also serve as the qualifying meet for next month’s world championships in Berlin
Only four athletes met the qualifying marks over the four-day event that they needed for the world championships — 100-metre hurdlers Perdita Felicien and Priscilla Lopes-Schliep, Sultana Frizzell in the women’s hammer throw and shot putter Dylan Armstrong.
The men’s and women’s 4x100 relay teams have already qualified.
Athletes have until July 24 to reach their qualifying marks, and Athletics Canada was hoping to send a team of about 30 athletes to the meet. 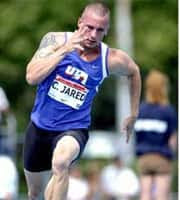 Jared Connaughton of New Haven, P.E.I., missed a gold medal by 0.07 seconds Sunday at the Canadian Track and Field Championships in Toronto.

Connaughton, 23, the country's defending champion in the 200 metres, won silver in the event. He also brought home a bronze in the 100 metres.

Another P.E.I. athlete, Kurt McCormack of Souris, won bronze in the triple jump on Sunday.

Connaughton finished 14th in the 2008 Summer Olympics in the 200 and was a member of the sixth-place Canadian 4x100 sprint relay.

In August, Connaughton heads to the world championships in Berlin as part of the relay team.