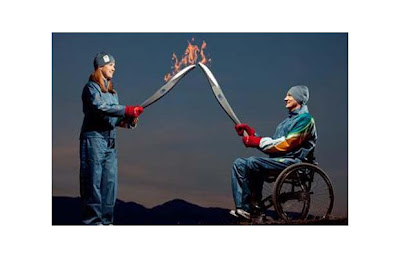 Vancouver, BC — Three days after the Olympic Flame is extinguished on the West Coast, a new flame will light in Ottawa — in the heart of Canada’s national capital — sparking the official start of the 2010 Paralympic Torch Relay on March 3, 2010. The 10-day inspirational journey will illuminate the extraordinary achievements of Paralympians and celebrate the endless possibilities of the human spirit through sharing the message of courage and determination embodied by the flame.

“The Paralympic Games are about celebrating unbelievable athletic performances and triumphing repeatedly over adversity. The flame — and the Paralympic Torch Relay — is a powerful physical reminder of this, of how a dream can spark a personal and emotional transformation in the pursuit of excellence,” said Sir Philip Craven, President of the International Paralympic Committee (IPC), who participated in today’s announcement with a host of dignitaries. “I know in 2010, Canadians will give a warm welcome to the flame wherever it visits, and be great hosts to the world’s finest Paralympians.”

As well, for the first time the Paralympic Torch Relay will have its own unique emblem. The 2010 Paralympic Torch Relay emblem — “Spark Becomes Flame” — shows a human figure with its arms raised and joined, much like a candle’s flame. Contained within the arms is the glow of the fire within everyone, symbolizing the moment when imaginations are ignited and dreams are born. The design was created by Vancouver 2010’s in-house design team.

“We felt it was important for the Paralympic Torch Relay to have its own emblem because of its special ability to shine its own light and reveal amazing stories of courage and perseverance in our communities and at the Games,” said John Furlong, VANOC’s Chief Executive Officer. “To honour the remarkable achievements of Paralympic athletes, we are planning extraordinary relay events that will inspire and garner attention for the Vancouver 2010 Paralympic Winter Games and the Paralympic Movement.”

The March 3 lighting ceremony in Ottawa will have a uniquely Canadian flair; the Paralympic Flame has no ancestral home, hence each Organizing Committee has the freedom to choose a lighting method and celebration significant to the Host Country. The details of the ceremony will be revealed this fall by VANOC, along with the torchbearer selection process and the relay celebration stops en route from Ottawa to Vancouver.

Over 1,300 athletes and officials from more than 40 countries will take part in five sports (alpine and cross-country skiing, ice sledge hockey, wheelchair curling and biathlon) during the 10-day 2010 Paralympic Winter Games in Vancouver and Whistler next March. The big international sporting event comes just 12 days after the region hosts the Olympic Winter Games.

“The Paralympic Torch Relay will bring the spirit of competition and triumph that our Paralympic athletes personify to communities across British Columbia and Canada,” said the Honourable Gordon Campbell, Premier of BC. “We’ve already witnessed how truly incredible these athletes are and how fierce the competition is when we hosted several Paralympic sport events at the 2010 venues earlier this year. British Columbians are excited to host Canada’s first-ever Paralympic Winter Games and to share in seeing the dreams of our athletes come true right here in their home.”

At the news conference today with Sir Philip, VANOC also unveiled the torch and uniform design for the 2010 Paralympic Torch Relay. Brad Lennea of Whistler, BC, a retired member of Canada’sPara-Alpine Ski Team and a Paralympic Torchbearer in Beijing, and fellow skier Karolina Wisniewska of Vancouver, BC, carried the distinctive steel blue torch, inspired by the Canadian winter landscape and the lines etched on ice by winter sports.

The one-metre-long torch, designed by Bombardier, has an ergonomic, curved and modern design and features the emblem of the 2010 Paralympic Winter Games, a red maple leaf air intake cut-out and an engraving of the Games motto With Glowing Hearts/Des plus brillants exploits. It also has robust technology created by Bombardier’s aerospace and transportation design teams to weather the extremes of the Canadian winter. The torch can be operated in temperatures ranging from -50 C to over 40 C, through rain, sleet, snow and wind.

The Paralympic Torchbearer uniform, which seamlessly blends in with the torch design, is steel blue in colour and accented with bright bursts of blue and green on the jacket’s left arm. The uniform, designed and produced by the Hudson’s Bay Company, consists of a jacket, pullover pants, toque and knitted red mittens. The uniform is a commemorative keepsake for torchbearers.

The uniform also features the Vancouver 2010 Paralympic Torch Relay emblem on the chest and the IPC symbol, known as agitos, on the back. Silver reflective elements, including “Vancouver 2010” on the right jacket sleeve and right back pant leg, have been added for prominence and visibility.

Further information on the 2010 Paralympic Torch Relay, including photos of the torch and torchbearer uniforms, is available online at www.vancouver2010.com/torchrelay.