How big is a Marathon? 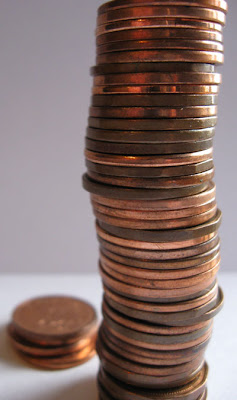 How big is a Marathon?

In the metric world, a full Marathon is 42.195 kilometers. 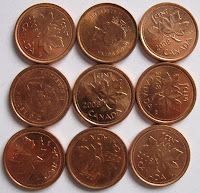 It costs $250,000 to put on and generates twice that amount in economic impact
Participants are coming from:
all of Canada's provinces & territories,
14 States
Germany, England, Denmark & China.

If all the currently registered participants, in all nine events, cross their finish lines, they'll have collectively traveled over 20,500 kilometers 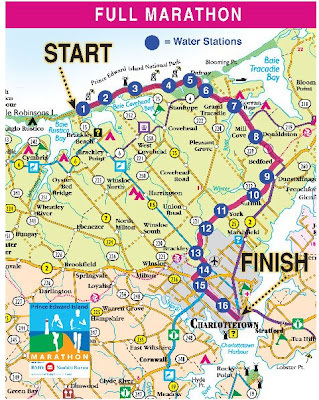 "The Marathon starts at beautiful Brackley Beach in the famous Prince Edward Island National Park on the north shore of Prince Edward Island. The start line is on the west side of the Brackley Beach change facilities, and marathoners proceed to the east along the Gulf Shore Parkway towards Dalvay. The first 4 kilometers are flat (at 2 metres above sea level) and follow the north shore coastline. Marathoners will enjoy views of the famous Prince Edward Island National Park sand dunes and beaches and hear the crash of waves along the north shore. To the south, there will be views of Brackley and Covehead Bays. A breathtaking view of the Stanhope lighthouse and miles of sand dunes and white sandy beaches greet you as you reach the top of the bridge. Deep sea fishing boats are often seen passing under the bridge, accessing the Gulf of St. Lawrence.

Continuing on, you will likely see glimpses of the many foxes that populate the National Park, as the course rises gradually to an elevation of 6 metres above sea level (masl) at the 8 km mark. Just after the 10 km, runners turn south, around Dalvay Lake, with a breathtaking view of Dalvay-by-the-Sea Hotel, originally a home built in 1895 by Alexander McDonald, a wealthy businessman and one time president of Standard Oil Company with John D. Rockefeller.

Marathoners say goodbye to the Prince Edward Island National Park at 12 kilometers and head inland on Highway 6, traveling south into the community of Grand Tracadie. The course climbs to an elevation of approximately 20 masl by the 13.5 km, and then declines to 2 masl, at the 16 km mark. Runners cross the bridge over the Winter River in the community of Corran Ban. Look to the left as you cross the bridge and notice the lines of buoys marking the mussel farming in the Bay. You are also likely to see a number of Great Blue Herons fishing in the Bay. The next 5 km travel inland along Highway 6 toward Mill Cove. This portion of the course runs through rolling agricultural land and into the community of Bedford Station, the halfway point of the Marathon. Elevations climb as high as 34 masl, dropping back to 28 masl at the half-way mark.

At this point runners turn right onto the Confederation Trail (former railway bed converted to Island-wide trail system). The Confederation Trail is a well maintained fine gravel trail - basically flat with some long gradual grades. Over the next 12.5 km, runners will enjoy the quiet scenery and fall colours as they wind their way through mixed forest and agricultural fields.

The first section of trail is 3.8 km in length and takes runners to Suffolk Station. As the runners progress across Highway 222, they pass just south of one of the three well fields (in the Winter River Watershed) that provide the City of Charlottetown with its water. This section of Trail has a gradual grade from 28 masl to 50 masl (at 24.6 km).

Another 3.75 km of trail, takes the runner to Highway 25 in York, a community well known by gardeners worldwide as the home of Veseys Seeds. Look to the left at approximately 26 kilometers to see a farm field full of hundreds of bright orange pumpkins ready to be picked for Halloween. This section is level to slightly downhill, dropping from 50 masl to 40 masl as we cross Highway 25 in York (at approximately 28.5 km).

Continuing on the Confederation Trail another 2.8 km takes us to Union Road, just south of the second well field (Union) that supplies water to the City of Charlottetown, and just north of the Charlottetown Airport. Over this section, elevations drop from 40 masl to 30 masl and then climb again to 37 masl.

The final section of trail is 2.2 km long, taking us to approximately the 34 km mark, where we leave the Confederation Trail and turn left in front of the corporate headquarters of the world's finest cookware, Paderno, heading south onto the paved highway (Higway 15 - Brackley Point Road - Elevation = 50 masl). Runners head south 1.45 km and then turn right on to Sherwood Road (1.6 km) with a quick down hill (56 masl to 28 masl) followed by a climb back up to 38 masl as we head towards the intersection with Highway 2.

A left onto Hwy 2 and the runners are looking straight in to the finish of the marathon (however, its still another 5.5 km!). The portion of the course on Hwy 2 is downhill, across the By-Pass Highway (to 6 masl) and up hill to the point where Hwy 2 joins University Avenue by the Charlottetown Mall (24 masl). Another downhill (to 10 masl) and uphill (to 26 masl) takes us past the University of Prince Edward Island.

We cross Belvedere Avenue and pass the Experimental Farm property on your left. As runners pass the CBC building there is only one mile left. Its down to 1 km when we pass Pond Street.

After crossing Euston Street, runners get a spectacular view of the War Memorial, Province House and the Confederation Centre of the Arts -- and of course the finish line! The streets will be crowded with cheering spectators, but even better, we see the last 350 metres of the marathon, with the grand finish line at the south end of University Avenue."
Posted by jypsy at 10:53 AM