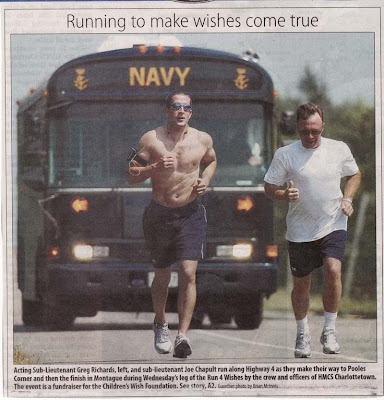 The sun has been beating down and the rolling hills have been hard on aching joints, but the team of sailors running their marathon fundraiser this week are all smiles.
The 23 crew members from the HMCS Charlottetown finished their second day of running Wednesday arriving in Montague in mid-afternoon.
They are almost midway through their seventh Run 4 Wishes campaign, in which the crew runs from one tip of P.E.I. to the other to raise money for the Children’s Wish Foundation.
So far, the team has run approximately 169 kilometres, from North Cape to Summerside on Tuesday and from East Point to Montague Wednesday. But they’re not done yet.
The crew will be up bright and early this morning and on the road again, starting today in Wood Islands, through Pinette, Orwell Corner, Vernon Bridge and Hazelbrook. They will then run across the Hillsborough Bridge and straight through and finishing for the day in West Royalty.
As they pass through each little village, town and community, Islanders have been coming out by the dozen to honk their horns, wave Canadian flags and cheer on the team.
They have also been generous to the fundraiser, dropping money into the oversized boot the sailors use to collect money.
Experiencing this level of support has made the HMCS team ‘extremely proud,’ said Navy Sub-Lieutenant Joe Chaput.
“When they’re running, people are waving to them on the road, cars are stopping, they’re coming up to them and giving them money while they’re on the road and it’s just amazing,” he said.
The hot, sunny days have been great for getting Islanders out to cheer them on, but it’s meant scorching hot temperatures for the team as they run along the pavement. It’s grueling and often painful, but this has not dampened the team’s spirit or energy, Chaput said.
“They’re tired and hot and sweaty and every single step just hurts but you just keep on going but they’re still motivated,” he said.
“You just look at these guys and they’re just beaming. You can tell that their sore but their smiles are still there.”
Each team member takes turns running a 30-minute shift. Then they get on the support bus where they can rest up for the next shift. At the end of the day, the ship’s medic, Warrant Officer Mary Landry, pops their blisters, bandages their joints and administers Tylenol. Then they wake up the next morning and do it all again.
“It’s just absolutely amazing — that’s the word for it, amazing. It just has to be.”
On Thursday, the Sea King helicopters will arrive on P.E.I. to bring awareness to the Run 4 Wishes. It will take up some Children’s Wish families and media and later in the evening will land in the Charlottetown racetrack.