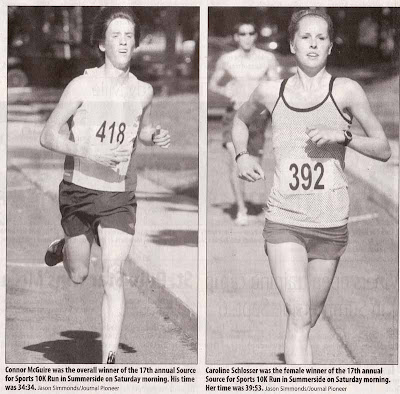 By Jason Simmonds
Sports Editor
SUMMERSIDE — Connor McGuire tuned up for the Canada Summer Games in fine style, and Caroline Schlosser celebrated her 21st birthday by winning the 17th annual Source for Sports 10K Run here Saturday morning.
McGuire, who resides in Wilmot, was the overall winner in 34 minutes 34 seconds (34:34) while Schlosser was the first female to hit the finish line in 39:53, good enough for ninth overall.
“This is my last race before the Canada Games,” said McGuire, who will represent P.E.I. in the 5,000 metres and “possibly” the 1,500 metres.

Nine-second margin
McGuire, who just turned 18, finished nine seconds ahead of Mike MacKinnon, 36, of Miscouche.
“I was with Mike basically until about 9K,” explained McGuire. “We went through the first K in a very quick time and the first 5K was a little faster than we were looking for.
“We were looking for about a 35-minute pace and at the top of the hill (just past 9K) I picked it up a little bit and my last K was very strong.”
McGuire graduated from Three Oaks Senior High School in Summerside in June and will study science (biology) at St. Francis Xavier University in September.
“I’ve actually been training with Mike and doing speed work and different interval sessions,” said McGuire. “I feel really strong for the 5,000 and am looking forward to it.”

Few expectations
Schlosser admitted she entered the race with not “very many” expectations and finished three seconds ahead of the second-finishing female, Rebecca McCarvill, 27.
“It’s a very good course because it’s all pavement that is pretty flat,” said Schlosser.
“There is a slight incline in some spots, but right from the get-go it was very fast.
“There was a lot of wind, which was a problem. I found I was trying to draft off people for a while, hoping they would break the wind for me. . .
“The downhill finish helped along with the fact there wasn’t anyone pressuring me until the very end.
“I had a little relaxation and then a little bit of a kick at the end.”
Schlosser started in the middle of the pack and worked her way to lead the female field.
“At 5K I finally caught up to the two lead females and at 6 1/2 I passed them,” said Schlosser, who grew up in Edmonton, Alta., and is entering her fourth year of commerce at Dalhousie University in Halifax.

Family on P.E.I.
“I have family here and I’m staying with the Carmodys (Dr. Doug and Elspeth) of Summerside),” explained Schlosser.
“I’ve always had family on the Island and my aunt and uncle, the Burnetts (Rob and Diane), are from Charlottetown and they run the races every once in a while.
“They kind of got me hooked on the P.E.I. road running club since I was a little bit younger.”

The 17th annual Source for Sports 10K Run:
A total of 91 runners registered for the race and 87 finished.

All proceeds from the race will be donated to the Children’s Wish Foundation.