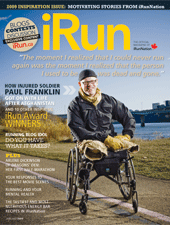 At the age of 20, PEI native Alex Bain’s unwavering dedication to running already sets him apart from most of his peers. Bain races almost every weekend. He has broken the 20-minute mark in the 5k and is very close to breaking 40 minutes in the 10k. He just completed his first full marathon in an impressive time of 3:29:29.

But his age isn’t the only thing that’s special about Bain; he was diagnosed as autistic at the age of three. Today, a huge part of Alex’s motivation each time he laces up his shoes is to promote awareness about autism – and the fact that he, and many others like him, wish for acceptance, not a cure. “Autism makes me different from my friends,” says Bain. “That’s OK.” As his trademark yellow race t-shirt spells out, Bain is “Running For Autism, Not Against It.”

In July 2006, Alex (accompanied by his mother, Janet Norman-Bain, who played both support crew and videographer) embarked on a run from tip-to-tip of PEI to raise money for autism awareness and risk and safety management. But even this challenge – he averaged between 20-25k per day – didn’t quite prepare him for what the last stretch of his marathon would feel like: Bain admits he hit the wall with 10k to go, “the first time I’ve done three hours of running.” Still, he exceeded his projected time goal by more than five minutes.

Thank you, whoever nominated him, they didn't tell me who you are.

I've known about this for a while now but Alex only learned about it just now when I saw it had shown up up their website and showed him. They will be sending him a copy of the magazine since we are without a Running Room or Runner's Den here (you can pick up a free copy at any Running Room or subscribe here).

Thanks too Jessica Aldred, Associate Editor, for so nicely capturing the essence of Alex in the bio she wrote.

"I like to thanks to Stanley Chaisson for training me, Chris Brake for inspiring me, my mom for drives to races and all members from PEI Road Runner Club. Special Thanks for Dianne and Elaine for big hugs." Alex

Most excellent! Congratulations to Alex, long may he run.

Wonderful! Congratulations, Ales, and thanks for all the autism-advocacy you do. :-)

You are "AWESOME" Alex

w00t!
Yea, Alex!
As Dave said, long may you run; and as Jane said (with a Michelle Dawson-inspired change in terminology (but I am sure not in meaning)), thanks for all the autistic advocacy you do!

Alex! How wonder and fantastic! Congratulations and thank you for being an inspiration to other autistics. I am sharing your blog with my son.

Congratulations Alex! What a great honor. You're a fantastic athlete.

What a fantastic achievement--to add to all the other ones...

Big contratulations and thanks to Alex for all you do.

"As his trademark yellow race t-shirt spells out, Bain is “Running For Autism, Not Against It.”

What a great thing you do Alex!
Congratulations.

Congratulations Alex, that's some impressive running. And thanks as well for advocating FOR autistics. =]

Congratulations, Alex! Thank you for working to make the world a better place for all of us. Your hard work and dedication are appreciated!!

You and your family help us to see Autism with different eyes. You have a lot of heart to work as hard as you do, and a lot of talent. Thanks for letting us share in your successes.

Can't say how inspired we are! Run on, Alex!

In the world, there are those who talk, and there are those that translate that talk into action. Both are necessary, but action, as you have found, usually yields faster and more widespread results.

Thank you, Alex, for your continued efforts that show people a positive image of autism.

Well done Alex. I used to be a runner. Now I advocate for autism. It is great that you have found a way to combine the two.

Congratulations, Alex! And thank you for running FOR autism. For putting a positive face out there for the world to see.

You are an awesome and inspiring young man. I know your mother is proud, too. :-)

Wonderful, and congratulations Alex! This award was well-earned!