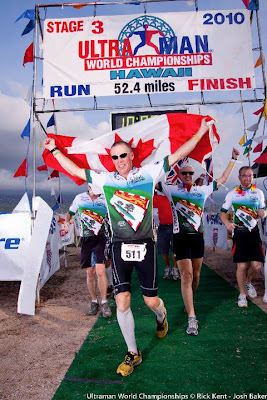 Stage I – 6.2-mile (10 km) ocean swim from Kailua Bay to Keauhou Bay, followed by a 90-mile (145 km) cross-country bike ride from Keauhou Bay around the southern tip of the island via Route 11 to finish at Namakani Paio Park in the Volcanoes National Park. Vertical climbs total 7,600 feet.

Stage II – 171.4-mi (276 km) bike ride, from Volcanoes National Park (Route 11) to Keaau, then turning east with a counter-clockwise loop through Kalapana, Kapoho and Pahoa, then on through the City of Hilo. From Hilo, the route continues north along the Hamakua Coast (Route 19) to Waimea, and over the Kohala Mountains via Route 250 to finish at the Kohala Village Inn on Hawi Road, just above its junction with Route 270. Vertical climbs total 8,600 feet.

Stage III – 52.4-mile (84 km) double-marathon run from Hawi to Kawaihae (Route 270), then on to Kailua-Kona (via Route 19) and finishing on the beach at the Old Airport State Park.

Sunday, Dalton ran a double marathon in a time of 10:08.53 – the 26th fastest. That put him in 32nd place overall with a combined time of 33:11:31. His finish time was five minutes and 44 seconds faster than the numbers he put up in the Ultraman Canada race in British Columbia last July.