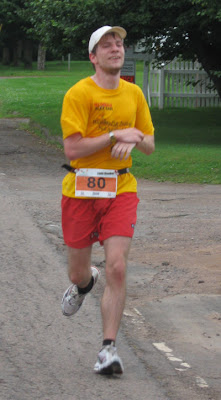 It was cloudy and 20 degrees.

The Dunk River Run on the 7.22 miles loop course on Freetown and Dunk River.

Alex Coffin won the race for the 3rd time and Jennifer Perry for the top female.

More Photos (sorry there aren't more, we left when Alex finished to return to volunteering at the Canadian Junior Track & Field Championships)

CENTRAL BEDEQUE — Alex Coffin and Jennifer Perry repeated as winners of the 32nd annual Callbeck's Home Hardware Dunk River Run Sunday.
Coffin was the race’s overall winner in 40 minutes, 18 seconds while Perry was the top female runner, finishing 13th overall in 50:13.
“My whole strategy was to run a very fast first 5K,” said Coffin, 40.
Coffin jumped out to an early lead and 18-year-old Connor McGuire of Summerside stayed with him for about the first two miles.
“I watched him (McGuire) run at the Canadian juniors (Saturday in Charlottetown), and I knew he was running back-to-back races,” said Coffin, explaining his reason for a fast start. “I figured I’d take it out quick and it’s tough to run back-to-back. I figured that was the right strategy today.”
Mike MacKinnon finished second overall in 41:37, McGuire was third in 43:07, Scott Clark came fourth in 43:09 and David Gallant rounded out the top five in 44:44.
Coffin is from Saint John, N.B., but his wife, Connie (Perry) Coffin, is originally from St. Nicholas. He has become a familiar face at P.E.I. races over the years.
Hannah Walker, 19, was the second female to finish behind Perry in 52:54 and 21st overall.
Perry, 32, led the female field from the start of the race.
“I found the pace very fast at the beginning,” said Perry, who resides in Greenmount. “I haven’t done a lot of hill training and I anticipated the hills to keep my pace steady.”
Perry added she doesn’t find the 7.25-mile course that begins and ends in front of the Bedeque Area Recreation Centre all that hilly.
A total of 64 runners participated. 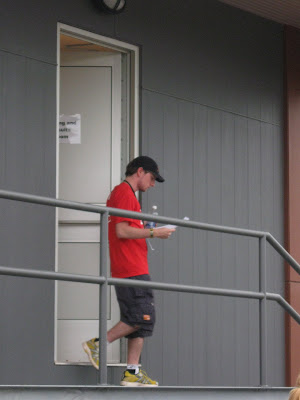 At Canadian Jr. Track and Field Championships I working at results and timing.

I take the results from result room to Technical Information Centre.

At the TIC they photo copy the result post them.

I watching the steeplechase race, 200 metre dash and relays when were not working.

I saw lot from where i work.

It was a good time.

My mom worked at shot put, high jump and javelin.

Running For Autism
Not Against It
acceptance, inclusion, awareness
Posted by jypsy at 8:18 AM