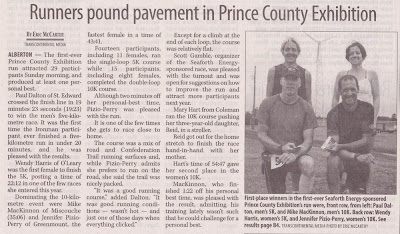 Paul Dalton of St. Edward crossed the finish line in 19 minutes 23 seconds (19:23) to win the men's five-kilometre race. It was the first time the Ironman participant ever finished a five-kilometre run in under 20 minutes, and he was pleased with the results.

Wendy Harris of O'Leary was the first female to finish the 5K, posting a time of 22:12 in one of the few races she entered this year.

Dominating the 10-kilometre event were Mike MacKinnon of Miscouche (35:06) and Jennifer Pizio-Perry of Greenmount, the fastest female in a time of 43:41.

Although two minutes off her personal-best time, Pizio-Perry was pleased with the run. It is one of the few times she gets to race close to home.

The course was a mix of road and Confederation Trail running surfaces and, while Pizio-Perry admits she prefers to run on the road, she said the trail was nicely packed.

Except for a climb at the end of each loop, the course was relatively flat.

Scott Gamble, organizer of the Seaforth Energy-sponsored race, was pleased with the turnout and was open for suggestions on how to improve the run and attract more participants next year.

Mary Hart from Coleman ran the 10K course pushing her three-year-old daughter, Reid, in a stroller. Reid got out for the home stretch to finish the race hand-in-hand with her mother. Hart's time of 54:47 gave her second place in the women's 10K.

MacKinnon, who finished 1:22 off his personal best time, was pleased with the result, admitting his training lately wasn't such that he could challenge for a personal best.

MacKinnon noted the race attracted numerous local runners, people he doesn't see in many of the other races he enters. He was happy with the first-year event and with the number of participants it attracted.