Nova Scotia nurse Erin Poirier, who is the daughter of Edwin and Theresa Callaghan of Charlottetown, is in full training mode
for her 17-day run across Gambia in Africa to raise funds for the Nova Scotia Gambia Association. 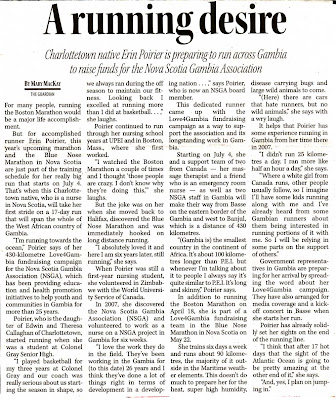 For many people, running the Boston Marathon would be a major life accomplishment.

But for accomplished runner Erin Poirier, this year’s upcoming marathon and the Blue Nose Marathon in Nova Scotia are just part of the training schedule for her really big run that starts on July 4. That’s when this Charlottetown native, who is a nurse in Nova Scotia, will take her first stride on a 17-day run that will span the whole of the West African country of Gambia.

“I’m running towards the ocean,” Poirier says of her 430-kilometre Love4Gambia fundraising campaign for the Nova Scotia Gambia Association (NSGA), which has been providing education and health promotion initiatives to help youth and communities in Gambia for more than 25 years.

Poirier, who is the daughter of Edwin and Theresa Callaghan of Charlottetown, started running when she was a student at Colonel Gray Senior High.

“I played basketball for my three years at Colonel Gray and our coach was really serious about us starting the season in shape, so we always ran during the off season to maintain our fitness. Looking back I excelled at running more than I did at basketball. . . ,” she laughs.

Poirier continued to run through her nursing school years at UPEI and in Boston, Mass., where she first worked.

“I watched the Boston Marathon a couple of times and I thought ‘those people are crazy. I don’t know why they’re doing this,’” she laughs.

But the joke was on her when she moved back to Halifax, discovered the Blue Nose Marathon and was immediately hooked on long distance running.

“I absolutely loved it and here I am six years later, still running,” she says.

When Poirier was still a first-year nursing student, she volunteered in Zimbabwe with the World University Service of Canada.

In 2007, she discovered the Nova Scotia Gambia Association (NSGA) and volunteered to work as a nurse on a NSGA project in Gambia for six weeks.

“I love the work they do in the field. They’ve been working in the Gambia for (to this date) 26 years and I think they’ve done a lot of things right in terms of development in a developing nation . . . ,” says Poirier, who is now an NSGA board member.

This dedicated runner came up with the Love4Gambia fundraising campaign as a way to support the association and its longstanding work in Gambia.

Starting on July 4, she and a support team of two from Canada — her massage therapist and a friend who is an emergency room nurse — as well as two NSGA staff in Gambia will make their way from Basse on the eastern border of the Gambia and west to Banjul, which is a distance of 430 kilometres.

“(Gambia is) the smallest country in the continent of Africa. It’s about 100 kilometres longer than P.E.I. but whenever I’m talking about it to people I always say it’s quite similar to P.E.I. It’s long and skinny,” Poirier says.

In addition to running the Boston Marathon on April 18, she is part of a Love4Gambia fundraising team in the Blue Nose Marathon in Nova Scotia on May 22.

She trains six days a week and runs about 90 kilometres, the majority of it outside in the Maritime weather elements. This doesn’t do much to prepare her for the heat, super high humidity, disease carrying bugs and large wild animals to come.

“(Here) there are cars that hate runners, but no wild animals,” she says with a wry laugh.

It helps that Poirier has some experience running in Gambia from her time there in 2007.

“Where a white girl from Canada runs, other people usually follow, so I imagine I’ll have some kids running along with me and I’ve already heard from some Gambian runners about them being interested in running portions of it with me. So I will be relying in some parts on the support of others.”

Government representatives in Gambia are preparing for her arrival by spreading the word about her Love4Gambia campaign. They have also arranged for media coverage and a kick-off concert in Basse when she starts her run.

Poirier has already solidly set her sights on the end of the running line.

“I think that after 17 hot days that the sight of the Atlantic Ocean is going to be pretty amazing at the other end of it,” she says.

Are you running the Bluenose Marathon in Halifax this year?

If so, click on the poster below and consider joining the Love4Gambia Charity Team 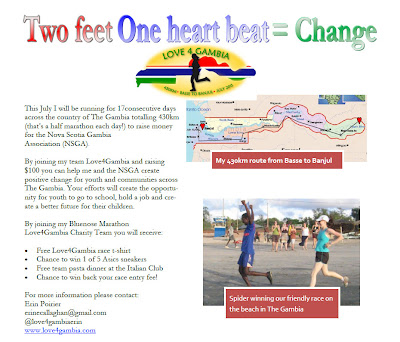 It was a pleasure to meet Erin at the Freeze Your Gizzard in Montague last month. Erin's shoes caught many eyes. 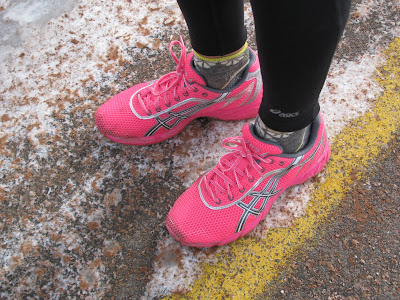 Erin, we wish you all the very best on your Gambian Run.
We hope you can conjure up some memories of freezing your gizzard to help cool you down when you're out there under the 37 degree Zambian sun. Have a happy, healthy & safe adventure.

We'll be following Erin and you can too....

Please consider donating to Erin's Love4Gambia Run
and support the Nova Scotia-Gambia Association's excellent work
through CanadaHelps HERE
Posted by jypsy at 9:36 AM

Dear Alex and Jypsy, thank you so much for posting this and for your very kind words. I really liked meeting you too. What a great suggestion to think of Freezing my Gizzard during the African heat this summer! I'll see you next at Cabot Trail Relay if you are there-my pink shoes will be easy to spot :) Erin

Hi Erin,
Alex is running Leg #2 for Team PEI. What leg are you running & what team are you on?

I am on team Run Forrest Run. We haven't chosen our legs yet- I'm hoping for leg 7 or 8. Will let you know!