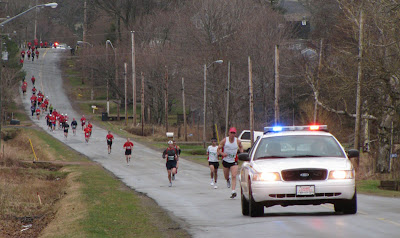 It was sun and cloud and very windy and 12 degrees.

The half marathon started at Pownal and finish at armories. Leo McCosham won the race and Shelley Simmons-MacLeod for the top female.

Billy MacDonald won the 10km race and Jennifer Perry for the top female.

Aaron Pottelberg won the 5km race and Laura Smith for the top female.

The course was on the Pownal Rd and Keppoch Rd along the shoreline is very nice.

POWNAL - Leo McCosham of Charlottetown and Shelley Simmons-MacLeod of Summerside were the top male and female runners in the half marathon of the Wear Red road races Saturday.
The races also included 5- and 10-kilometre events.
McCosham finished first overall in a time of one hour 19 minutes 30 seconds (1:19:30). Chuck Dixon of Sackville, N.B., was second in 1:23:07, and Steven Baglole of Charlottetown was third in 1:25:01.
Simmons-MacLeod, who finished 13th overall out of 50 runners, stopped the clock in 1:41:20. Sandi Carson-McGuire of Summerside was the second-finishing female, 15th overall, in 1:43:13, and Brenda Benson of Summerside was 16th overall in 1:43:19.

10K
In the 10-kilometre race, Billy MacDonald of Charlottetown was the first runner to hit the finish line in 38:55. Jennifer Perry of Tignish was the top-finishing female in 45:14. Perry was fourth overall in the 31-runner field.
Aaron Pottleberg of Shearwater, N.S., won the 5-kilometre race with a time of 21:05. Laura Smith of Stratford was the top female runner, and was second overall with a time of 21:34. A total of 40 runners participated.
The Wear Red road races, sponsored by Mark's Work Wearhouse, are a fundraiser for the P.E.I. Military Family Services Centre.