Coke has a webpage
"Meet The Torchbearers"
at http://www.icoke.ca/liveolympic/shinealight?map=torch_bearer 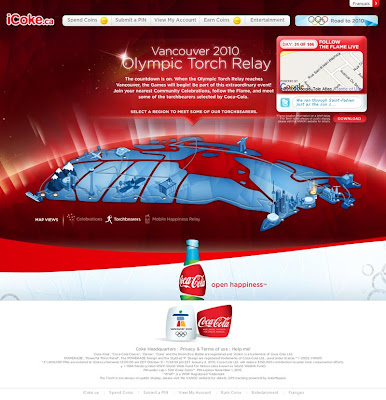 If you click by the little Lighthouse on Prince Edward Island,
you can read an edited version of the essay Alex wrote
that won him his spot with Coke as an Olympic Torchbearer: 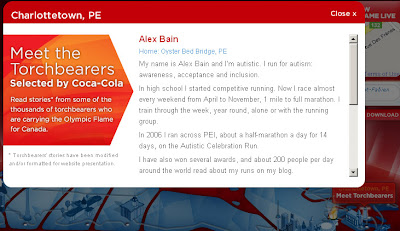 Lately, far more than "about 200 people per day" have been visiting
this blog. So far this month, there have been over 10,600 visitors.
The graph below shows the week surrounding his Sunday Torch Run.

1,023 visitors checked out this blog the day of Alex's Olympic Torch Run.

On another Coke page, "Meet Some of our Torchbearers" at the Coke Newsroom,
on the November 22nd page
http://cokenews.ca/torch-relay/meet-the-torchbearers/november-22nd/

Alex Bain is autistic, he runs for autism awareness, acceptance and inclusion. Bain has always been active and particularly interested in running. He joined the track and field and cross country teams at school and the RoadRunners Club in P.E.I. He trains through the week, year round, alone and with a group.

In 2006, Bain ran a half marathon a day all across P.E.I. on the Autistic Celebration Run to raise awareness and train law enforcement and first responders in autism recognition and response. Bain has begun mentoring an autistic student with running and typing. He reports his runs on his blog; Runman. Bain carries the torch to celebrate active and diverse Canadians.

You can see who the Coke Torchbearers are at
http://www.icoke.ca/liveolympic/torchbearer-winners

You can see who the RBC Torchbearers are at
http://www.carrythetorch.com/search-by-map.html
(you can also search by 'name' or 'date')