It was cloudy and rain and 14 degrees.
The Run For The Cure at Charlottetown Waterfront.
The out and back course on Old Charlottetown and Victoria Park. 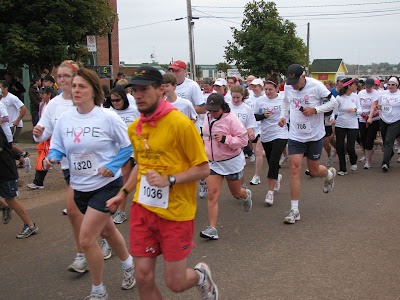 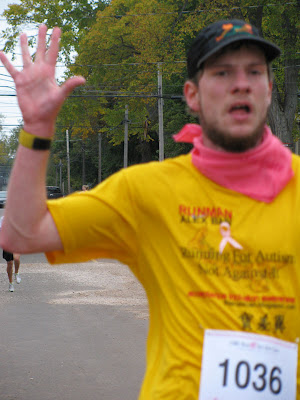 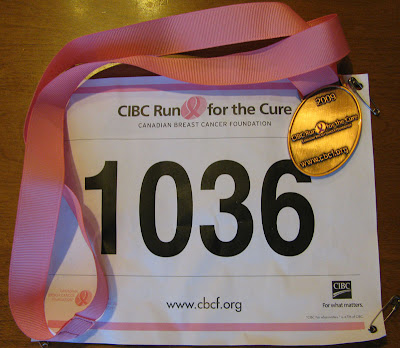 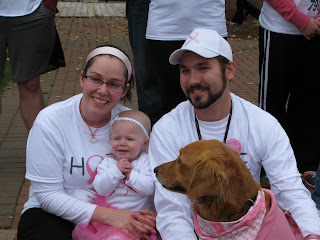 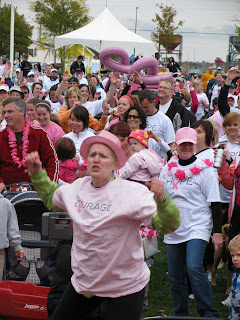 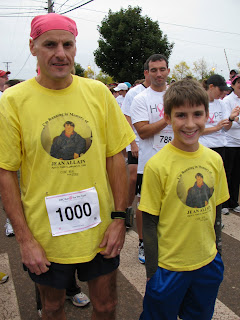 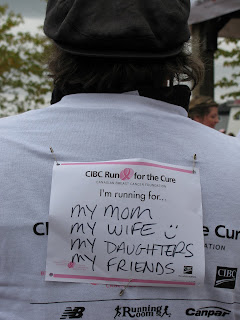 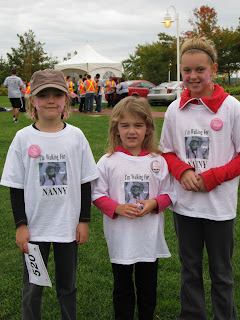 Survivor walks from the heart


Cancer has struck Belinda Montigny and many of her family members.
Yet when the breast cancer survivor took part Sunday in the CIBC Run for the Cure in Charlottetown, her heart went out to a total stranger.
“Probably the most touching thing for me, I was walking beside a young boy and on the back of his shirt it said ‘I’m walking for my mom,’’’ she said.
“So it touches so many people . . . God bless the children that have to deal with it.’’
Montigny, 57, of Stratford took part in her first Run for the Cure in 2008. She was diagnosed with breast cancer in July 2007 — just one day after she buried her sister, who had lost her battle with lung cancer.
She says her sister’s joy for life that extended to dealing with cancer in such a positive fashion helped in Montigny’s own journey with breast cancer that included radiation treatment, chemotherapy and finally a mastectomy before she was rid of the disease.
Her husband Roger, who sadly is currently battling cancer, provided nothing short of wonderful support to help Montigny through her breast cancer.
“He cared for me with such attention during my disease,’’ she said.
“He was there for every chemo treatment that I had and he sat through the mornings that we were there . . . I couldn’t have made it through without him.’’
Montigny is determined to support her husband with the same high level of love and compassion. She also plans to remain active with the Breast Cancer Support Group that she teamed up with Sunday to complete the five-kilometre walk and later man the survival table.
“There has been a lot of members of my family that have passed away from cancer so I hold them close in my heart whenever I do anything in support of cancer,’’ she said.
“I feel that since I have been touched with it that it is a cause that is close to my heart and I want to contribute every year that I can.’’
Cecil Villard, who organized this year’s Run for the Cure in Charlottetown, says the event is enjoying great momentum as people learn a lot more about the cause for the fundraiser: the largest single-day, volunteer-led event to support breast cancer research in Canada.
“More and more people are aware of people that have been touched by breast cancer and survivors are coming out in big numbers,’’ said Villard.
“And, of course, when they come out they’re bringing their families and their friends with them.’’
The number of teams dropped Sunday from last year but the total number of participants was still on par with the approximately 1,500 walkers and runners that laced up in 2008.
The $191,000 raised Sunday is expected to top $200,000 just like last year once all the money trickles in, says Villard.
“Overall, when you consider the weather it’s been an extraordinary day and I couldn’t be more pleased,’’ said Villard.
Stacey McWilliams of O’Leary was the top fundraiser with a tally of $6,460.
Steve Bruce of Charlottetown won the race in a time of 19 minutes and 35 seconds, followed by Jonathan Ross of Charlottetown (20:18) and Alex Bain of Oyster Bed Bridge (20:32). The top female finisher was Jennifer Perry of Greenmount in 20 minutes and 52 seconds. Tressa Lloyd of Charlottetown (21:38) and Nichole Aten (22:54) finished second and third respectively.
Patsy Beattie Huggan of Charlottetown posted the best time by a survivor at 30 minutes and 34 seconds.