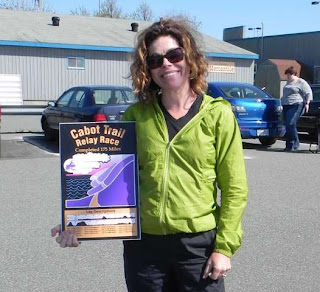 Kim Bailey of Souris was four minutes from the finish line at the Boston Marathon this afternoon when the runners ahead of her came to a standstill.

“The crowd was really loud I had my earphones in, I couldn’t hear anything except the roar of the crowd and my music and I didn’t know what was going on but the crowd just stopped in front of me,” she said.

“I couldn’t understand what was going on, I thought someone had fallen or passed out.

“I was around the corner from the finish line. I didn’t see anything except for the pandemonium and people looking for loved ones.“

Then she said she got “dribs and drabs” of information that there were explosions.

Reports say two are dead and over 90 are injured in Boston after two explosions detonated at the Boston Marathon at 2:45pm on Monday.

“Some were saying bombs, a majority or people were saying it must of been electrical or a gas leak because Boston is an old town,” she said.

“We were there for about an hour. We couldn’t move. Police cars were going and fire trucks. It was zoo. A lot of people were crying and cell phones were down.”

In her time being stuck in the crowd, she said she also saw compassion.

“What I saw was real beautiful acts of kindness by bystanders, giving coats and food out and water, just making sure that people were warm. There were some runners down because they were cold and dehydrated, and people were covering them up.”

Ms Bailey said she is in shock.

“There’s just a bunch of people walking around in shock that this happened at a marathon, a family oriented event with mothers and fathers and babies,” Ms Bailey said breaking down crying. “It makes ... it makes no sense ... at a run that fundraises for charity.

“I would just never think this would happen at a marathon and I wonder what is wrong with the world, what is wrong with people when they start targeting events like this that are just so wholesome and meaningful to people and communities they raise money for.”

Mr Bailey said the subways are down, so she walked for an hour and is now at a lobby of the hotel with her husband.

“I have to find my belongings. Everything is all messed up. I left a bag of clothes on one of the marathon buses and there’s just a lot of pandemonium as you can imagine. I was planning on heading home tomorrow.”

According to the PEI Road Runner’s Facebook page, all Island runners are safe.
Posted by jypsy at 7:12 AM