Runman meets The Man In Motion 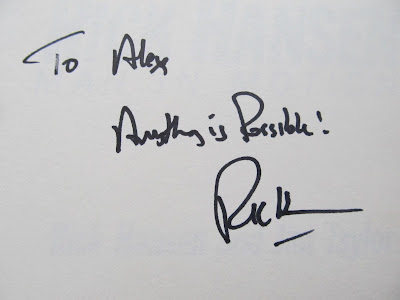 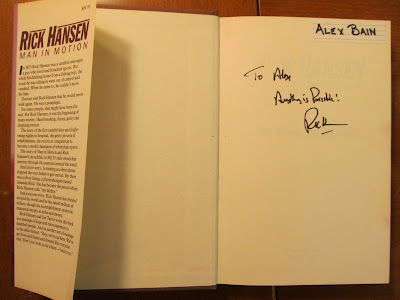 I meet Rick Hansen "Man in Motion". He autographed my book about him. 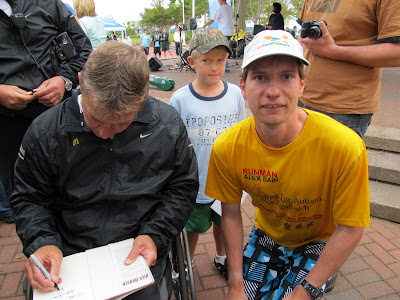 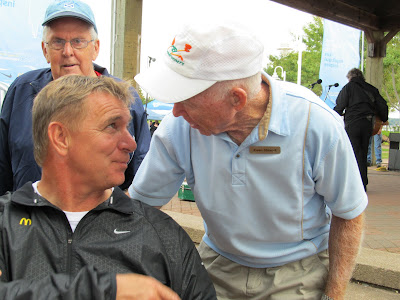 Rick Hansen greets Alex Bain who holds a book about Hansen during an event at Confederation Landing Park in Charlottetown Thursday. Hansen is on a cross-Canada 25th anniversary tour of Canada, reinvigorating his Man In Motion World Tour of 1986.

Clifford Doucette was fully able bodied when Rick Hansen passed through his neck of the woods some 25 years ago.

Unfortunately, Doucette was unable due to work to see Hansen wheel through Saint John, N.B. in 1986 as part of the legendary Man in Motion Tour.

He wasn’t going to miss the opportunity Thursday.

“Hopefully, I can shake his hand,’’ Doucette, 68, of Cornwall said as he joined hundreds of other enthusiastic well wishers gathered at Confederation Landing Park for a community celebration with Hansen hosted by the City of Charlottetown.

And having spent the past three years in a wheelchair following a stroke, Doucette views with even greater awe Hansen’s incredible journey around the globe wheeling through 34 countries in 26 months to raise money and awareness for spinal cord injury research.

“It shows his great determination...and he’s committed to the cause and that makes him a special individual, I think.’’

Noting the couple has a 40-year-old niece who has always needed a wheelchair for mobility, Doucette’s wife Jeanie is not short on praise for Hansen either.

“He’s a fabulous person and has done so much for spinal cord research and for the access of people in wheelchairs,’’ she said.

Welcomed with hoots of delight and loud applause, Hansen urged the crowd to continue to work towards changing attitudes and removing barriers.

He reiterated that the Rick Hansen 25th Anniversary Relay that has been running through P.E.I. the past couple days is all about celebrating the inspirational contributions of so many Canadians.

The relay is making its way across the country with 7,000 Canadians who have made a difference in the lives of others retracing the original Man In Motion Tour.

Kurtis Kelly, 22, of Charlottetown was one of the 31 medal bearers covering the capital city leg Thursday.

“It was inspiring - just great seeing so many people come together,’’ said Kelly, who is learning to walk with a prosthesis.

Kourtney Kelly, who pushed her brother along as a fellow medal bearer, says the day was “amazing’’ for Kurtis.

Meeting Hansen was certainly the icing on the cake.

“It’s a great pleasure to have been able to meet someone who has inspired millions of people,’’ said Kurtis. 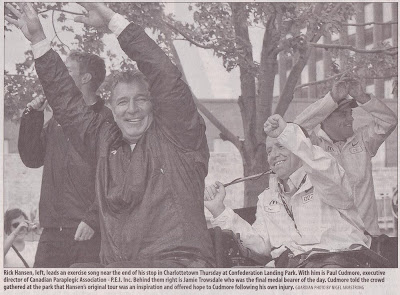