One Step Ahead - P.E.I. runner refuses to let autism keep him from competing 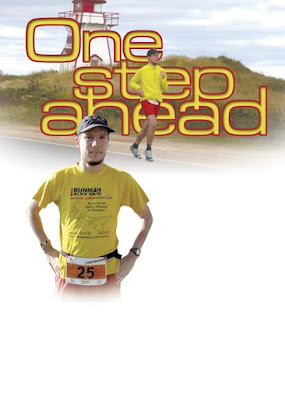 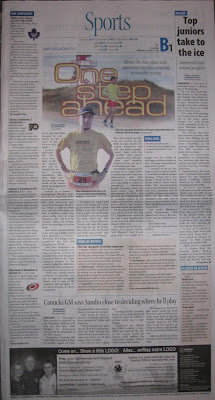 Don’t pity Alex Bain because he can barely tie the laces of his running shoes.
In fact, don’t pity the 20-year-old Bain at all. He doesn’t feel any for himself; he’s too busy running marathons — 5Ks, 10Ks, 42Ks, anything to stay one step ahead of the autism which has dogged him for 17 years.
Autism is a brain development disorder characterized by impaired social interaction and communication, and restricted and repetitive behaviour, all starting before a child is three years old. One of its effects on Bain is limiting certain fine motor skills, such as tying shoelaces. Just last year he stopped asking his mother, Janet Norman-Bain, to tether them.
But autism was far behind in his 45th-place finish at the P.E.I. Marathon is October. The Oyster Bed Bridge native completed his first full marathon in 3:29:29.
And iRun Magazine, an Ottawa-based Canadian running periodical, noticed. It included Bain in its inaugural 12-person list of the most inspiring runners in the country. Called the 2009 iRun Awards, the roll is featured in the magazine’s January issue.
There isn’t a flashy award ceremony or inscribed trophy or engraved mahogany plaque, just a copy of the magazine. But for Bain, it’s not about rewards, it’s about acceptance.
“It makes me happy and proud. The people saw I am a good runner and did a good thing. I hope this award will help me get to be an Olympic torchbearer and more people will learn about me,” said Bain in an e-mail interview. “People will read the magazine and see me on (television) and in the newspaper and learn that people with autism can do lot of things.”
iRun also noticed his tip-to-tip run of P.E.I. in July 2006 to raise money for autism awareness and risk and safety management. Bain, with his mother (who played support crew, videographer and shoelace binder) in tow, ran up to 25 kilometres per day.
The $6,000 raised paid for seminars by an expert (Dennis Debbaudt) who trains law enforcement and first responders in recognizing and responding to autism in emergency situations, bought training videos for every police and RCMP detachment in P.E.I. and placed a card explaining how to recognize autism in the wallets of Island law enforcement officers, first responders and school-age autistics.
On the pavement, Bain has won other awards like the P.E.I. RoadRunners rookie of the year, junior RoadRunner of the year and inspirational runner of the year.
It’s further proof the condition isn’t a barrier for the 2005 Bluefield High School grad. And it just might be a bridge over the chasm of challenges autism presents, a span he began navigating in elementary school.
“I wanted to be on the cross-country team in Grade 4,” said Bain of why he started running. “There are a few people I heard of that run. (Saint John’s) Chris Brake holds (the second-fastest) course record in the Fredericton, N.B., marathon (2:41:40 in 2005). At least two autistics were in the New York Marathon this year. Not so many on sports teams, (but) I don’t think there are physical limitations.”
Just pesky shoelaces, which occasionally come untied such as in a five-kilometre race in Charlottetown in June.
Bain didn’t stop.
He posted a personal best (19:07).

creid@theguardian.pe.ca.
-------------------------------------
This article is fairly factually accurate. There are a couple of issues.... readers here will know that Alex is now 21, I also question the journalist's qualification of Chris Brake's course record and of course Alex has been autistic all his life, not just since the day he was diagnosed, etc. My comments here are not to pick this article apart but to say:
If you are reading the *newspaper* version (not the web version)
Please ignore the orange "Signs of Autism" box - it is full of garbage and inaccuracies posing as facts. Accurate information is VERY IMPORTANT. Spreading this kind of misinformation can be harmful to autistics and is NOT what Alex and I are about when we strive to spread autism awareness. I was not asked to provide a source for autism info for this article and had no idea one, especially this one, would be included. Instead, please read:

What we'd like you to know about Autism
Autism is a neurological difference classified as a developmental disability. Autistic people have atypical behaviours in three areas: social interaction, communication, and restricted interests or repetitive behaviours. Autistics are different at the most basic level available: how they experience the world, and how they learn from it. Autism presents with measurable differences in perception, attention, memory, intelligence, etc. The autistic order and progress of development is different from the typical version as is autistic brain structure, allocation, and function. Autism presents strengths not available to the typical population, but the different pattern of strengths and weaknesses characterizing autism results in many difficulties as atypical needs and adaptive but atypical autistic behaviours are at odds with what is considered or expected as "normal".

Autism isn't a disease, or a bunch of behaviours, any more than femaleness is. Autism involves neurological differences, which are basic and comprehensive. Autistic neurology is no more or less valid than non-autistic neurology: both autistics and non-autistics are able to develop, learn, progress, and achieve things, but may do so in different ways and may require different kinds of help along the way.

Progress is part of the natural course of development in autistics, as it is in non-autistics, but development in autism may not proceed in the same order as is considered normal for non-autistics. Autistics may, e.g., seem advanced in some areas and delayed in others. Seen in perspective, this means that in comparison with autistics, non-autistics are likely to be advanced in some areas and delayed in others. Non-autistics may need a great deal of assistance in learning things that autistics learn easily, and the reverse may also be true. Seeing as we don't declare non-autistics to be "succeeding in treatment" or "less severely non-autistic" or "recovered" when they develop and learn, it should be clear that describing autistics in these kinds of terms is misleading and prejudicial.

Nice article on the whole. Could take issue with the 'dogged by autism for 17 years" I suppposed if you took a very negative view of 'dogged'.

Are you planning on writing a letter to the editor regarding the misinformation in the "Signs of Autism" sidebar?

Yes, please do write a letter! Actually, enclose that last part of this post--the "what we'd like you to know" part.

The article is surprisingly well done, but it shows an obviously low amount of experience with autism or disability in general... the reporter could really benefit from hanging out with a few autistic people!

I have, for now, left a comment on the Guardian's website with the article. I'll try to get a letter to the Editor written that's short enough to meet their guidelines but still says what needs to be said.

I was hoping Mr. Reid would reply to my question about why he had qualified Alex's statement about Chris Brake. Mr. Reid has not replied to my Dec. 17th email.

I asked Mr. Reid "But do tell..... who holds the course record for the marathon in Fredericton? Alex says it's Chris Brake, you say he's only 2nd fastest."

I also told Mr. Reid in an email before the article was printed "He knows stuff, and the sports stats he could rattle off to you would make your head spin."

I'm still rather mystified as to why Mr. Reid publicly doubted Alex and who he thinks holds the course record in Fredericton.

Alex isn't right 100% of the time. If you ask him something he's likely to give you his best answer, even if he knows it's wrong. He knows you want an answer and he aims to please. However, if he gives you a stat without you asking, you could pretty safely put money on it being accurate.

And while I'm being accurate... Alex turned 21 December 15th. He doesn't run to stay one step ahead of autism, he takes his autism with him every step of the way, autism that's been with him every single day of his 21 years. I still tie his laces when he races (and double knot them) but he does now tie them on his non-race shoes. (He also needed help pinning his bib on until Dianne & Elaine got him a bib belt in Boston last spring).