Charlottetown Run for the Cure 2012 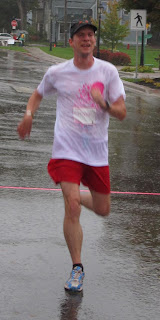 It was cloud and rain and 19 degrees.

I won the race in 20:25 and Pam Campbell for the top female.

I raise $190. Thank you to everyone who donated! 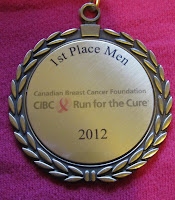 Do to mother nature yesterday we were not able to have a proper closing ceremonies and people are axiously awaiting the results of the day...with money still rolling in here are our Run Day Totals!

Please Share this post often, we want to make sure everyone knows about these hard working individuals!!

The Run for the Cure was full of survival stories that inspired hundreds of runners.

Four years ago, a healthy Diane Nabuurs used to run in honour of her family members who were struck by cancer.Then her life changed.

"I knew I had to beat it. And I never looked back," said Nabuurs, a breast cancer survivor. "I had a big task ahead of me."

Nabuurs beat her cancer with the help and guidance of her aunt Genevieve and mother-in-law Nancy, both breast cancer survivors.

"It made a common thread for us," said Genevieve Ryder. "We're able to talk about the positive things and how grateful we are to be here today."

The money raised by the runners and walkers will fund cancer programs close to home.

"It's really important that a person who is going through treatment and going through everything that a breast cancer patient goes through has the support locally," said run organizer Melissa MacDonald.

Diane Nabuurs says being able to have treatment on Prince Edward Island, close to family, is a big part of why she's healthy today.

"Family support, community support, it all plays such an important part in our whole healing process," said Nabuurs.

Islanders raise more than $162,000 in Run for the Cure
Published on September 30, 2012
Cassandra Bernard  RSS Feed

Hundreds of people listened to touching music and speeches at the 21st annual CIBC Run for the Cure at Confederation Landing in Charlottetown on Sunday afternoon.

The run saw approximately 700 individuals run or walk through the five km trek while also raising $162,778 for the Canadian Breast Cancer Foundation. Live music by Crazy Anne, a local band who has performed three years in a row at the run, was heard through the downtown streets all afternoon. A bouncy castle was set up for children and face-painting booth were also on-site.

A very brave and encouraging speech was given by this year's honorary chair, Dianne Nabuurs. She stood proudly in front of the entire group and told her personal story and her experience with having breast cancer.

Nabuurs was diagnosed with breast cancer three years ago. She said she found the lump herself. Nabuurs was chosen as the honourary chair because of her community involvement and because of her amazing survival story. She said was happy to be involved with the run on Saturday and that she could share her story.

"I had surgeries, radiation and chemotherapy. I am now cancer free and it has been three years last March. I have always done the Run for the Cure but two years ago it meant a lot to me because I was a survivor," she said.

"It was emotional, in the beginning I was scared, until I had the diagnoses confirmed it was very scary. But afterwards there was relief, and some hope in there that there would be a cure. I am very thankful, the big thing for me is the support I had from family and friends when they found out," Nabuurs added.

Melissa MacDonald, communications officer for Canadian Breast Cancer Foundation and CIBC Run for the Cure, said the event was very successful even with the light rain.

"People still came out in support and to raise money in creating a future without breast cancer," she said.

MacDonald said they wanted to do something special this year. A "survivor tent" was set up in the middle of the park. The whole tent was decked out in pink and a photo booth was set up.

"It is just a creative space where people can go who have been touched by breast cancer. To go in and take a minute and appreciate or be appreciated. People are getting their photos done with friends and family, its just kind of fun," said MacDonald.

The idea of a "survivor tent" was initiated by Stacy MacWilliams, a breast cancer survivor and last year's honorary chair.

"She is a committee member and she's also a survivor. She thought this was something that was missing from the event and came to the committee with the idea," MacDonald said.

"This year we noticed there is a huge trend with people making online donation, and that is so awesome. We would like to make more than that today, and that would be really great," she said.

"If not that's okay too because the really important thing to know about this event is to know that 95 per cent of the dollars raised on the Island actually stay in Atlantic Canada," said MacDonald.

This money goes towards research at universities in this region. It also goes towards activities and fundraisers held for survivors such as the Look Good Feel Better program which helps make survivors feel better about themselves. "For people who are going through treatment. It's so amazing. The other five per cent goes towards other research projects taking place across the country, chosen by the Canadian Breast Cancer Association if they think the program is the most promising," MacDonald said.
Posted by jypsy at 6:13 PM