Why we won't be at the new Autism Run this Sunday 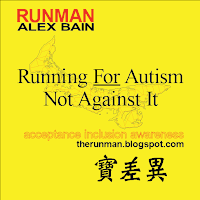 No, Alex will not be at the new Autism Run (Tracy MacKenzie Memorial Walk/Run For Autism) this Sunday.

Not that he (the most "famous" autistic PEI RoadRunner) was invited (though it appears over 1,000 people were)....

It isn't that we object to Project Lifesaver, the fundraising cause. After all, it was Dennis Debbaudt who first formally introduced the Project Lifesaver program to PEI's Law Enforcement, First Responders and the autism community, in 2006 in the free seminars we presented. Alex ran across PEI, Tip-to-Tip, in The Autistic Celebration Run to raise the money to bring Dennis here to present those seminars.

Debbaudt’s seminars were made possible through the fundraiser of Alex Bain, an 18-year-old Oyster Bed resident with autism, who recently ran nearly 300 kilometres from North Cape to East Point.

“I wouldn’t be here if it wasn’t for what Alex did, so thank you Alex,’’ said Debbaudt.

“It’s a testament to the abilities that people with autism have.’’

That's not a blanket endorsement of Project Lifesaver - it is a monitoring device, used and useful far beyond the autistic population, and with that comes ethical concerns. It is a tool. It will not necessarily keep a child from being hit by a car or drowning etc. It cannot & should not replace supervision. Every child up to age 6-7, not just autistic children (according to Dennis Debbaudt), is "at risk" and would be a candidate for a Project Lifesaver tracking device as well as adults with Alzheimer's/dementia, and other conditions in life.

I have had one previous, brief, contact with Ms. Mcquaid. In September 2009 I posted here on Alex's blog about an Autism Speaks PSA video I described as "dehumanizing, hateful, stigmatizing, ableist, fear-mongering, shameful, propaganda."
Please take a minute to revisit that post and see just how strongly I (and others) felt about this PSA: http://therunman.blogspot.com/2009/09/autism-boy-is-alex-bain-autism-speaks.html

This is how this new Autism Run's race organizer felt about this same PSA:

"I personally love this video. To me it speaks fact and truth and my life. I find inspiration and strength in it and have posted on my facebook for all my friends to see."

Click to enlarge & read or go to:
http://facesofautism.wordpress.com/2009/11/01/facebook-fan-page/#comments
Although the link remains on her Facebook Group, the video was long ago totally removed from the Internet.

That's how bad it was. That's how widespread the outrage and opposition to it was.

Autism Speaks, realizing how very badly they screwed up, have removed the video totally from the Web.

Ms. Mcquaid did not. She defended it. She loved it. It spoke fact & truth to her. She was inspired by it.

It spoke dehumanization, hate, stigmatization, ablism, and fear-mongering to me. I was beyond offended by it. 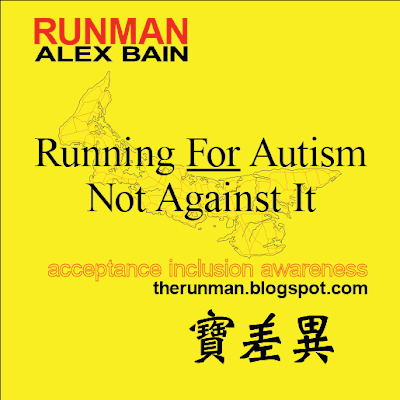 That is why we will not be there. I cannot imagine this event will be respectful to autistics like Alex & I. Not if this organizer's truth, fact & inspiration come from a place where so many of us see "a grotesque travesty of a film, filled with falsehoods, bigotry and hate." Inspiration & strength can be found without hurting a segment of society, without using fear & stigma and offending so many people.

If I were a runner who felt strongly about supporting Project Lifesaver, I'd send the event organizers a cheque and go for a run on one of my own favourite routes.....and along the way, think about Alex and the acceptance, inclusion and autism awareness he runs for every week....

Running For Autism
Not Against It
acceptance, inclusion, awareness
Posted by jypsy at 9:30 PM

We are all parents with autistic children, trying to cope,trying to ensure they have a "normal" life, normal friendships, trying to support with funding somehow to improve access to services. In doing so, we are all volunteers, with FT jobs and FT at home care. I was fortunate to have the finances - many do not. More importantly I had community/school/friend support. My son is now third yr university (Soc Major) and accepted to Cocordia Film Studies. People like Tammy, with 2 small autistic children, working FT and volunteering 24/7 towards improving access to services......should be accolated, not demonized.Project Lifesaver is not a "solution" .... it is as you said, a "tool". A "tool" we so much need.

While I am a parent of autistic children (now adults), "normal" was never my goal. I am not demonizing Ms. McQuaid. Ms. McQuaid, the event organizer, actively supported, shared and defended a video that, as an autistic and as a parent of autistics I was incredibly offended by (and many said "demonized autism"). Why would this autism event not reflect those very offensive beliefs?
Because Alex and I are at virtually every race on the PEI RoadRunner schedule our absence, especially at an "autism run" would be noticed and questioned. This is our explanation. I stand by my final statement "If I were a runner who felt strongly about supporting Project Lifesaver, I'd send the event organizers a cheque and go for a run on one of my own favourite routes.....and along the way, think about Alex and the acceptance, inclusion and autism awareness he runs for every week.... "