The Paralympic Torch Relay has begun 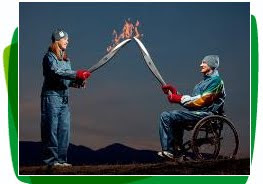 The 10-day, 2010 Paralympic Torch Relay will give many Canadians, young and old, a chance to discover the unique and inspiring stories of Paralympians and other Canadians who defy the odds.

The 2010 Winter Games are Canada’s Games and the Paralympic Torch Relay is an important event to connect Canadians to the Games.

Through public celebrations, school programs and online, the 2010 Paralympic Torch Relay will engage Canadians, and hopefully the world, by demonstrating the fire inside each individual and how it inspires others. It will shine a light on their achievements and celebrate their passion for sports. http://www.vancouver2010.com/paralympic-games/more-2010-information/paralympic-torch-relay/

The 2010 Paralympic Torch Relay in brief:

The 2010 Paralympic Torch Relay will begin in Ottawa on March 3, 2010 and conclude at the Opening Ceremony in Vancouver signalling the start of the Paralympic Winter Games on March 12, 2010 where Paralympians from all over the world will unite to celebrate the possible.

During the Lighting Ceremony, elders from the two First Nations will create and light the Paralympic Flame. The flame will then be brought to Parliament Hill for an event from 10:00 am to 11:00 am. Dignitaries and guests will attend the ceremony, which will also feature entertainment. A total of 16 torchbearers, including 13 selected ambassadors from each Canadian province and territory, will run the first legs of the 2010 Paralympic Torch Relay.

The flame will be extinguished at the conclusion of the relay. During the 10-day relay, local First Nations will create a new Paralympic Flame for each celebration community. Ashes from the 10 community Paralympic Torch Relay fires will form the foundation for the final fire to be lit by a Musqueam First Nation fire keeper. The final Paralympic Flame will be lit from this fire and will be used to light the Paralympic Cauldron at the Opening Ceremony of the Vancouver 2010 Paralympic Winter Games at BC Place. 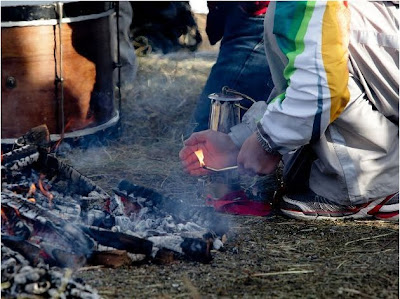 Flame attendant Martie Wyse transfers a flame from a fire started by Algonquin elders into a portable lantern during, the start of the Paralympic torch relay
on Victoria Island in Ottawa, on Wednesday, March 3, 2010. 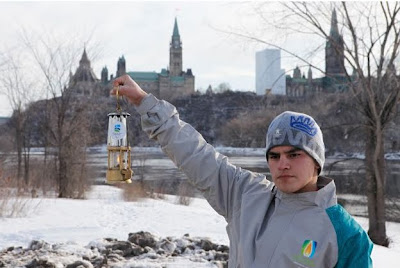 Remember him? He was by Alex's side (and the side of many others)
during the Olympic Torch Run.... 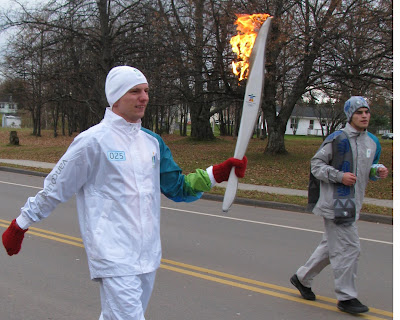 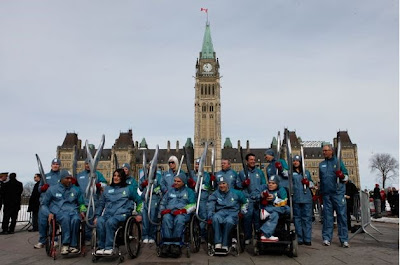 Olympic fever spilled onto Parliament Hill on Wednesday as dozens of schoolchildren, politicians and the public cheered on Canadian Paralympic torchbearers who carried the Olympic flame in a relay after it was ignited earlier on Victoria Island by Aboriginal firekeepers of the Pikwakanagan and Kitigan Zibi Algonquin bands.

More than 600 torchbearers will carry the flame leading up to the start of the Paralympic Games in Vancouver on March 12, and Ottawa was the first stop. The flame will travel to Quebec City today and Toronto on Friday before visiting several British Columbia communities before the Paralympic Cauldron is lit at B.C. Place in Vancouver.

The relay celebrations precede the start of the first Paralympic Winter Games held in Canada. About 1,000 athletes and officials from more than 40 countries will participate in five sports during the games, which run from March 12 to 21 in Vancouver and Whistler.

Arnold Boldt of Moose Jaw, Sask., was the first Paralympic torchbearer to carry the flame from the steps of Parliament Hill down to the Centennial Flame.

Boldt handed the flame to the next in a series of 15 other torchbearers at the ceremony, including Eganville's Justine Belair, who was selected as a representative of Canada's Aboriginal communities. The final torchbearer on Parliament Hill was marathon runner Rick Ball, a 2012 Paralympic Summer Games hopeful from Orillia, Ont. He was selected by the Vancouver Olympic committee.

"It's quite the honour, and I'm very humbled that my athletic compatriots would want me to represent them," Boldt, 52, who has participated in five Paralympics, said after he carried the torch past dozens of schoolchildren and circled the Centennial Flame.

"The kids were tremendous and were very pumped for this. Everyone is enthusiastic about it, and it's great that Canada can host the Winter Paralympics.

"It will be tremendous for the Paralympic movement and for Canadians to see this up close. There has been a lot of media in the last number of months about this, and people are excited about things like sledge hockey and hockey."

Boldt said he expected the same Olympic spirit that Canadians exhibited during the Winter Olympics in Vancouver would carry over when the Paralympics Games begin next week.

CBC Television host Rick Mercer was also one of the 16 Paralympic torchbearers on Parliament Hill on Wednesday. He said he was chosen by British Columbia to represent the province at the ceremony.

"It was suggested that they ask me because I had so many Paralympians and Olympic athletes on my TV show over the years, so I was flattered to be asked," Mercer said.

Furlong said Canada came together as a nation during the Olympics in a way that nobody could have imagined.

"What we've seen over the past days has been astonishing; there are few words left to describe all of what we have seen and felt," Furlong said.

"But we're at the halfway point of this great adventure and now we're about to start phase two," he said, adding that excitement about the Winter Paralympics was building. "The Paralympic movement in this country is very large and grand and Paralympic sport plays right to the human spirit."

Furlong said Vancouver and Whistler were ready to welcome the athletes who will be participating in the games.

The flame was lit on Victoria Island and blessed by Algonquin elders before being brought in a lantern to Parliament Hill, where it was passed to three youth representatives from the Assembly of First Nations, Inuit Tapirit Kanatami and Metis National Council.

Find results, video, photos and much more on our dedicated site