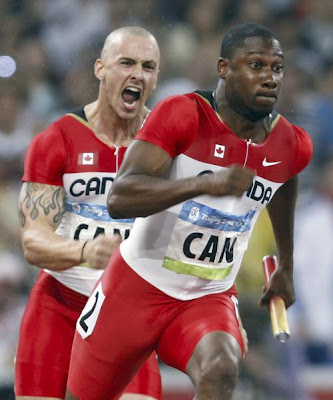 BEIJING — Jared Connaughton’s not done yet at the 2008 Summer Olympic Games.
The New Haven native is moving on to the men’s 4 x100-metre relay final after the Canadian team of Hank Palmer, Anson Henry, Connaughton and Pierre Browne ran a 38.77 to finish second in their heat on Thursday in Beijing, China. The final goes today at 11:10 a.m. Atlantic time.
Connaughton didn’t make the final of the 200-metres, but helped Canada qualify for its first 4 x100 final since winning gold in Atlanta in 1996 — despite a wet and treacherous track in which South Africa, Nigeria, Poland and the vaunted United States all dropped the baton in the first heat.
Canada appeared to be in some trouble in heat two, but an exceptional handoff between Connaughton and Browne got Canada past both Germany and France.
“It’s tough to tell because the stagger is so big,’’ said Connaughton. “We were in Lane Two. Anson and I were talking about it and we felt out of it, but when I rounded the bend we were in it. We’re in a middle lane (tonight) so things will be different. I think we’ll really challenge for the victory.’’
Canada’s 38.77 was the night’s fourth fastest clocking. Trinidad and Tobago was the fastest quartet with a 38.26, just ahead of Jamaica’s 38.31. Japan was third in 38.52. The Netherlands (38.87), Germany (38.93) Brazil (39.01) and China (39.13) will also get to run for gold.
The Jamaicans, who rested Usain Bolt — the double gold-medallist and world record holder — cruised to an easy win in the heat in 38.31. Great Britain and Italy were disqualified. The other heat had even more mishaps, with just four teams of eight teams crossing the finish line. The Americans dropped the baton on the final exchange, while Nigeria, Poland, and South Africa also didn’t finish. The Canadians came into the Olympics ranked sixth in the world.
Posted by jypsy at 8:48 AM