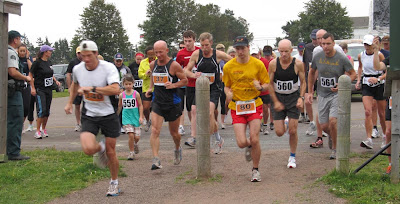 It was cloud and few showers and 17 degrees.

The PEI Law Enforcement Torch Run for Special Olympics at Cavendish Grove formerly Rainbow Valley. The out and back course on trail and national park. Jamie Mutch won the 10km race and Loretta Van Ekris for the top female.

I finished more than 10km in 54:58, made a wrong turn and came in 9th out of 17 runners. Steven Baglole won the 5km race and Sheila MacMurdo for the top female.