First across the Line at The Run For The Cure 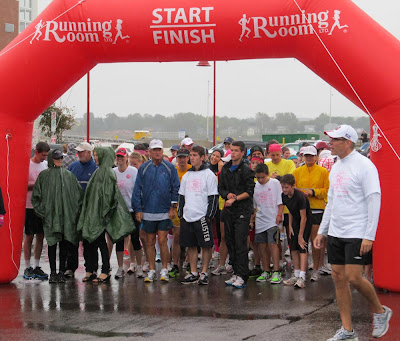 It was cloud and rain and 14 degrees.

The Run For The Cure at Confederation Landing. The out and back course on Old Charlottetown and Victoria Park.

I won the race, finished in 19:11 and male 1st place medal. Jennifer Pizio-Perry for the top female. 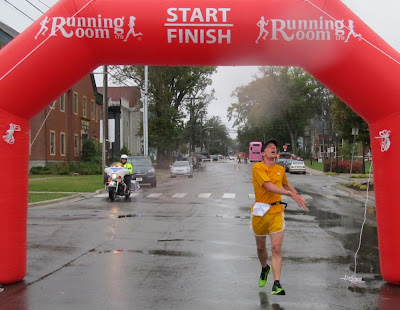 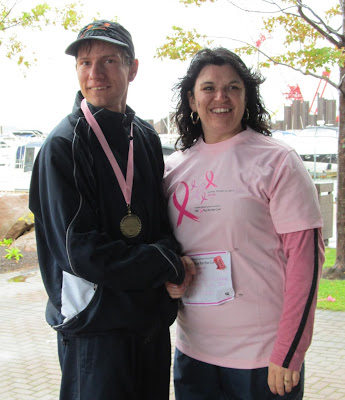 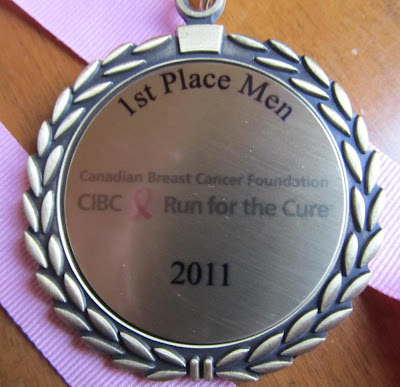 Rain fails to dampen support for

CIBC Run for the Cure

The colour pink has taken on a lot of meaning over the past two years for Stacy MacWilliams of O’Leary.

MacWilliams was 35-years-old, raising her one- and three-year-old daughters, Kari-Lee and Kalyn, along with her husband Rodney, when she was diagnosed with breast cancer in March 2009.

Two years later, MacWilliams has had two lumpectomies to remove the tumour, six rounds of chemotherapy, 29 rounds of radiation and has been on the drug Tamoxifen for two years with three left in the treatment.

“I can’t stress the importance of early detection enough,” said MacWilliams, this year’s honourary chair of the Charlottetown Canadian Breast Cancer Foundation CIBC Run for the Cure. “It saved my life.”

MacWilliams told her story to the roughly 900 supporters of the run at Confederation Landing Park Sunday.

A pounding rain didn’t stop runners from supporting the struggle against breast cancer, with the day seeing about $183,000 raised for the cause. The number is nearly $10,000 more than last year’s $175,000 total.

Co-chair Leone Dixon added that donations are still coming in and that any fundraisers who didn’t make the event Sunday can still turn in money at the Queen and Grafton Street CIBC branch.

Participants clad in pink, soaking wet and clutching umbrellas made their way to the starting line by Founders Hall, focused on the one or five-km treks they were about to take.

“Cancer doesn’t take a break and we’re not going to let anything slow us down, are we?” said Dixon, to loud cheers from the crowd.

In its 15th year in Charlottetown, Run for the Cure has attracted the young and old, those affected by breast cancer and some who aren’t.

While breast cancer hasn’t affected Lewellyn’s own family, the young man has been tireless in his efforts to support the cause.

He’s spent many Sundays during the past four years collecting donations door-to-door, sometimes putting in seven hours a day.

“I thought of doing barbecues or other kinds of events, but going out myself is the easiest way to do it,” said Lewellyn. “One day, I was able to raise about $650 just going around to people’s houses.”

During his first three years, Lewellyn raised more than $4,500 for the cause.

While he doesn’t raise the money for recognition or popularity, Lewellyn said he believes more young people should fundraise.

“People should do it (fundraise) or at least try to do it to help a cause and to help other people.”

The first few months of MacWilliam’s diagnosis was made easier by the support of family and friends.

Life-long friend Mary Ellen Rennie decided to support MacWilliams by assembling a team for the 2009 Run for the Cure.

“Stacy’s Arsenal” came together to help fight the disease threatening MacWilliams. While the team began as a couple of friends, it quickly turned into a group of more than 40 raising about $9,600 for the 2009 run, which was held just two weeks after MacWilliams finished her chemotherapy.

She completed the entire five km walk, much to the cheers of her husband, family and friends at the finish line.

In 2010, the group raised just more than $15,000, with that number having slightly increased this year.

The original small team has grown into a movement across the country, with “Stacy’s Arsenal” running as a national team in events in the Niagara Region of Ont., captained by MacWilliam’s friend Shelley Grffin, and in Regina, led by another friend Denice Hrynowetsky.

For MacWilliams, the Run for the Cure gives her hope for her own daughters’ futures.

“I am hopeful that my girls will grow up without knowing what chemotherapy, radiation and lumpectomies are,” she said. “I look forward to the future and I’m confident together, we will find a cure for breast cancer.

Bar Wars wrapped a successful third annual fundraiser for the Canadian Breast Cancer Foundation CIBC Run for the Cure with the Pink Jug Award going to Yogi’s Bar and Grill for their fundraising efforts of $2,552.25 during Think Pink Week.

The combined efforts of the Pilot House, Outriders, Ise's Bar, The Globe, Saint James Gate, Old Triangle, Merchantman Pub, Boston Pizza, Yogi's and Dooley's Kent raised more than $8,500 for breast cancer research in Atlantic Canada and an increase of 20 per cent over the 2010 total.

Each restaurant had their own reason for raising money for the CIBC Run for the Cure during Think Pink Week but creating a future without breast cancer was a common theme.

"Originally, for us, it was a challenge by another participant. But I have daughters and granddaughters and it's important to find a cure for the next generation," said Stella Arsenault of Yogi’s Bar and Grill.

This is the 15th year the CIBC Run for the Cure has been held in Charlottetown and every year the support in the community grows.

"I am extremely pleased and grateful for the participation of these community minded businesses toward a cause that is important to all of us," said CIBC volunteer committee member Glenn Trueman.

Charlottetown hosts Run for the Cure Almost 1,000 people took part in the Run for the Cure in Charlottetown, P.E.I. on Oct. 2 despite the rain. Similar runs were held in cities across Canada for the annual charity event that raises money for cancer research. (CBC)

A sea of pink descended on Charlottetown on Sunday for the Run for the Cure, raising more than $180,000 for breast cancer research.

Almost 1,000 Islanders showed up despite the wet weather with many carrying umbrellas or wearing pink rain coats. Runs were also held in cities across Canada.

Stacy MacWilliams, this year’s honorary chair and a breast cancer survivor, said family and friends play a key role in the fight against the disease.

“I can’t image how people do it that don’t have a great support network because it’s tough,” she said.

“It’s pretty fantastic for people to know that people are there cheering for you, you know, and helping you through it and being there when you needed them,” MacWilliams said.

The Canadian Breast Cancer Foundation CIBC Run for the Cure is an annual charity event that takes place in 60 communities across the country.