The Fall Frolic - another Personal Best 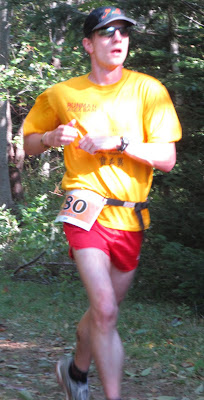 It was sunny and 13 degrees.

Steve Baglole won the 12.3km race and Jackie Chaisson for the top female.

Edwin Gillis won the 4.6km race and Sara Walsh for the top female.

Main photo: About 100 people came to the New Harmony Demonstration Woodlot near Souris on a cool, clear Saturday morning for the 12th annual Fall Frolic run. The participants raised $1,060 for the MacIntyre House in Souris. Here, a few keen runners jump to an early lead at the start of the run. Jonathan Charlton photo

Top right: Twenty-one month old Brynn Steele took advantage of the ride offered by 15-year-old Connor Laird. Brynn is the daughter of Alicia and Danny of Gaspereaux and Connor is the son of Kurt and Robin of Cardigan. Jonathan Charlton photo