This Journey Began Before Starting Line 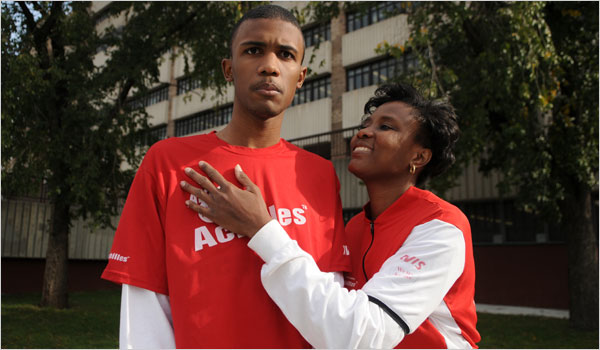 Rob Bennett for The New York Times Nadine McNeil will compete in her fourth marathon,but it will be the first for her 18-year-old son, Tyler, who is autistic.
By CHARLES WILSON
Published: October 31, 2008

Nadine McNeil will reach the crest of the Verrazano-Narrows Bridge on her handcycle soon after 7:30 Sunday morning. Moments later, she will roll swiftly past her 18-year-old son, Tyler, who is autistic. This will be her fourth marathon, and Tyler’s first. She has grown uneasy this week thinking of the moment when she will leave him behind.

Though joint parent-child appearances in the New York City Marathon are not uncommon — Rod Dixon, the race’s 1983 champion, is returning this year to run the race with his daughter — the path that brought Nadine, 42, and Tyler to the marathon is an unlikely one. Nadine had a stroke when she was 8 and lost the use of her right arm and her right leg. Tyler, her only child, is severely speech-delayed. Even now at 6 feet 4 inches, he communicates verbally by using one or two words at a time.

Nadine has poured her life into her son. Tyler, in turn, is what she calls “my right arm.” He compensates for her disabilities by tying her shoes. He does her buttons and zippers. If she tries to put on her coat, he will immediately rush to her side and gently lift her right arm into the sleeve.

Neither would have ever made it to this year’s starting line without the other.

Their path to the marathon began when Tyler was 7. Nadine arrived with her son at Hunter College to see the director of Project Happy, a program that provides athletic and recreational activities to New York City youth with disabilities. Nadine was by then a single mother living in the Bronx. She had already been turned away from athletic programs at the Bronx Y, the 92nd Street Y and the 53rd Street Y because of Tyler’s tantrums and other behavior.

“He came in with his mother,” said Penny Shaw, the 71-year-old director of Project Happy. “He had no language. He did nothing but scream. We had never seen a child like that, and we certainly had never taken one into the program. But the mother was so nice, I said we would try.”

Soon after Tyler enrolled, Shaw and her staff recognized that he was a natural athlete. When he picked up a basketball, he would throw it in the hoop with almost mathematical precision. Nadine had also started taking Tyler to Achilles Kids, a running and rolling program for children with disabilities. To get him to events, she had to leave the Bronx for Manhattan at 5:30 a.m.

Tyler’s behavior began to improve during his involvement in Achilles Kids and Project Happy. He has since won dozens of medals in the Special Olympics, particularly in swimming. “This child was saved by sports,” Shaw said.

Nadine had never considered that athletics could serve a similar role in her own life. At Achilles Kids, she would guard the bags and the coats while Tyler ran. One day in August 2006, Dick Traum, an amputee who founded the Achilles adult program, mentioned to Nadine that she should consider racing in a marathon.

Three months later, in November 2006, Nadine found herself at the starting line in Staten Island. She had attached her paralyzed right arm to the handcycle’s pedal mechanism with duct tape from Home Depot. She powered the chair with her left arm and finished the marathon in 4 hours 3 minutes.

As Nadine trained for more races, Tyler would jog by her wheelchair. Nadine began to notice a difference in her supposedly frozen arm: It had gained some power and even some range of motion. Her doctor noticed, too.

“It has become much stronger in just the past year with all the practice she’s had,” said Regina Coyne, Nadine’s general practitioner.

Last November, Tyler became confused when Nadine boarded the bus to travel to the marathon starting line. He wanted to go with her. His mother convinced him to let her go by saying that he was not allowed to run the race until he was 18.

After Tyler turned 18 in July, Nadine took him to his doctor, who performed an EKG and said Tyler was physically capable.

Tyler’s school for special-needs students in the Bronx, P.S. 176, held a pep rally for him Wednesday. He marched around the seating bowl of the auditorium while holding an American flag, and his fellow students — some of them holding purple, green or orange pompoms — sang karaoke versions of “My Country ’Tis of Thee,” “We Will Rock You” and “We Are the Champions.”

One of Tyler’s friends, Sean, 19, who is also autistic, took the microphone and said solemnly: “Tyler, I have two words to say to you: Good luck at the marathon, and I love you.”

Tyler will run the race with one of his special-education teachers, Vinny Bruno. His mother has decided not to try to slow her chair and ride beside him. After 18 years, she wants to allow him to become more independent — a shift that is as difficult for her as for him.

She thinks back to when he was 3 and the doctors suggested that he would never even be toilet trained, let alone be an athlete. She has had trouble sleeping this week, mostly because she knows him so well.

More Articles in Sports » A version of this article appeared in print on November 1, 2008, on page D5 of the New York edition.
Posted by jypsy at 12:05 PM