April 12th - Terry Fox Day. Some of the Tribute Runs across Canada 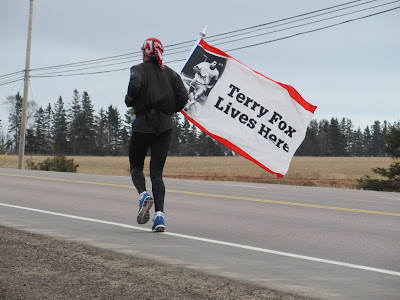 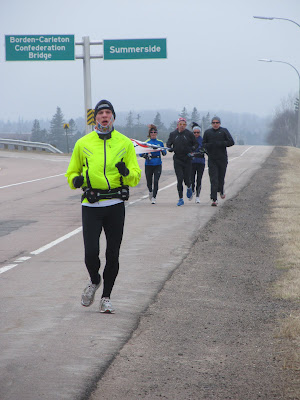 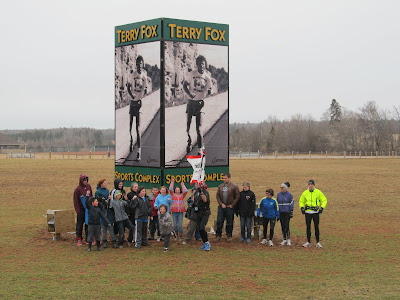 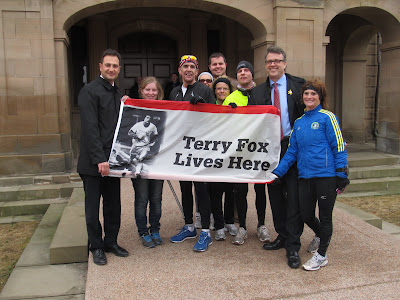 Gaudet marks April 12 with run in honour of Terry Fox 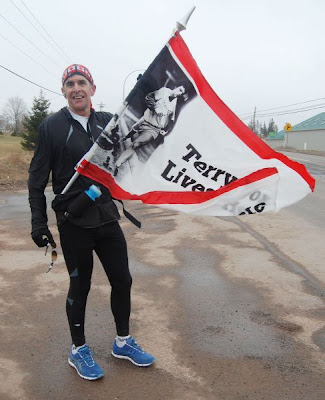 Michael Gaudet passes through Cornwall during his Borden-Carleton to Charlottetown run, part of a national movement to mark April 12 as Terry Fox Day in Canada Guardian photo

Michael Gaudet doesn’t describe the more than 50-km trek he made from Borden-Carleton to Charlottetown yesterday as merely a “run”, but as a celebration of Canadian hero Terry Fox.

The 59-year-old Summerside resident laced up his running shoes exactly 32 years after Fox began his 1980 Marathon of Hope, re-tracing the same route the young runner took while he was on P.E.I.

The goal was not to raise money, but rather to have April 12 recognized nationally as Terry Fox Day, a grassroots effort started by Montreal resident and cancer survivor Eddy Nolan.

Gaudet said that Fox has always been a hero to him, as well as many others, for a number of reasons.

“There’s not a family I know that he (Fox) hasn’t touched through his Marathon of Hope. Six hundred million dollars has been raised in his name,” said Gaudet. “On top of that, what we did today (Thursday) was one day. He did it for 143 days with one leg. You just have to put your head behind that and realize that not only was he a hero but just an absolutely incredible athlete.”

Gaudet wasn’t alone in his P.E.I. effort. While no one else completed the entire trek, numerous runners joined him for pieces of his journey throughout the day.

Even during times when he ran alone, there were often passer-bys to lend some encouragement.

One highlight came when Gaudet passed Englewood Elementary school in Crapaud where students were waiting outside to cheer him on.

“That was very touching,” he said. “And there was a gentleman who came by in a transfer truck and he rolled down his window and came to a stop and yelled ‘three years cancer survivor’.”

“There was all kinds of people beeping their horns, so you just realize that there is so many people that have been touched, and continue to be touched, by Terry Fox.”

Armed with a flag showing a picture of Fox running and text saying “Terry Fox Lives Here,” Gaudet ended his run at Province House. Gaudet was greeted by Premier Robert Ghiz and Health and Wellness Minister Doug Currie before the runner presented his flag to the two.

Currie said the Marathon of Hope Fox created continues to be an inspiration to Canadians.

“His legacy and his memory and what he’s done for cancer research and the ongoing fight against cancer is just amazing really. Today is just another day to create awareness and to keep his legacy alive to continue fighting cancer,” said Currie, who also commended Gaudet on his effort. “For him to sort of publicly awaken that and bring attention to that is extremely admirable on his part.”

However, for Gaudet, making the trek was easy to do after having seen many loved ones affected by cancer.

“I’m 59-years-old so I’ve buried some really close friends that have been touched by cancer, my father as well as my good friend and mentor,” he said. “Terry Fox has extended an awful lot of those people’s lives, through $600 million he has touched a lot of people and kept a lot of people around for a lot longer.”

“This was an easy run for me to do. It wasn’t a run, it was a celebration for Terry Fox.” 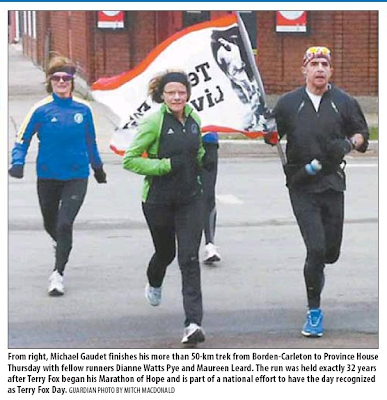 ~*~
Eddy Nolan of Montreal reached out to runners across Canada and found someone in every Province to run a Tribute Marathon to Terry on April 12th 2012. Here's Eddy's story

Today marks the 32nd anniversary of Terry Fox's marathon of hope. Eddy organized one person in every province

to run today and his goal is to get April 12 recognized as National Terry Fox day.

cheer him on. Photos courtesy of Anne Leclair, Global Montreal.

Mom runs Regina to Lumsden in memory of Terry Fox 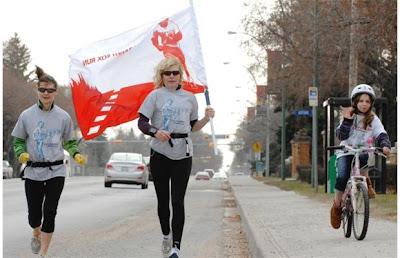 Nina Hurlbert (L) Colleen Ridgway (C) and Ridgway’s daughter Shelby Henderson (R) ran and biked from Regina to Lumsden on Thursday, joining athletes in each province who each ran marathons commemorating the 32nd anniversary of the start of Terry Fox¿s cross-Canada journey. Photo taken in Regina on April 12, 2012.

REGINA — With steely clouds in the sky and a blustery wind at her back, Regina mom Colleen Ridgway started warming up in front of Government House on Thursday morning, before taking off on a run to Lumsden.

As she pounded the pavement heading north on Highway 11, Ridgway joined athletes in each province who ran marathons commemorating the 32nd anniversary of the start of Terry Fox’s Marathon of Hope.

Ridgway’s friend, Nina Hurlbert, and her daughter, Shelby Henderson, accompanied Ridgway on the journey, eight-year-old Shelby riding her bike alongside her mom inside the city limits.

It was Ridgway’s first marathon since she ran the Calgary Marathon in 1998, but she was wasn’t about to let that — or an injured foot — stop her.

“I really admire what Terry Fox did and that he didn’t give up when the going got tough,” she said.

Ridgway got involved in the run after being contacted by her cousin in Alberta, who was the representative for that province.

The whole thing was organized by Eddy Nolan, who is a friend of the Fox family and has been running a marathon each year in Terry’s memory.

“My own family has been touched by cancer over the year, and I think most people have,” she said

“When my cousin said Eddy was still looking for someone in Saskatchewan, I agreed to do it,” she said.

That was about a month ago.

Despite her foot injury, Ridgway continued to train, logging a few long runs each week and around 27 kilometres on the weekends.

The Leader-Post caught up with Ridgway after her run, which only ended up taking about 3½ hours.

“The wind really helped us a lot,” she said.

“It was really, really windy out there on the highway. At times Nina and I grabbed each other’s hands after a really strong gust because it was blowing so hard.”

Ridgway, also a teacher in Regina, plans to share her story with her students after the Easter break, and said her school and her daughter’s have raised thousands of dollars for the Terry Fox Foundation over the years.

While she would “definitely” do it again in the future Ridgway said she would like to offer the chance to other people in Regina.

“This was really a tribute to Terry Fox and everything he did, and it’s helping to keep his memory alive,” she said.

“As Terry said, you feel the fear but you do it anyway.

“Not doing it just wasn’t an option.” 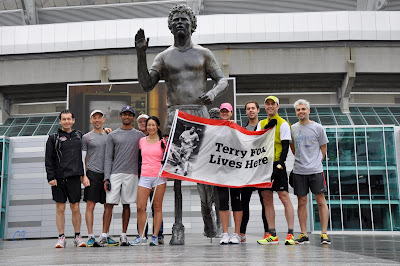 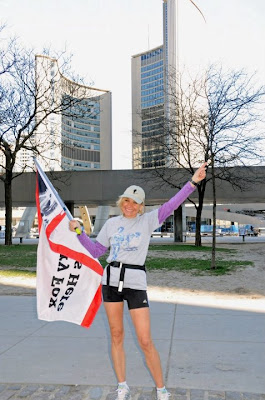 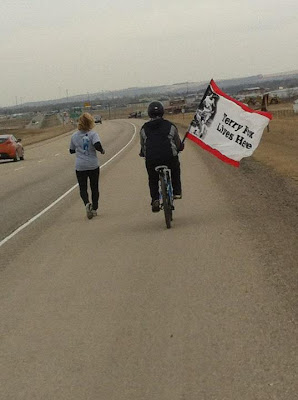 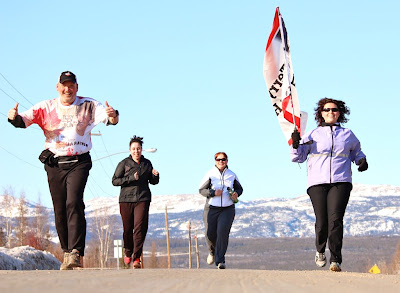 1- Alasdair Veitch representing N.W.T./ Nunavut/ Yukon.
Running route will be through the town of Norman Wells.