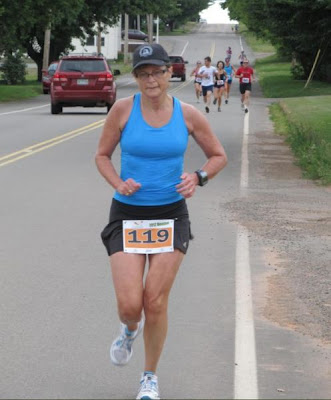 Beverly Walsh had just crossed the finish line at the Boston Marathon Monday when she turned around and saw two bombs exploding along the route where she had been running just moments earlier.

“I didn’t know what it was right away. I thought, ‘Bomb,’ and then I thought no, that’s being too negative,” Walsh said in a telephone interview with The Guardian Monday evening.

That’s when someone told her to start running again – this time for her life.

Her husband was nearby, waiting to watch her finish the race. Walsh could see him, but could not get to him.

“He was in the family area where I couldn’t get, then he cut out in front of me running and I shouted to him, so we were together,” she said.

“Then I thought, ‘Well at least we’ll die together.’ I shouldn’t be saying that, but that’s what went through my mind.”

Walsh was one of 19 Islanders running in the Boston Marathon Monday when two bombs exploded near the finish line, killing at least three people and injuring over 140 others, according to numbers released at press time.

Dianne Pye of Charlottetown was still running the marathon when she heard the twin blasts.
She was half a kilometer from the finish line.

“I could hear them when I was running but, of course, did not realize at the time what the explosions were. It almost sounded like people banging on drums,” Pye told The Guardian in a telephone interview.

She kept running, pushing hard now for this last leg of her race when someone began yelling and people around began stopping.

“I stopped because everybody was stopping and they made an announcement that we couldn’t go because there were bombs at the finish line,” Pye said.

Once she heard this, her immediate concern was her husband’s safety.

“Where is my husband and what has happened to him, that’s what was going through my mind,” she said.

Her husband Grant was at the finish line, waiting to watch her cross when the explosions went off.
He had been tracking his wife’s progress online and knew she was close when he saw the blasts of smoke and fire that sent people running and screaming in all directions.

He tore down the fence in front of him and went rushing toward the finish line in an attempt to find her.

“He was afraid at that point, because they were saying that there could be more (bombs),” Pye said.

“All he could think about was how close I may be to the finish line. He knew I should be coming anytime.”


“Then I thought, ‘Well at least we’ll die together.’ I shouldn’t be saying that, but that’s what went through my mind,” - Beverly Walsh

He was quickly stopped by officials who herded him and other concerned spectators to a location further away from the scene.

Meanwhile, Pye had also been ushered to a secure area with other terrified runners and spectators.
No one knew what was happening and everyone was worried about friends and family.

“People were crying and there were a lot of female runners who were very upset and worried, because of course we all have family at the finish line and we didn’t know who was injured and who wasn’t injured. It could have been any one of our family members,” Pye said.

Finally, she was able to get to her belongings where she used her cell phone to call her husband. They were both so relieved to hear of each other’s safety.

Another Islander, Kimberly Bailey, was also running in the marathon on Monday. She had her headphones on and was about 700 metres from the finish line when she was met with a wall of runners who had stopped suddenly.

Bailey said she just couldn’t believe it was a bomb.

“I was just stymied by it and really in disbelief. I thought there must have been an electrical explosion, it’s an old city.”

A marathon veteran with over 60 races under her belt, Bailey said she never imagined this marathon would be one to be concerned about.

“I’ve done crazy Canadian death races, the ‘sinister seven’ where you’re out by yourself in the woods at night with bears,” she said.

“If I thought I was going to be in any kind of risk, it would have been being attacked by a bear or a cougar in the north of Alberta, not at the Boston Marathon.”

It has been reported to the P.E.I. Roadrunners all marathon participants from P.E.I. are safe.